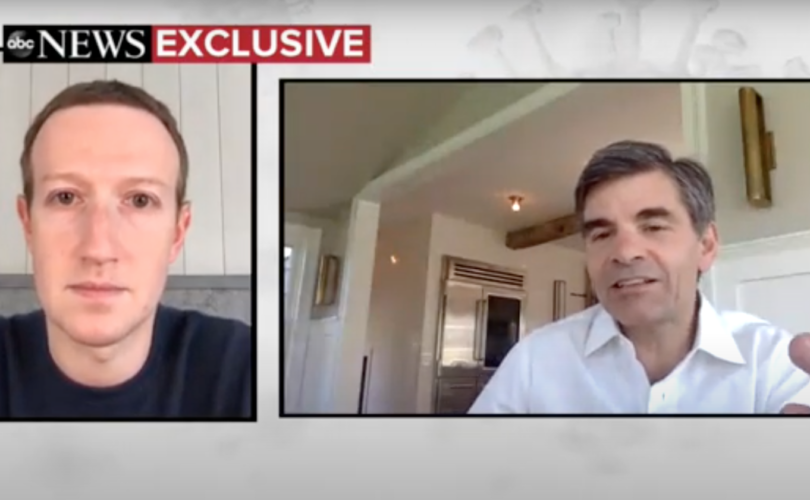 April 20, 2020 (LifeSiteNews) – Facebook founder and CEO Mark Zuckerberg announced today that he considers protests against regional stay-at-home orders being organized on Facebook to be “harmful misinformation” that must be deleted.

In a video interview this morning, ABC’s George Stephanopoulos asked the social media titan, “How do you deal with the fact that Facebook is now being used to organize a lot of these protests that defy social distancing guidelines? If somebody is trying to organize something like that, does that qualify as harmful information, because it’s saying ‘defy social distancing’?”

“We do classify that as ‘harmful misinformation’” responded Zuckerberg,  “and we take that down.”

“At the same time, it's important that people can debate policies,” continued Zuckerberg, “so there's a line on this.”

“But, you know, more than normal political discourse, I think a lot of the stuff that people are saying that is false around a health emergency like this can be classified as harmful misinformation that has a risk of leading to imminent physical danger and we’ll just take that kind of content down,” he added.

Over the last week, protests have been successfully organized in other states, most noticeably in Michigan, where thousands who participated in “Operation Gridlock” descended on the state capital in their cars and trucks to demand that onerous restrictions be lifted.

The policy is already taking its toll on would-be-protests.

Save Jersey reported that they were “thrown a curveball” when Facebook took down the grassroots organization’s event page.

The “Open New Jersey” rally – planned for Tuesday, April 28 at the Trenton War Memorial – was informed by Facebook that its event page violated the social media platform’s community standards. Specifically, Facebook warned that it was “coordinating harm and promoting crime.”

Shortly before the page was shut down, anyone viewing the page was prompted to review social distancing guidelines; Facebook also warned that everyone should “avoid large gatherings during this time.”

Organizer Angela DeVoe of Forked River told Save Jersey that she plans to move ahead with the rally, which at the time the page was shut down, had attracted the interest of more than 800 individuals.

“We would like the governor to recognize that most of us can return safely to work by May 1, 2020,” said DeVoe. “Small business should be open and allowed to operate immediately. The parks and beaches shall resume operation. We should be able as Americans to the make choices for ourselves and our families that best coincide with our individual needs.”

Facebook’s condemnation of the protest rallies notwithstanding, President Donald Trump has signaled support for the state and grassroots protesters who are seeking to save a rapidly deteriorating local economies.

While Facebook is busy banning the organizing of regional stay-at-home protests – whether or not organizers advise “safe distancing” – the reliability of one of the social media platform’s “fact checkers” is being questioned.

A Duke University scientist who helps Facebook identify false information regarding the coronavirus pandemic has been found to have ties to the Wuhan biolab where the virus most likely originated.

The connection calls into question her ability to render agenda-free, independent judgments.

Investigative journalist Sharyl Attkisson, esteemed for her nonpartisanship, tweeted, “If you follow the info, you will find the Facebook fake fact-checker on the China Wuhan lab is a scientist who works/worked at China's Wuhan lab the past two years and says it is impossible that they would be sloppy because they are very careful!”

If you follow the info, you will find the Facebook fake fact-checker on the China Wuhan lab is a scientist who works/worked at China's Wuhan lab the past two years and says it is impossible that they would be sloppy because they are very careful! ����@Facebook https://t.co/Ldvu7He82v