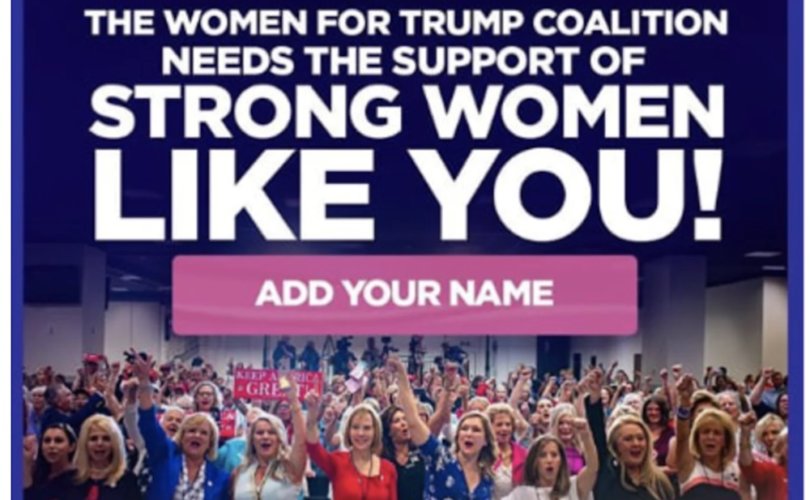 August 22, 2019 (LifeSiteNews) – Facebook has confirmed it pulled a seemingly-innocuous campaign ad asking women to support President Donald Trump, even as the social media giant released an audit report pledging to crack down on partisan bias.

“The Women for Trump Coalition needs the support of strong women like you!” pic.twitter.com/vR2QzNAFq5

However, Popular Information reported three days later that they notified Facebook the ad appeared to violate the social network’s rule against advertising “that asserts or implies personal attributes,” including “direct or indirect assertions or implications about a person’s […] gender identity.”

“We've notified the campaign that the ads violate policy. They can’t continue to run unless fixed,” a Facebook spokesperson responded.

The Trump campaign hasn’t yet responded to The Hill’s request for comment, but Women for Trump and one of the president’s sons both spoke out against Facebook:

This is outrageous and #bigtech needs to be held accountable.

Never fear. They can’t hold us back and they certainly won’t stop the women who ♥️ our President @realDonaldTrump. We will conquer and overcome ladies!https://t.co/0Ums1JlAYX

“Zuckerberg and company don’t want users to know how much data they’ve amassed on them,” conservative pundit Natalie Winters wrote. “Overtly referring to personal characteristics is a red flag for many digital users who are targeted with advertisements. In other words, Facebook wants to privately know everything about you, and sell that data. But it doesn’t want you to know that advertisers can see all that when targeting you.”

The revelation comes the same week Facebook released the first interim report from a team it commissioned to review bias allegations. The report detailed a broad range of conservative grievances against the social media giant, but rendered no verdict on their veracity and pledged few concrete reforms beyond greater “transparency.”