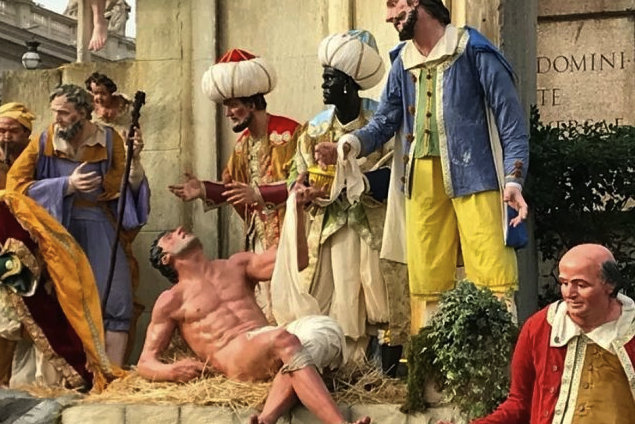 The Vatican crèche was donated by the ancient Abbey of Montevergine in the Campania region of southern Italy. Its scenery and crib figures, in 18th-century Neapolitan costumes, were produced by artisans in a local workshop. It incorporates vignettes representing the corporal works of mercy, including visiting the sick and imprisoned, burying the dead, and clothing the naked.

“It was this last element that excited the censors at Facebook,” Breitbart said. The manger scene prominently features the figure of a naked man lying on the straw, being offered a cloth by a pilgrim, just opposite where the figure of the baby Jesus will be placed on Christmas Day.

An ad featuring the image of the scene was rejected by Facebook with the following explanation: “Your ad can’t include images that are sexually suggestive or provocative.”

Veteran Vatican journalist Edward Pentin first posted the photo on Twitter on December 12. Since then, it has done the rounds on social media and provoked shock and dismay among many Catholics, some calling it “disgusting” and others suggesting the naked man is “too much a poster boy for the local gym to be a man in need of corporeal mercy.”

Yet others commented: “Despite the weeping and gnashing, the Vatican presepe is doing in traditional Neapolitan style, with somewhat grotesque figures and the crib hidden amongst worldly hustle and bustle, and intentional anachronisms. Depicting the corporal works of mercy is a nice touch.”

The artist behind this year’s Vatican Nativity scene, Antonio Cantone, appeared to suggest that he intended it to be provocative.

“It is not a campy nativity; it is particular and makes you think,” he said. “It leaves no one indifferent; there are provocations.”

In his explanation of the creche at its December 7 inauguration, Pope Francis said: “This year’s Nativity scene, executed in the typical style of Neapolitan art, is inspired by the works of mercy. They remind us that the Lord has told us: ‘Whatever you wish men to do to you, you also do to them’ (Mt 7.12). The crib is the suggestive place where we contemplate Jesus who, taking upon himself the miseries of man, invites us to do likewise, through acts of mercy.”

As in past years, Pope Francis is expected to spend time before the crèche in silent prayer on December 31 after Vespers and the chanting of the Te Deum (an ancient prayer or praise to the Holy Trinity) in St. Peter’s Basilica.