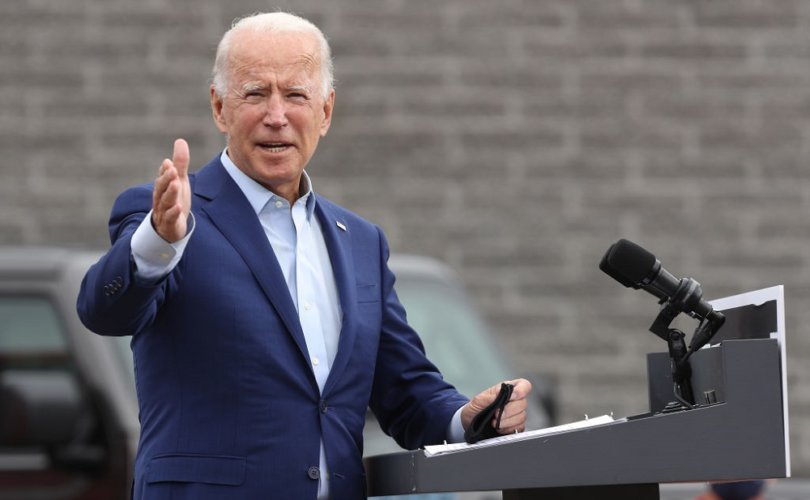 September 16, 2020 (LifeSiteNews) — Facebook has removed an online ad from the conservative American Principles Project (APP) that calls out former vice president Joe Biden and the Democratic party for supporting policies that threaten women’s sports after PolitiFact published a review critical of the ad.

“Today, it has become clear that the greatest threat to free and fair American elections is not Russia or some other nefarious foreign actor; it is America’s own Big Tech conglomerates — Facebook chief among them,” said APP executive director Terry Schilling in a news release.

“It would be understandable, though still very troubling, if Facebook removed an ad for being ‘fact-checked’ as false. However, our ad has not been found false by any fact-checker, nor could it be.”

The APP said that its ad was initially marked by Facebook for “missing context” as a result of the PolitiFact report.

The banned ad urges Michiganders to vote against Biden and Sen. Gary Peters for supporting the Equality Act, noting the effect that legislation would have on girls’ sports by forcing them to play against gender-confused boys, who still have the strength advantage of their respective sex.

“All female athletes want is a fair shot at competition, at a scholarship, at a title, at victory,” says the narrator in the banned ad.

“But what if that shot was taken away by a competitor who claims to be a girl but was born a boy? Senator Gary Peters and Joe Biden support legislation that would destroy girls’ sports. They call it equality. Really? That’s not fair. Not fair at all.”

The “Equality Act” has the support of Biden, and Peters is one of its cosponsors. The act would impose on both public and private entities that they acknowledge and help out individuals who say they are the opposite of their birth sex.

In another news release sent out yesterday, after their ad was marked by Facebook, Schilling said the APP ad campaign makes a simple claim.

“Policies supported by Joe Biden, Sen. Gary Peters and other Democrats would destroy girls’ sports. There is ample evidence for this claim and more coming in every day. Nothing in the PolitiFact review shows this claim to be false,” said Schilling.

The banned APP ad is part of a $4–million digital ad campaign launched in early September to bring to attention the “radicalism” of the Democrat presidential ticket.

“If our nation’s cherished First Amendment protection of free speech and expression is to meaningfully survive in the years to come, then Silicon Valley must change and quickly,” added Schilling.

The APP says it is appealing Facebook’s decision to ban the ad.