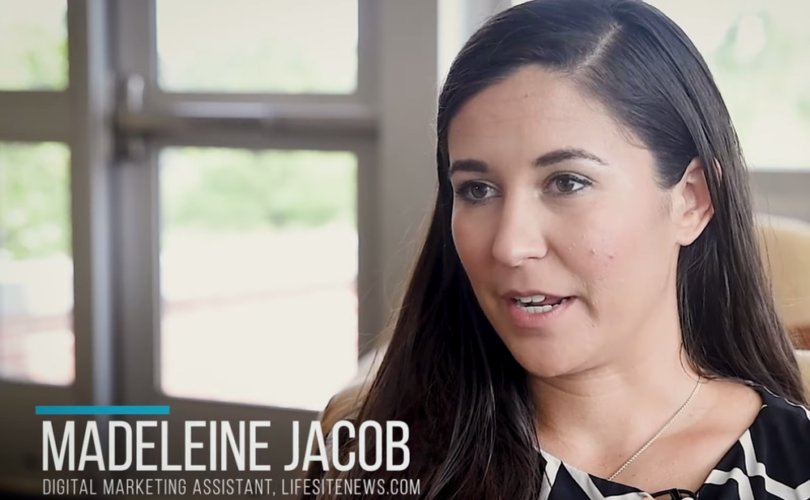 Update: At 6:11 pm EST, shortly after this story was published, LifeSiteNews was informed by Facebook, “It looks like we made a mistake.” The original post was restored and the 24-hour ban lifted after 10 hours.

September 10, 2019 (LifeSiteNews) – A LifeSiteNews staffer has been thrown into ‘Facebook jail’ for 24 hours for having posted an article critical of the “cult of transgenderism” onto one of LifeSite’s Facebook pages where she acts as manager.

Back in early August, LifeSiteNews Digital Marketing Assistant Madeleine Jacob posted a commentary by Radiance Foundation founder Ryan Bomberger in which he criticized TV personality Mario Lopez for quickly backtracking and apologizing to pro-LGBT activists, outraged that he said children were too young to decide whether they should “transition” to another gender.

The article was titled: “Spinelessness won’t cut it in defending our kids from transgender insanity.” Bomberger offered commentary on Lopez caving into the demands of LGBT activists that he backtracks. “So the cult of transgenderism swiftly wielded its fierceness and caused a father to cower in fear. Never mind the dangers we willingly open children up to when we push LGBTQXYZ pseudoscience,” he wrote.

Normally, Jacob would have used a social media scheduling platform that enables media organizations to more easily publish content on their social media pages—but on that particular afternoon, the platform was experiencing technical difficulties, which were later resolved.

Undeterred, on August 1 Jacob manually posted Bomberger’s commentary through LifeSiteNews’ page, an action that required she first be logged into her personal account.

On September 3, as we reported previously, Facebook notified LifeSite that it had removed a LifeSite post linking the article because it “violated Community Standards,” specifically the platform’s definition of hate speech as any “direct attack on people based on what we call protected characteristics” including “gender identity.”

“We define attack as violent or dehumanizing speech, statements of inferiority, or calls for exclusion or segregation,” Facebook declared.

Bomberger’s piece, however, argues that it’s unhealthy to reinforce gender confusion in children, and warns that the broader “gender fluidity” push will “erase” society’s understanding of “actual womanhood.”

LifeSiteNews asked for a review of the action, but the article was not reinstated and the case was marked “closed,” with no path for recourse or further explanation offered.

Then, on September 10 — more than a month after publication of the article and a full week after the article had been removed — Jacob received a notice from Facebook informing her that she had been tossed into ‘Facebook jail,’ prevented from posting or commenting for 24 hours.

A duplicate notice about the action against Jacob was simultaneously sent to LifeSiteNews’ Facebook page and explained that the content she had posted had indeed been deemed “hate speech.” There was no opportunity to click on the “See Details” button, as can be seen in the screenshot below.

LifeSiteNews reached out to a member of Facebook’s Public Policy Team, but no response was received by time of publication.