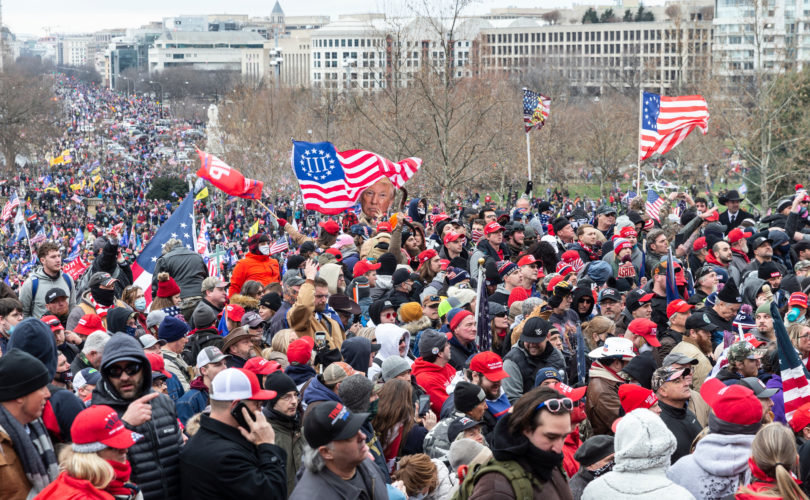 July 26, 2021 (LifeSiteNews) — Facebook will delete the accounts of people charged in connection with the January 6 Capitol riot even if they have not been found guilty, according to The Washington Post.

A June 29 report by The Washington Post stated that Facebook also may put “fact-check” labels on any posts that suggest the events of that day had been staged.

Facebook CEO Mark Zuckerberg has previously suggested that “fact-check” labels are nearly as effective as outright removal of content, saying “95% of the time, users don't click through to the content with a warning label.”

The Post article highlights Alan Hostetter, a former police chief who was at the Capitol on January 6 and now faces felony charges for his alleged involvement in the riot. Hostetter called the Capitol riot a “false flag staged event” and a “fakesurrection” on social media. Hours later, his Facebook and Instagram accounts were shut down. The following week, Spotify and YouTube also removed Hostetter’s content.

According to the article, “Facebook says that it does not allow people charged in the insurrection [sic] on the platform and that it may fact-check claims that the riot was staged.”

Despite Hostetter being arrested by the FBI and saddled with four charges, including conspiracy to obstruct an official proceeding, no evidence links him to actually breaching the building, and prosecutors have not alleged that he did, according to NPR.

“The entire indictment is so corrupt, so full of half truths,“ said Hostetter, who is free pending trial. “I am very much looking forward to my day in court, where not only will I be vindicated, but I will also be part of exposing one of the greatest scandals in U.S. history.”

To date, more than 500 people have been arrested in connection with the January 6 Capitol events.

“This is a political persecution against Trump supporters,” Kelly said.

Among the Biden administration’s “political prisoners” is 27-year-old former Army Ranger Robert Morss, who was arrested in connection with the January 6 riot and is still being held without bond. Kelly reported in an article for American Greatness that prosecutors assert Morss still poses a “future threat.”

Assistant U.S. Attorney Melissa Jackson said of keeping hundreds of Capitol rioters in prison without their constitutional right of a speedy trial: “It is difficult to fathom a more serious danger to the community — to the District of Columbia, to the country, or to the fabric of American Democracy — than the one posed by someone who knowingly and eagerly engaged in a violent insurrection to occupy the United States Capitol and abort the certification of a lawful and fair election.”

To provide proof of Morss’ continued threat to U.S. democracy, federal agents reported that law enforcement had seized such commonplace items as “a ‘Don’t Tread on Me’ flag, a neck gaiter, a military utility bag, a black tourniquet, and military fatigues” in addition to a “fully assembled” Lego model of the Capitol building at Morss’ home.

An updated court filing noted that the Lego set was not “fully assembled” as had been originally reported but was instead in an unopened box.

Morss is still being held without bond after pleading not guilty to all four charges against him. He is set to attend a status hearing August 5.

Meanwhile, 18-year-old homeschool student Bruno Joseph Cua, a “hard-working, kind, respectful, and patriotic” teenager, was also arrested by the FBI for breaching the Capitol building and subjected to harsh treatment.

As previously reported by LifeSite, Cua was indicted by a grand jury on 12 charges, “including assaulting a police officer and possessing a ‘dangerous or deadly’ weapon.” After being kept in solitary confinement for three weeks, he was transferred to Oklahoma City to share a cell with 30 inmates.

Cua’s social media posts played a large role in his treatment, with assistant U.S. Attorney Kimberly Paschall writing in objection to a pretrial release that a “small sample of public social media posts on the platform Parler by the defendant in this case evinces a full picture of who this defendant really is: a radicalized man with violent tendencies and no remorse for his participation in the violent insurrection that occurred at the U.S. Capitol.”

His parents also are on trial. Government lawyers have condemned his mom and dad for taking their son to Washington. One lawyer argued the Cuas weren’t appropriate guardians bc Bruno is homeschooled. This case is an outrage https://t.co/3fuHDKgmgv

According to Kelly, judges and lawyers in the case have routinely regarded the 18-year-old’s doubt that Joe Biden lawfully won the 2020 election as “evidence of wrongdoing.”

“The criminal case against Bruno, however, is weak,” Kelly said. “Did he act badly? Yes. He climbed on scaffolding outside the Capitol building and went into areas he should not have entered; some of his social media posts are alarming but not against the law.”

Cua was arraigned June 2 after pleading not guilty to all counts. According to the Department of Justice, Cua “remains on personal recognizance” with a “[s]tatus conference set for 8/24 at 3:30 pm.”

As the federal government increasingly works side by side with social media to take down information it declares to be false and to persecute political opposition, some individuals simply posting on Facebook about being present at the Capitol on January 6 have been subject to arrest.

According to Business Insider, 55-year-old John Maron Nassif of Florida was arrested in May and charged with violent entry, disorderly conduct, and entering a restricted building or grounds without authority to do so after he posted on Facebook that he had been at the Capitol that day.

“You know I was there, right?” an arrest affidavit said Nassif posted on the site, according to the Orlando Sentinel. “You don't find it odd that [a] police officer is welcoming everybody in? Considering the narrative that's being pushed?”

Accused of “boasting on Facebook multiple times” about being at the Capitol, Nassif now faces a year in prison, another year of probation, and a $100,000 fine, according to the Sentinel.

The Post article also referred to many mainstream conservative talking points as “misinformation” that “social media companies have sought and failed to limit.”

According to the report, “the combination of the pandemic and the election radicalized people and enabled right-leaning groups that were not previously aligned to find one another — creating a mega-network that was fueled by outrage and misinformation.”

Big Tech and law enforcement agencies have been criticized for their apparently unequal treatment of participants in the disturbance at the Capitol compared with violent Antifa and Black Lives Matter (BLM) activists who have spread inaccurate information about police brutality, made threats, and engaged in violence, vandalism, and theft during “protests” that Democrats and members of the mainstream media have called “mostly peaceful.”

Earlier this summer, Facebook “tested” a new feature warning users they “may have been exposed to harmful extremist content recently” and directing users to a variety of “resources,” including a group called Life After Hate, whose self-professed mission is “helping people leave the violent far-right to connect with humanity and lead compassionate lives.”

Facebook’s policy for addressing “movements and organizations tied to violence” focuses on groups considered right-wing, mentioning Antifa once and failing to mention BLM altogether. Facebook’s Mark Zuckerberg has said his site would remove any posts that incite violence, but proclaimed his support for BLM.

According to a report released in October 2020 by the Major Cities Chiefs Association (MCCA), 574 BLM “protests” were declared riots between May 25 and July 31, 2020. More than 2,000 law enforcement officers were injured within the 10-week period, 624 incidents of arson were recorded, and police reported that rioters threw bricks, fireworks, water bottles, and Molotov cocktails.

While more than 16,200 left-wing rioters were arrested during the 10-week timeframe, more than half of all law enforcement agencies and district attorneys declined to prosecute.

Meanwhile, Speaker of the House Nancy Pelosi is setting up a “January 6 Commission” to investigate the “insurrection” at the Capitol, and the Biden administration has prioritized countering “domestic terrorism” in the wake of the January 6 riot that it called an “unprecedented attack against a core institution of our democracy.”