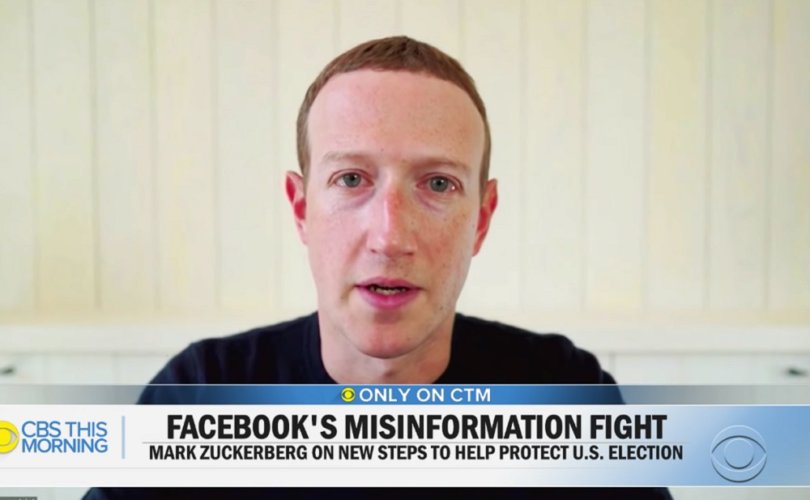 The presidential campaign of President Donald Trump immediately criticized Facebook’s new policy. “In the last seven days of the most important election in our history, President Trump will be banned from defending himself on the largest platform in America,” Samantha Zager, one of the campaign’s press secretaries, stated.

“When millions of voters will be making their decisions, the President will be silenced by the Silicon Valley Mafia, who will at the same time allow corporate media to run their biased ads to swing voters in key states,” she added.

In a press release, Facebook also said it would “remove posts that claim that people will get COVID-19 if they take part in voting, and we’ll attach a link to authoritative information about the coronavirus to posts that might use COVID-19 to discourage voting.”

The social media giant added it would “attach an informational label to content that seeks to delegitimize the outcome of the election or discuss the legitimacy of voting methods, for example, by claiming that lawful methods of voting will lead to fraud.”

This measure could be directed at President Trump, who has warned via Twitter that because of mail-in ballots, “2020 will be the most RIGGED Election in our nations [sic] history — unless this stupidity is ended.”

Prior to that, Trump’s opponent, Democratic presidential candidate Joe Biden, had accused the president of “going to try to steal this election,” without providing evidence to substantiate his claim. “It’s my greatest concern, my single greatest concern,” Biden said.

During an interview with CBS This Morning, Zuckerberg explained that “if people post content that broadly is trying to delegitimize the outcome of the election, either by saying things like, ‘Voting by mail will definitely lead to fraud’ or you know, other things that basically undermine these democratic principles of methods of voting that we know are safe, then we're just gonna add some context to those posts.”

“Oh, this will definitely apply to the president — once this policy goes into place… and it will apply to everyone equally,” the 36-year-old Facebook founder emphasized.

“I have had certain discussions with him in the past,” Zuckerberg revealed, “where I’ve told him that I thought some of the rhetoric was problematic… if I did talk to him, you know, be clear about how — just the importance of making sure that people have confidence in the election.”

Facebook is also going to add a label to posts by a candidate or campaign should he or it try “to declare victory before the final results are in.” Facebook users, in this case, would be directed “to the official results from Reuters and the National Election Pool.”

Zuckerberg, in a separate clip of the interview, expressed his uneasiness with “being the ultimate deciders of what is right and wrong, and true and false, in the world,” but he is willing to “rely on other authorities,” for instance “local elections officials.”

He also said he was worried about there being “a greater chance of civil unrest and violence after the election,” given that “it may take additional time for the votes to get counted this year, especially with mail-in voting.”

Facebook, in another press release, announced that its Messenger would be furnished with a “forwarding limit … so messages can only be forwarded to five people or groups at a time.”

“Limiting forwarding is an effective way to slow the spread of viral misinformation and harmful content that has the potential to cause real world harm,” argued Jay Sullivan, Facebook’s director of product management, Messenger privacy and safety.

Both Facebook and other tech giants like Twitter have been accused of censorship in the past, due to their attempts at labeling posts deemed “misinformation,” or even banning users.

Already in January 2019, long before numerous new measures had been applied to social media platforms in the context of the coronavirus crisis, L. Brent Bozell III commented, “Facebook is now openly antagonistic toward the right.”

“Posts aren’t just blocked by humans who decide what they do or don’t like; they are blocked by computer programs designed by humans to ensure liberal sensibilities are not offended,” the founder and president of the Media Research Center (MRC) wrote. “The New York Times says the company is monitoring ‘billions of posts per day in over 100 languages.’ That makes what Facebook is doing almost impossible to track, until it’s too late.”

Last month, Bozell and other members of the MRC-led Free Speech Alliance stated, “Facebook has listened to the conservative movement’s complaints and in response has invited us to pound sand. It’s insulting but unsurprising. Unfortunately, this is how Facebook routinely responds to criticism.”

“No conservative leader or organization should accept this as a legitimate response to the undeniable issues we have raised,” the statement continued. “This is purely another superficial attempt by Facebook to placate conservatives with empty promises.”

Among dozens of pro-life and conservative organizations, LifeSiteNews is a member of the Free Speech Alliance as well.

Meanwhile, Parler, the new conservative-friendly alternative to mainstream media platforms, is gaining steam with its stated devotion to true freedom of speech. Readers can find LifeSite on Parler.