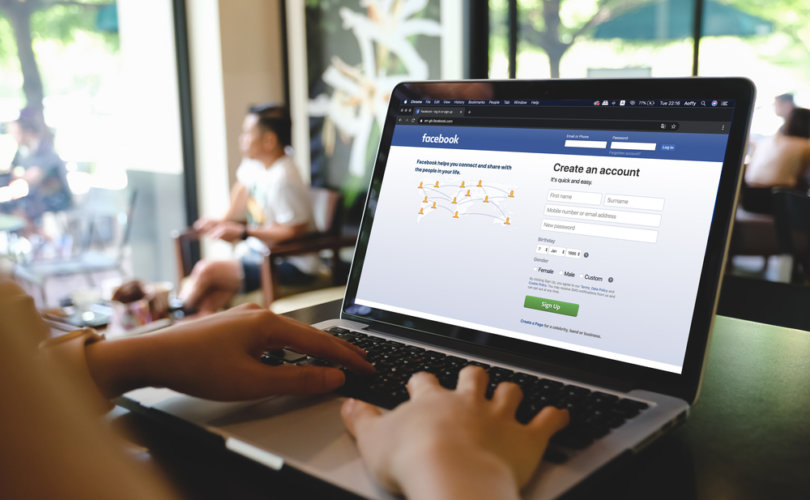 MENLO PARK, California (LifeSiteNews) — Facebook has called for federally standardized rules dictating what people can and cannot say on the internet after an alleged “whistleblower” came forward to accuse the platform of not doing enough to censor “polarizing” voices.

“Whistleblower” Frances Haugen, a former Facebook product manager who worked on the company’s “Civic Integrity” team and was tasked with addressing “civic misinformation,” went public this week to expose Facebook for allegedly prioritizing profits above the “safety” of its users by permitting content she called “angry, hateful, [and] polarizing.”

Haugen’s arguments have come under scrutiny for aligning with a long-standing Democrat agenda to choke conservative content on the internet.

Haugen, a left-wing activist who has donated frequently to Democrat campaigns and is being represented by lawyers who worked to impeach former President Donald Trump, urged Congress to take action to restrict the kinds of content that can and cannot be shared on platforms like Facebook.

Lena Pietsch, Facebook’s director of policy communications, responded to Haugen’s allegations in a statement defending the company but agreeing on the need for government censorship.

According to Pietsch, Haugen “worked for the company for less than two years, had no direct reports, never attended a decision-point meeting with C-level executives — and testified more than six times to not working on the subject matter in question.”

Pietsch argued that Haugen was misinformed in her statements but agreed on the need for a broad government crackdown on what people can and cannot say on the internet.

“Despite all this, we agree on one thing,” Pietsch said, “it’s time to begin to create standard rules for the internet.”

“It’s been 25 years since the rules for the internet have been updated, and instead of expecting the industry to make societal decisions that belong to legislators, it is time for Congress to act,” she said.

Facebook’s statement came after Haugen made a series of claims arguing that the social media giant was endangering the safety of its users by failing to restrict certain content.

On Monday, Haugen appeared on 60 Minutes to slam Facebook for “tearing our societies apart” by not continuing to enforce the “safety systems” that led to the throttling of the factual Hunter Biden story and other conservative content ahead of the 2020 election.

According to Haugen, Facebook has not censored such “misinformation” enough.

Haugen went on to argue that the dissolution of the social media company’s “Civic Integrity” team after Joe Biden was declared president led to the riot at the U.S. Capitol on January 6.

“They told us, ‘We’re dissolving Civic Integrity,’” Haugen said. “Like, they basically said, ‘oh good, we made it through the election. There wasn’t riots. We can get rid of Civic Integrity now.’ Fast forward a couple months, we got the insurrection.”

In August, the FBI stated that it failed to find sufficient evidence the disturbance at the Capitol was part of an organized plot.

After Haugen’s 60 Minutes interview, which received wide-ranging support from legacy media outlets, the former Facebook employee appeared before Congress in a Senate Commerce subcommittee meeting Tuesday to accuse Facebook of endangering democracy by failing to enact more restrictions on speech.

According to Haugen, Facebook has generated its algorithms to maximize profit while “[t]he result has been a system that amplifies division, extremism, and polarization — and undermining societies around the world.”

“In some cases, this dangerous online talk has led to actual violence that harms and even kills people,” she argued.

In her testimony, Haugen made reference to Facebook’s massive outage Monday, which also knocked Instagram, Messenger, Oculus, and WhatsApp offline, arguing the social media platform’s five-hour disappearance made the world safer for “democracies” and young women.

“Yesterday, we saw Facebook get taken off the internet. I don’t know why it went down, but I know that for more than five hours Facebook wasn’t used to deepen divides, destabilize democracies, and make young girls and women feel bad about their bodies,” she said.

Haugen implored Congress to take action against Facebook, comparing its alleged algorithmic promotion of “dangerous” content to tobacco and pharmaceutical companies hiding the risks posed by the substances they sell.

Some have pointed out that Haugen’s arguments align with ongoing efforts of Democrats to control the flow of information and stifle conservative content shared on social media.

“Democrats do not make any secret of their intent to co-opt Silicon Valley power to police political discourse and silence their enemies,” wrote journalist and author Glenn Greenwald.

Greenwald said Democrats have been “[a]gitating for more online censorship” after the 2016 election, when “they blamed social media platforms” for Trump’s victory over Hillary Clinton.

“Haugen is just their latest tool to exploit for their scheme to use the power of social media giants to control political discourse in accordance with their own views and interests,” he argued.

Meanwhile, the public relations firm representing Haugen appears to have close ties with political operatives within the Democrat Party.

As reported by the Daily Wire, the public relations firm backing Haugen, a company called Bryson Gillette, is headed by former Barack Obama aide Bill Burton. Additionally, the lawyers working with Haugen were involved in the move to oust President Trump from office over a phone call he made to the Ukrainian president.

Until September 2020, White House spokesman Jen Psaki had worked for Bryson Gillette as a senior adviser.

Haugen’s connection with the PR firm has led to speculation that her “whistleblowing” is part of a coordinated effort to shut down certain voices on social media.

“Trying to remember the last time a ‘whistleblower’ went public with a PR firm, press email contact, full legal team and Senate appearance,” remarked freelance journalist Drew Holden, who has contributed to such news organizations the The Federalist and Fox.

Greenwald argued that for Democrats, “[t]his craving for censorship has been elevated into an even more urgent priority for their corporate media allies, due to the same belief that Facebook helped elect Trump but also because free speech on social media prevents them from maintaining a stranglehold on the flow of information by allowing ordinary, uncredentialed serfs to challenge, question and dispute their decrees or build a large audience that they cannot control.”

In addition to having interests aligned with those of the Democrat political establishment, the Facebook “whistleblower” also appears to have a history of left-wing political activism and raising issues with employers.

A review conducted by the Daily Wire found that Haugen “has a record of donations to far-left Democrats and a history of raising issues about purported bias while at previous employers.”

While working for Pinterest before coming to Facebook, Haugen spearheaded a move to allow users to filter searches by skin tone.

In 2015 while working for Google, Haugen complained the company wasn’t doing enough to make her feel welcome as a “woman in tech.”

According to Federal Election Commission data cited by the news organization, Haugen has also made more than 20 federal campaign contributions since 2016, exclusively to Democrats including Rep. Alexandria Ocasio-Cortez.

Haugen’s comments and Facebook’s agreement with the need for the government to impose new rules on the internet come after increasing pressure from legacy media outlets and the federal government to throttle online content that questions or opposes the prevailing narratives on issues such as COVID-19 response and treatment, radical sexual ideology, and systemic racism.

This summer, the Biden administration encouraged Americans to notify the government if they believed their loved ones were “radicalizing,” and the FBI called on people to report “suspicious behaviors” connected with political views in friends and family members.

An unclassified report from the Office of National Intelligence published in March named “narratives of fraud in the recent general election, the emboldening impact of the violent breach of the U.S. Capitol,” as well as “perceived government overreach” and “conditions related to the COVID-19 pandemic,” as potential domestic threats.

Meanwhile, a June 22 report published by the research arm of the Global Internet Forum to Counter Terrorism (GIFCT), an international organization created in 2017 by Twitter, YouTube, Microsoft, and Facebook, positioned Trump supporters and “MAGA actors” alongside fringe right-wing militia groups, and identified those opposed to COVID-19 lockdowns and mandatory masking as members of “extremist movements.”