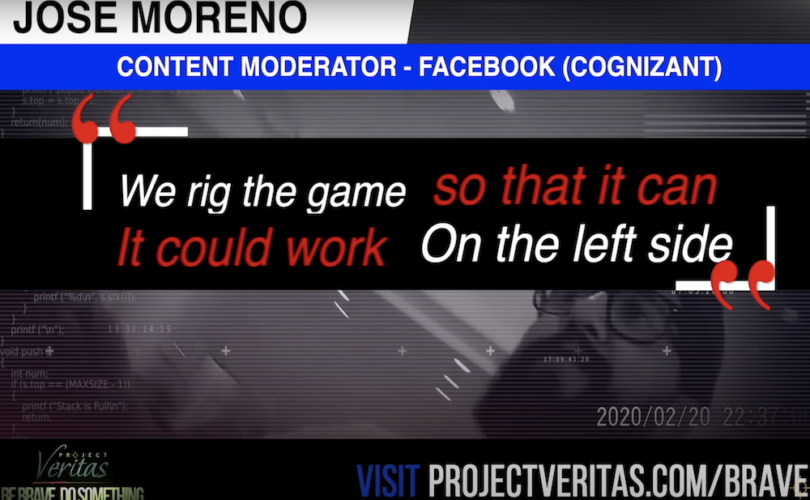 June 26, 2020 (LifeSiteNews) – Facebook aggressively discriminates against conservatives on a global scale for the purpose of influencing election outcomes, according to a whistleblower whose account was highlighted this week by the conservative investigative outlet Project Veritas.

“I was seeing them interfering on a global level in elections. I saw a blatant exception that just targeted conservatives or favored liberals — and you know, we're deleting on average 300 posts or actioning 300 posts a day,” said Ryan Hartwig, who was hired by the third-party outfit Cognizant to moderate content for Facebook. “If you magnify that by however many content moderators there are on a global scale, that's a lot of stuff that's getting taken down.”

The social media giant’s treatment of conservative, Republican, and pro-Trump content “was the tipping point. Knowing what I knew about how they were giving exceptions for the policy, I knew that it was likely that it was happening elsewhere on a global scale,” continued Hartwig, who wore a hidden camera to document what he saw. “Just seeing such blatant bias from Facebook really bothered me.”

“One of my projects before now was hate,” Grimmett said. “I've spent quite a bit of time looking at pictures of hate organizations, Hitler, Nazis, MAGA (Make America Great Again, Trump’s campaign slogan), you know, Proud Boys, all that stuff all day long.”

Another content moderator, Kassi Cimo, can be heard calling for Trump to be handed over to the Iranian government for execution (in response to an $80 million bounty declared by an organizer of the funeral for Iranian terror commander Qasem Soleimani). “It’s inhumane, but if it’s gonna save the country, why not do it?” she asked. “We should just hand him over to them. Take the money, as a country. That’s what I’m saying, if we hand him over, our country would be saved. Just saying.”

By contrast, Hartwig revealed that – as a matter of policy – the moderating section to which he belonged made exceptions for clear-cut examples of hate that aligned with the company’s left-wing values.

For Pride Month, Facebook-Cognizant policy and training manager Shawn Browder informed the team that “we're making the exceptions for our policy to favor the LGBT community.” A slideshow accompanying Browder’s presentation explained that manifestly hateful tweets that would normally be deleted could remain if they are “intended to raise awareness for Pride/LGBTQ,” offering as an example the comment, “Straight white males are filth for not fighting more on behalf of LGBTQ.”

Hartwig’s revelations follow another Project Veritas scoop earlier this week, in which another whistleblower provided footage of more Facebook-Cognizant moderators openly discussing how they would like to delete “every Donald Trump post I see on the timeline” and “delete all Republicans…for terrorism” if they so much as post a photo “wearing a MAGA hat.” Cognizant service delivery manager Demian Gordon can also be seen saying he would not hold staff accountable for taking down Trump posts, on the grounds that they “gotta get the Cheeto (Trump) out of the office.”

These reports are only the latest examples of Facebook’s history of suppressing conservative content under vague or false pretenses. Multiple analyses have found that algorithm changes instituted at the beginning of 2018 disproportionately impacted conservative politicians and websites. Last year, an insider revealed that Facebook “deboosts” traffic to several mainstream conservative sites.

Most recently, Facebook founder and CEO Mark Zuckerberg hinted that the company might change its policies to censor Trump himself, in response to left-wing uproar over the president tweeting that riots and looting could be (though ultimately were not) put down with lethal force.