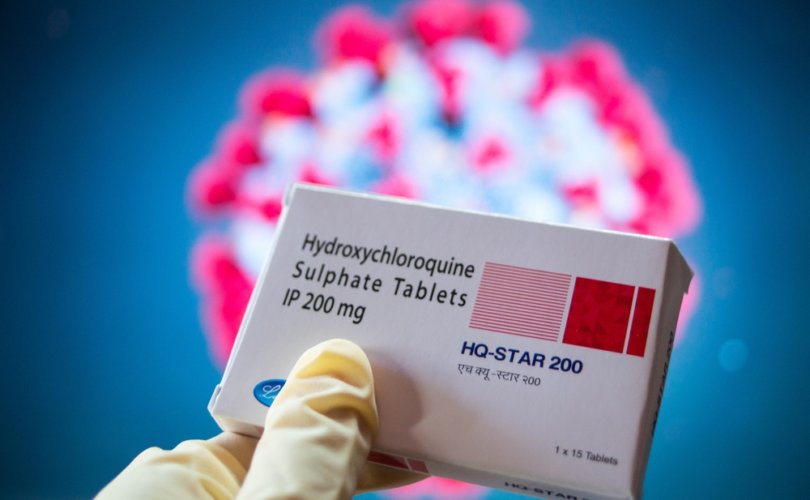 MENLO PARK, California, February 2, 2021 (LifeSiteNews) — Facebook’s new oversight board has overturned the tech giant’s decision to censor a post promoting the use of hydroxychloroquine (HCQ) as a treatment for COVID-19. The social media platform removed the post last year, saying that it caused a “risk of offline harm” due to “misinformation.”

The corporation’s oversight board was created last year to act as a kind of supreme court adjudicating difficult censorship cases. The board’s website states its role is to use “its independent judgment to support people’s right to free expression and ensure those rights are being adequately respected.”

Furthermore, the “board’s decisions to uphold or reverse Facebook’s content decisions,” the description says, “will be binding, meaning Facebook will have to implement them.”

The case in question originated in France in which a Facebook user criticized his government’s refusal “to authorize hydroxychloroquine combined with azithromycin for use against COVID-19.” In doing so, the individual stated, “‘[Didier] Raoult’s cure’ is being used elsewhere to save lives,” and also “questioned what society had to lose by allowing doctors to prescribe in an emergency a ‘harmless drug’ when the first symptoms of COVID-19 appear.”

The post was removed by Facebook for “for violating its misinformation and imminent harm rule… finding the post contributed to the risk of imminent physical harm during a global pandemic.”

In overturning this removal, the Board observed that the focus of the post was an opposition to government policy, and Facebook had not “demonstrated the post would rise to the level of imminent harm, as required by its own rule in the Community Standards,” since HCQ and azithromycin are not available in France apart from a prescription, and the post “does not encourage people to buy or take drugs without a prescription.”

In response to this judgement, Facebook welcomed the Oversight Board’s decision, reinstating the post, and pledging to “initiate a review of identical content with parallel context. If we determine that we have the technical and operational capacity to take action on that content as well, we will do so promptly.”

— Article continues below Petition —
PETITION: Tell the FDA to support medical freedom and Hydroxychloroquine as a possible cure for COVID-19
Show Petition Text
52669 have signed the petition.
Let's get to 55000!
Thank you for signing this petition!
Add your signature:
Show Petition Text

During the COVID-19 pandemic, we have all heard the mantra "listen to the science" repeated over and over.  And most people of good will, regardless of their politics, do trust the expertise of our doctors, scientists, and public health officials.

But what is happening at the FDA with its opposition to an inexpensive, highly effective, safe, and commonly used drug called Hydroxychloroquine (HCQ) has little to do with science and a whole lot to do with Washington DC politics.

Instead of playing politics, the FDA should give HCQ a fair trial and help save lives!

Please SIGN our petition demanding that the FDA stop its politically-motivated anti-scientific opposition to Hydroxychloroquine.

According to a growing number of non-political medical experts, like Dr. Harvey A. Risch, Professor of Epidemiology at Yale University, the FDA's opposition to Hydroxychloroquine as an early treatment for high risk individuals with the coronavirus could be directly responsible for the deaths of many thousands of Americans. Dr. Risch's assertion is backed up by international studies, which he has reviewed openly in prestigious medical journals, and which prove his point beyond a doubt.

Dr. Risch's conclusion about HCQ is also backed up by the growing experience of doctors who are successfully treating their COVID patients with HCQ.  These are not quack doctors like the mainstream media would have you believe, but compassionate and courageous licensed medical doctors, willing to go against the political prejudice of the mainstream for the good of their patients.

When properly prescribed (in the right dose and to the right individuals), the science proves that HCQ can lead to a drastic reduction in mortality, so why would the FDA want to stop a cheap, safe and effective treatment for the coronavirus?

It is not conspiratorial to suspect that companies that stand to make tens of billions of dollars in profits from the sale of vaccines would want to bury a cheap, safe, and widely available treatment for the virus.

According to OpenSecrets.org, pharmaceutical companies spent over a billion dollars in lobbying activities since President Trump's election.  More importantly, 63% of lobbyists employed by the pharmaceutical companies previously worked in the government.  This does not automatically mean that they would use their significant influence to undermine competitors, but it certainly highlights the need for the people to be vigilant when it comes to government decisions which could impact the pharmaceutical industry.

In the end, it does not matter if the motivation behind the FDA's opposition to Hydroxychloroquine is based on politics, the influence of pharmaceuticals or just bad science. What matters is that Americans and people around the world are dying unnecessarily and we are still in time to correct this terrible decision.

As was seen by the grotesque censorship of the Frontline Doctors White Coat Summit last week. Big Tech companies have swallowed the political lie, hook, line, and sinker, and are now in a full-blown virtue signaling campaign of censorship against HCQ.

Please sign our petition right now. It will be delivered to the FDA and President Trump at the White House. We do not have time to lose.

The Key to Defeating COVID-19 Already Exists. We Need to Start Using It -
https://www.newsweek.com/key-defeating-covid-19-already-exists-we-need-start-using-it-opinion-1519535

Early Outpatient Treatment of Symptomatic, High-Risk Covid-19 Patients that Should be Ramped-Up Immediately as Key to the Pandemic Crisis -
https://academic.oup.com/aje/article/doi/10.1093/aje/kwaa093/5847586

This Indian slum contained a possible COVID-19 disaster with hydroxychloroquine -

The Oversight Board’s judgment comes in the midst of a new study published in the American Journal of Medicine (AJM) which confirmed positive results for early treatments of COVID-19 using HCQ, and supported early outpatient treatment with this medication.

In a recent white paper dealing with these topics, a group called America’s Frontline Doctors (AFLD) describes HCQ as “one of the safest medications in the world, safer than Motrin or Tylenol.”

As described by its founder, Dr. Simone Gold, AFLD is a volunteer physician’s organization which was assembled to “combat the serious and life-threatening disinformation campaign” that came in the wake of the COVID-19 crisis.

Last July, the group held a press conference in which they discussed the effectiveness of HCQ to treat COVID-19, and after this video had gone viral, being viewed 17 million times in 8 hours, big tech corporations, including Facebook swiftly removed it for violating their “misinformation” policies.

In their paper, the group calls the suppression of the truth that HCQ is a safe, effective, widely available and inexpensive treatment for COVID-19, the “most notable” disinformation regarding the pandemic.

In fact, outside the Western nations, HCQ has been broadly used with great success. For example, in response to the virus, both China and India mandated or recommended HCQ for its population early last year, and at least India, “continues to enjoy a death rate a fraction (~10 percent) of the USA even in the most densely populated slums,” the group writes.

Dr. Gold stated in a presentation last month, “So in America the death rates are in the 800 range per million,” she explained. “In Africa, Sub-Sahara Africa, the poorest places in the world, no social distancing, no mask, no ICU’s, they have a death rate of one percent the western nations. One percent!”

“Now I believe it is due to widely available HCQ. I don’t think you can explain it for any other reason,” she said.

The AFLD paper goes on to provide thorough documentation on how “(c)ountries where HCQ is widely available, which are typically third world countries that have malaria or citizens who travel to malaria-endemic regions, have 1-10 percent of the death rates of first world nations where HCQ is severely restricted.”

Commenting on the irony of Facebook’s censorship of this topic, Dr. Gold tweeted: “Facebook just announced it ‘made a mistake’ when it censored studies showing HCQ saves lives. Censorship is never ‘a mistake.’ Tech executives repeatedly made a calculated decision, month after month, silencing physicians worldwide. Censorship kills.”

Facebook just announced it “made a mistake” when it censored studies showing HCQ saves lives. Censorship is never “a mistake.” Tech executives repeatedly made a calculated decision, month after month, silencing physicians worldwide.

One commenter asked, “how many people died because of their actions! If this isn’t enough I don’t know what is to sanction these social media creeps.”

Another responded, “Exactly doctor Gold… they (Facebook) knew what they were doing and should be held accountable… lives were involved here and the heads of these corporations positioned themselves against the safety of the people.”

HCQ, McCullough says, really works and is “the most widely used therapeutic” to treat COVID-19 in the world.

“The chances that it doesn’t work are calculated to be one in 17 billion,” he said.

“Sadly, in the United States … patients get no treatment whatsoever. They literally are told to stay at home until they are sick enough to go to the hospital.”

“I think that honestly it’s atrocious. History will look back on that and think it was the worst way to handle a potentially fatal illness.”