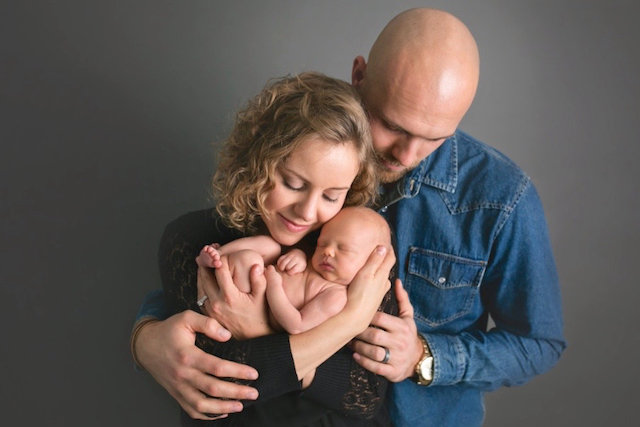 Jon and Katelyn Edwards with their newborn son Benjamin

Jan. 4 2016 (Bound4Life) — It’s been a year like no other for Major League pitcher Jon Edwards and his wife Katelyn. Last December, a doctor’s report shook their world: Jon was diagnosed with testicular cancer and needed immediate surgery.

Bucking against some recommendations, the Edwards opted to forego the future possibility of in vitro fertilization. Jon said to the medical specialist, “Sir, with all due respect, Abraham had children in his 90’s. We are just going to trust the Lord with this. We believe God wants good for us and we’ll have babies when that time comes.”

Edwards went into surgery only days before Christmas. The report the next day astounded his doctors. “The CAT scan came back clean: my lymph nodes, torso, everything completely cancer-free,” recounts Edwards.

Cleared to pitch for the Texas Rangers, Jon and Katelyn Edwards went on to spring training in the city of Surprise, Arizona. “There we were and it was Surprise, you’re pregnant!” recalls Katelyn, a development the media proclaimed a miracle. Then in August, an unforeseen trade uprooted them to California.

One year after the very day they received his initial cancer diagnosis, Jon and Katelyn Edwards speak in an exclusive Bound4LIFE interview from their extended family’s home in north Texas—sharing the joys and difficulties they faced together this past year.

Bound4LIFE: Last we spoke, Jon, you were pitching for the Texas Rangers. What changed this past summer?

Jon Edwards: In August, we were traded to the San Diego Padres. It was unexpected, but I knew God was moving us—closing one door, to open another door that would be better.

I’m excited about all the changes that we’re having in our organization: new managers, players—I’m looking forward to the opportunity we have to be there and to glorify the Lord.

Bound4LIFE: Katelyn, how has this trade affected you—moving to San Diego in the midst of preparing for a new baby?

Katelyn Edwards: We were traded just two months before our baby was born. We were excited about it, but the transition was harder for me being eight months pregnant. Moving from Dallas to San Diego, we were living out of suitcases and in hotels—while I had been looking forward to being at home, nesting and preparing.

In an uncomfortable and difficult situation, all I could do was rely on the Lord for strength. God not only helped me through it; He carried me on eagles’ wings. I learned to stop trying to control it all, instead placing my trust in His hands.

Looking back on it now, I see how the details of Jon being traded, us finding a place to live out there, getting all the details prepared for our baby to arrive—throughout the transition, the Lord was definitely taking care of all those little details.

Bound4LIFE: When your family came into San Diego, Jon, one local reporter recounted how you beat cancer in a story where your faith really shines through. Have you had many opportunities to share the journey you’ve traveled?

Jon Edwards: I definitely have, which is what’s been so cool about being traded over to San Diego. When I first got there, I found out that the number one cause of death in the San Diego area is cancer.

They were having a charity event to raise money to fight against cancer, and I had the opportunity to share the faithfulness of Jesus in my life. I told the audience how I’ve seen Him be a healer and how He loves each of us; He was faithful to heal me, to take care of me going through what I did.

So I have had opportunities in San Diego, and in many other places the Lord has been opening doors for me to share my testimony. We’ve been really encouraged.

Bound4LIFE: Katelyn, many have now heard the miracle story leading up to your pregnancy. Tell us about those months anticipating your new son and welcoming him into the world.

Katelyn Edwards: Going through pregnancy and birth, it’s given me a whole new perspective on life. There is no doubt that each life is an absolute miracle and a gift from the Lord—He’s the master Creator, and His hand is on every detail, forming the life on the inside of you. The way that He designed it is so perfect, there’s nothing we can add to it.

My pregnancy went very smoothly. But no matter if someone has an easy pregnancy or a more challenging one, you can always be at rest knowing that He’s protecting you and your baby—keeping you from harm.

Our Benjamin was born on October 24. There is nothing like after that incredible moment of birth, getting to hold a new baby in your arms. I experienced a whole new love that I can’t even describe.

Bound4LIFE: What is the significance of your son’s name?

Katelyn Edwards: Benjamin means “son of my right hand” and “grace.” His middle name David means “beloved.” These are two truths we desire Benjamin to grow up knowing—he is a beloved child of the Most High, and he has the grace of God on the inside of him.

Jon Edwards: Early on, when we first found out that Katelyn was pregnant, I felt the Lord speak to my heart that it was a boy. I had the strong sense that Benjamin will be called to minister to people; I don’t know what shape or form that will take.

I feel he’s going to have a big impact. Our pastor often talks about “the Benjamin generation” being a company of young people who live out the grace of Jesus Christ in our day; I believe our son is going to be a big part of that.

Bound4LIFE: Jon, both Major League teams you’ve pitched for have faced a lot of upheaval, with the Padres having named a new manager post-season. How do you handle transition—in your own life, and in the clubhouse with teammates?

Jon Edwards: This year, the Lord taught me a lot about being where my feet are at—taking it one day at a time, and not getting ahead of Him trying to make plans of my own. Trusting Him with each day is how I handle changes. Even when we were traded mid-season and moved across the country, we could rest in that.

Part of being a leader is walking it out with my teammates, verbally sharing that encouragement. When people ask, What’s different about that guy? then you get opportunities to share, “I trust in the Lord, I know He is faithful and He is for us.”

We have a brand new manager in San Diego who I’m extremely excited about. I just had my first phone conversation with him; most of it we spent talking about God, which is an incredible thing to me.

God is doing awesome stuff, allowing me to play for a solid Christian leader who loves the Lord, loves playing the game of baseball and wants to glorify our Creator. When we rest in the Lord and put it in His hands, He brings it all together.

Bound4LIFE: As now a family of three, does the Christmas season feel any different?

Jon Edwards: With our son Benjamin, we experience a love we’ve never experienced before; every time I see him, it makes my face light up.

The other day we were sharing how, because of those strong bonds, it’s easy for the enemy to have a heyday with parents—bringing us to a place of worry or fear about our children. I remember the Lord telling me clearly: Jesus was the only baby born to die. It speaks of His protection over Benjamin, and over every child.

Katelyn Edwards: We can trust the Lord with our kids: that He’s protecting them, He is for them, they are filled with His life—with health and peace, because of His birth.

We have a whole new perspective on the very gift of what Christmas is, the gift of how Jesus came to die for us and give us new life. To see how our Heavenly Father would give up His only Son for us… what an incredible gift that is.

After 10 years on staff at The Heritage Foundation and Focus on the Family, Josh M. Shepherd currently serves in communications at Bound4LIFE International – a grassroots movement to pray for the ending of abortion and for revival worldwide. He earned a degree in Business Marketing from the University of Colorado. He and his wife Terri live in the Washington, DC area.