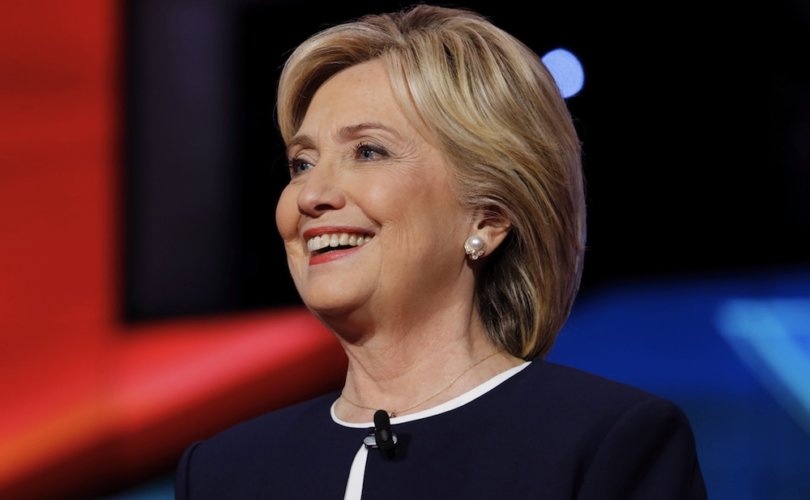 It has become common for “fact-checking” groups to arbitrate what is true and what is false. But the “fact-checkers” themselves are often biased and do not always present the truth.

The self-described “non-partisan” outlets echo Planned Parenthood President Cecile Richards, who, in the Spin Room immediately after the debate, also claimed Trump was wrong and told Elite Daily, “(Trump's) ignorance of these issues is profound.”

What Trump actually said in the final debate was that, under Clinton’s abortion policy, “in the ninth month you can take the baby and rip the baby out of the womb of the mother just prior to the birth of the baby … and that’s not acceptable.”

Clinton responded by characterizing Trump's remark as a “kind of scare rhetoric.”

But the fact is, abortion until the moment of birth is legal in the United States. Perfectly healthy babies at seven, eight, and nine month’s gestation are aborted every day.

Roe v. Wade was accompanied by a simultaneous joint decision, Doe v. Bolton, which the U.S. Supreme Court said must be enforced together. In Roe, the court ruled that unrestricted abortion-on-demand is legal up to “viability,” and after viability in cases of rape, incest, or the “health” of the mother. In Doe, the court ruled that the mother's “health” must be defined so broadly as to include mental state and disposition.

The nation's highest court ruled that as far as legally obtaining a late-term abortion, “health” must encompass “physical, emotional, psychological, familial … well-being.”  This is what allows any abortionist to legally kill any baby right up to her due date.

Some abortionists sign off on girls getting late-term abortions for “mental health reasons.”

While for the record, seven states have no age restriction on abortion, the remaining 43 states have exceptions that can and are being used by abortionists to legally justify abortion at any gestation throughout the nine months of pregnancy.

The federal government admits this. At its peak year, 30,000 late-term abortions occurred in the U.S., the Center for Disease Control reported. More recently, the CDC reported 1.3 percent of annual abortions — 13,000 viable babies — were late term.

Trump is, tragically, right: Abortion is legal in the U.S. right up until the moment of birth.

As for Clinton's support of unrestricted abortion, that is a matter of record. She has repeatedly stated her unequivocal support for Roe and abortion “rights.” She has said preborn babies do not have the right to life. On NBC's Meet the Press, she declared that “the unborn, ah, person, ah, doesn't have Constitutional rights.” Later on in the interview, Clinton inadvertently admitted that the pregnant woman is, in fact, “a mother who is carrying a child.”

Clinton's Democratic platform is blatantly pro-abortion, not only opposing any restrictions on abortion but supporting taxpayer-funded abortion both nationally and worldwide. She seeks to repeal the Hyde Amendment, which disallows government funding of abortion.

Clinton's record as a New York senator also reveals her extreme pro-abortion position.  She argued passionately against banning the gruesome partial-birth abortion infanticide procedure, and she voted against the ban. While First Lady, her husband explained his refusal to sign the partial-birth abortion ban by saying, “Hillary and I prayed about it, and it's the right thing to do.”

In 2003 on the senate floor, Clinton described the partial-birth abortion ban as “extreme, deceptive, and unconstitutional.” She then turned the focus of her remarks to women who are given a terminal diagnosis for their baby, falsely implying that late-term abortions are only for this reason, and concluding, “I believe that forcing a woman to carry a child whom she knows will die is an assault, not only on her health — her mental health — but on our values as a nation and a free people.”

Here's a fact-check for Clinton: Her claim that partial birth abortion — or any late-term abortion — is used only in cases of detrimental health on the part of the mother or the baby is not true.

Ron Fitzsimmons, while head of the National Coalition of Abortion Providers, admitted that the vast majority of partial birth abortions — done well after viability — were performed on healthy babies. He told “Nightline” in 1997, “The law allows that.”  Fitzsimmons also admitted that he “lied through my teeth” when he previously testified that partial birth abortion was used rarely and only on women whose lives were in danger or whose babies were damaged.

Dr. Elizabeth Johnson of the Charlotte Lozier Institute noted, “For many years, abortion-rights advocates have asserted that abortions after 20 weeks are performed because of maternal health complications or lethal fetal anomalies discovered late in pregnancy.  However, wider data from both the medical literature and late-term abortion providers indicates that most late-term procedures are not performed for these reasons.”

Former abortionist Dr. Anthony Levatino and a consensus of more than 1,000 OB/GYNs, neonatologists, and other health experts agree that with modern medicine, abortion is never medically necessary to save the life of the mother.

Dr. Levatino, an OB/GYN who performed more than 1,200 abortions before repenting, describes a late-term abortion:

The “bottom line” is, unfortunately for more than 60 million babies killed since 1973, abortion is legal up to the very moment of birth, and Clinton and her Democratic platform support it while Trump and the GOP platform support life.

“One death is one too many,” Cecelia Cody, administrative director for California Right to Life, told LifeSiteNews. She then added, “If we use heartbeat to determine death, shouldn't we use it to determine life? A baby's heartbeat begins at 16 days.”