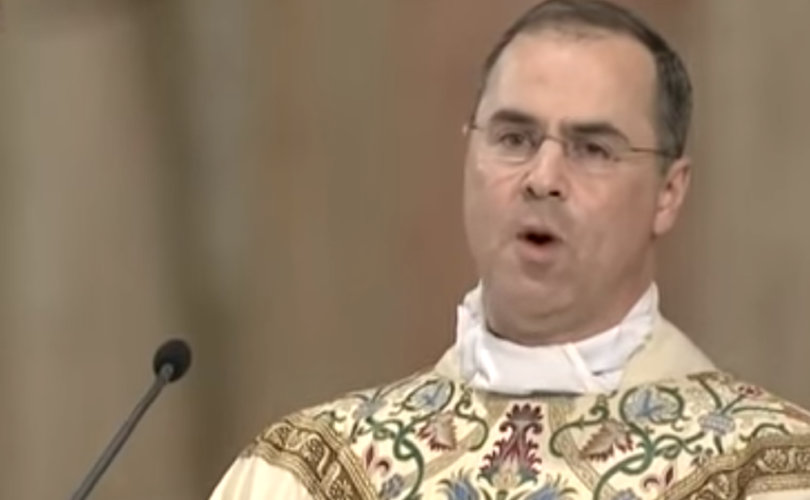 ARLINGTON, Virginia, May 4, 2017 (LifeSiteNews) – The death of Supreme Court Justice Antonin Scalia last year gave his children a new appreciation for the family’s Catholic faith and drew the siblings closer.

Father Paul Scalia, one of the late justice’s nine children, spoke in an interview this week about faith, family, religious freedom and the inaccuracy at times of the “conservative” label. The Catholic priest also explained the essential nature of the Church’s tradition.

Father Scalia, who had a book published recently, writes columns for various publications and speaks often on faith and doctrine. Asked if since his father’s passing people look to him to say more, perhaps address bigger topics, his succinct response illustrated his regard for the faith.

“Faith is a big enough topic,” he said.

The Washingtonian asked Father Scalia about the funeral homily he offered for his father last February before thousands at the Basilica of the National Shrine of the Immaculate Conception in Washington, D.C., that received praise and media attention. In it, he mentioned faith in the public square and that it is not disconnected from public life.

“If we speak about faith, we have to talk about the public living of it,” said Father Scalia. “It can never be a private matter. It always has to be lived out in the public square.”

“The role of the Church is to inform the conscience, not to draft legislation,” he continued. “But we have a right to live out our faith publicly. It can’t be confined to the Church or school — thus far, no further. That doesn’t comport with our human freedom.”

As a priest of the northern Virginia Diocese of Arlington, the Washingtonian asked Father Scalia about the Arlington diocese’s reputation of being “rather conservative.”

He explained how the Catholic Church is not subject to political definitions.

“I don’t like the term conservative,” he said. “That’s a political category.”

Father Scalia then clarified that there is an embrace in the diocese of the Church’s tradition, but even this is beyond definition.

An essential part of the Deposit of Faith

“I guess you could say traditional,” he said, “but then every Catholic is traditional, or ought to be, because we have to be rooted in the tradition of the Church.”

“So I don’t like those categories,” the priest continued, “because it sounds like tradition is an option.”

And it feeds into stereotypes, Father Scalia explained.

His father was often referred to as conservative, because of his regard for the rule of law and approach to the Constitution.

A great deal has been made after his dad’s death about balance on the Supreme Court and its implications for the U.S. It continues today after the confirmation of Justice Neil Gorsuch. Father Scalia thinks his father would say the immense role the Supreme Court has come to play in public life is a distortion of its purpose.

He was still Dad

Father Scalia was 15 when Judge Scalia was appointed to the High Court. Even after his name became better known, for the kids it wasn’t a big deal, said Father Scalia, “He was Dad, and the lawn better be mowed and you’d better not be late for dinner.”

There was an outpouring of prayers from Catholics and people of other faiths from across the world when his father died “because they knew him to be a man of faith, and not necessarily their own faith,” said Father Scalia.

This illustrated for him the impact of how the late justice lived his faith.

“You take it for granted growing up — that’s Dad, and we go to Mass because that’s what we do — but his faith had an impact that I had not perceived,” said Father Scalia. “It makes me value more deeply the things he communicated.”

He and his siblings were never more grateful for each other than in the time after his death. They were there for each, he said, “with a sense of that faith.”

Father Scalia downplayed whether he might be looked to as a voice on the Catholic faith or how it relates to social and political issues.

“That may step into the national conversation, but that’s only in pursuit of the care of souls,” he said. “That’s not an end in itself. There are plenty of people who do that, and it’s fine, but as a priest my concern is not to be a cultural commentator or an observer of the national scene.”

Father Scalia’s book That Nothing May Be Lost — Reflections on Catholic Doctrine and Devotion is available through Ignatius Press.