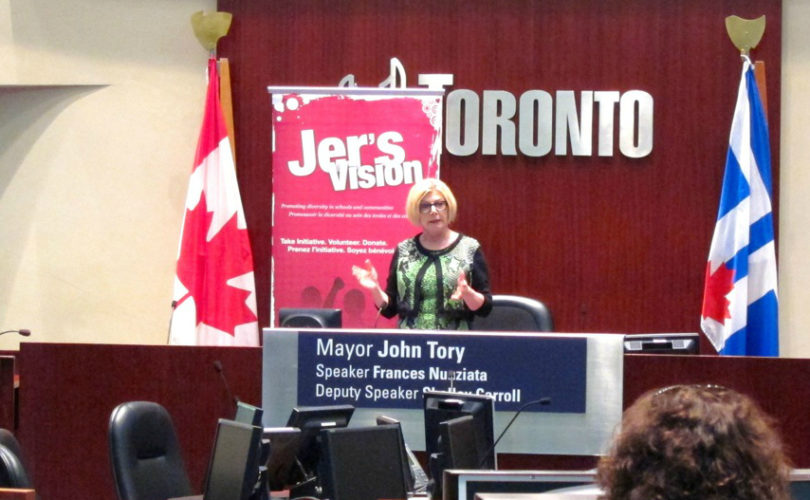 DiNovo, a New Democratic member of the Ontario legislature and an ordained United Church of Canada minister, has sponsored several pro-LGBTQ bills, including one likely to pass this term that would ban psychotherapy for teenagers who want help coping with same-sex attractions.

However, Peter Sprigg, of the Family Research Council in Washington, D.C., said there is an abundance of evidence that sexual orientation can change—especially in teenagers. “Ritch Savin-Williams, the leading researcher on homosexual teens in the U.S., has said that the large Adolescent Health Survey shows changes in sexual orientation among teens are not only possible, but common,” according to Sprigg.

Moreover, Christians who object to gay straight alliances in public schools or providing transgendered people access to the facilities, including bathrooms, of their choice have “nothing to do with faith, and everything to do with phobia,” DiNovo said.

But while examples of bathroom attacks by rapists in drag are indeed few and far between, there is no shortage of published instances of children and adults uncomfortable at “bathroom laws” that require they share washrooms with other-gendered.

During debate over Arizona’s bathroom bill in 2014, for example, LifeSiteNews quoted a Tuscon, Arizona mother, Susan Wright, describing how her son, “won’t let me go into the bathroom with him. He won’t let a woman teacher go in with him.”

Another parent, Sharah Gray, is quoted by LifeSiteNews as saying, “it’s a privacy issue.” Hatred has nothing to do with it. She wouldn’t want to share the bathroom with her uncle or male cousin, and didn’t hate either relative.

DiNovo had no time for such considerations, citing instead her opponents’ “crazy talk” about rapists in drag. The claims such self-described “people of faith” made of how “they loved children and put them at the centre of their theology,” were just as bogus, she said. “Clearly they didn’t love some children,” that is, children with transgendered inclinations who were uncomfortable or fearful in the washrooms appropriate to their biological gender.

DiNovo dismissed as “urban myths” the claims about bathroom assaults by trans people. “To my knowledge there has never been a case of this ever happening—hear my words –ever happening.” But on the other hand there were plenty of documented cases of transgendered people being assaulted in washrooms by members of their same biological gender, she said.

Taking the same tack as Premier Kathleen Wynne does when defending her controversial sex education curriculum against parental criticism, DiNovo characterized all opposition to the expansion of  LGBTQ rights and privileges as motivated by emotions and not reason.

“There is nothing in the Torah, in the Koran, nothing in the Bible, absolutely nothing… that should be or could be construed as hateful of LGBTQ people,” she said. “And anyone who is a person of faith, who claims that is not the case, is absolutely and categorically wrong.”

FRC’s Sprigg, an ordained Baptist minister as well as a public policy analyst, agreed—to a point. “There is nothing in the Bible that can be construed as ‘hateful’ toward any group of people. However, the Bible makes clear that human beings are created male and female, and that sexual relations with someone of the same sex are contrary the will of God. The evaluation of certain chosen behaviors as being sinful has nothing to do with ‘hate’ toward a person or group of people. On the contrary, it is love which motivates us to want to spare people the negative consequences—physical as well as spiritual—which accompany sin.”

For DiNovo, hatred is the only explanation for opposing expanding access to gender-specific facilities to transgendered people. DiNovo described how “really unnerving” it was to sit as a legislative committee member and listen to “people who said they were people of faith” testify against the 2012 Accepting Schools bill, “come and sit in front of that committee every day and preach hate…What faith provides is a kind of cover for hatred.”

By focusing on hate, DiNovo could ignore the natural law theology that the Catholic Church’s opposition to homosexuality and transgenderism is actually based on. This teaches that God’s sexual intentions for human sexuality lie in the complementarity of men and women, as clearly manifested in the biology of human reproduction.

As Sprigg has written: “To suggest that the identification of a human being's sex at birth represents merely an ‘assignment,’ as though it were entirely a social construct agreed upon by the child's parents and physician, is absurd. Sex is an objective biological reality, identified based on the presence of external genitalia, internal sex organs, and chromosomes, which in the overwhelming majority of cases are entirely consistent and unambiguous at birth.”