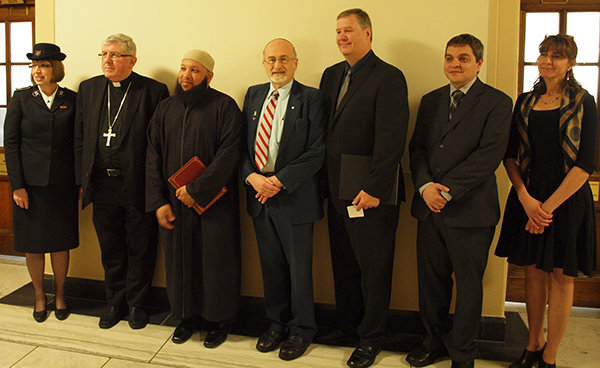 OTTAWA, April 21, 2016 (LifeSiteNews) — The Liberal government’s euthanasia and assisted suicide bill must include explicit protection for the conscience rights of both individual healthcare workers and healthcare institutions, a group of religious leaders warned at an Ottawa press conference Tuesday.

At the same time, they stated they completely oppose the legalization of euthanasia and assisted suicide in Canada as “morally and ethically wrong,” in the words of Bruce Clemenger, president of the Evangelical Fellowship of Canada.

Catholic Cardinal Thomas Collins of Toronto, Imam Sikander Hashmi of the Canadian Council of Imams, Commissioner Susan McMillan, Territorial Commander for the Salvation Army in Canada and Bermuda, and Rabbi Dr. Reuven Bulka of the Congregation Machzikei Hadas in Ottawa joined Clemenger at the conference.

“From the beginning of this year, along with hundreds of my colleagues, I have felt a threat of possible reprisals if eventually I should not participate in the killing of my patients who might ask for it,” said Girouard, who practises at Hospital du Sacre-Coeur.

“To my knowledge, nowhere else in the world are doctors forced by law to kill their patients or to arrange to have them killed,” she added.

The multi-faith press conference was held in the wake of the Liberals’ April 14 tabling of a draft bill on euthanasia and assisted suicide.

If passed, Bill C-14 will replace the current laws which were struck down by the Supreme Court’s February 2015 Carter decision as unconstitutional. That ruling takes effect June 6.

Before the Liberals drafted Bill C-14, a Liberal-heavy special joint parliamentary committee, tasked with providing a framework for new legislation, tabled a report in February that recommended a wide-open euthanasia regime.

The committee’s recommendations included compelling doctors who object to euthanasia and assisted suicide to provide “effective” referrals (that is, to a willing doctor), and forcing all publicly funded healthcare institutions to kill patients by medical means.

But in the draft legislation, as Catholic Cardinal Thomas Collins of Toronto pointed out Tuesday: “We see no reference to conscience rights.”

“We ask, simply, for the same protection that has been provided to these facilities in every foreign jurisdiction in the world that has legalized euthanasia [and] assisted suicide,” Collins said. “That is, never to force hospitals, nursing homes, hospices and other care facilities to go against their mission and values, which are their institutional conscience.”

As for individual medical professionals, “To ask, even demand of doctors that they terminate life, or be in any way complicit in terminating life, is to turn the world of medical practice upside down,” noted Rabbi Bulka.

It is “unacceptable” to force a doctor to “actively terminate a life” and also to “force a physician to refer a patient for that purpose,” he said. “This effectively forces a physician to be complicit in murder, and is certainly a breach of human rights.”

Moreover, “such principled objection” by a “physician, nurse, pharmacist, or any other social or healthcare professional” must not lead to any form of  discrimination against the individual, he said.

“Whatever protocols are adopted in the wake of the impending legislation must build in rock solid protections to prevent this from happening,” contended Bulka.

“What I ask of the federal government is that a clause should guarantee the freedom of conscience of each healthcare professional across the country,” said Girouard, an assistant clinical professor at the University of Montreal.

“Do not leave this question up to the provinces; we  already know what is in store at that level of government,” she said.

One of her colleagues was “publicly threatened by Quebec’s minister of health with disciplinary action if he did not submit to the obligation to participate in euthanasia..in his own hospital in Montreal.”

Health minister Gaetan Barrette made this threat in September 2015, as LifeSiteNews reported. Quebec’s euthanasia Bill 52 took effect December 10 of that year, and there have as yet been no reports of Barrette making good his threat.

Staff at Quebec’s 29 publicly funded hospices had stated about that time that they would not euthanize their patients.

Since then, “a number of doctors have affirmed that they will leave the practice of medicine if they lose their freedom of conscience and have to take part in homicide against their will,” Girouard said.

Meanwhile, the College of Physicians and Surgeons of Ontario ratified a policy in January 2016 that requires an objecting physician to provide an “effective” referral.

The Salvation Army’s McMillan emphasized the need for better palliative care in Canada, noting that only 30 percent of Canadians have access to such care, while Iman Hashmi pointed out that “people suffering from a terminal illness, physical disability, psychiatric illness, or are otherwise isolated or lonely, deserve to be embraced and welcomed as cherished members of society.”

“Once voluntarily choosing death over life becomes acceptable, it will be virtually impossible to protect the vulnerable against indirect encouragement and promotion of this act,” Hashmi warned.

EFC’s Clemenger said Parliament is “better suited” than the Supreme Court “to say what’s the acceptable level of risk we will place vulnerable people at to accede to other people’s claim, through personal autonomy, to assisted death.”

“Canada stands at a threshold,” he said, and he urged parliamentarians especially to consider the implications of crossing that threshold.

The diverse faith communities, added Clemenger, are “determined to work to alleviate human suffering in every form, but never by intentionally eliminating those who suffer.”