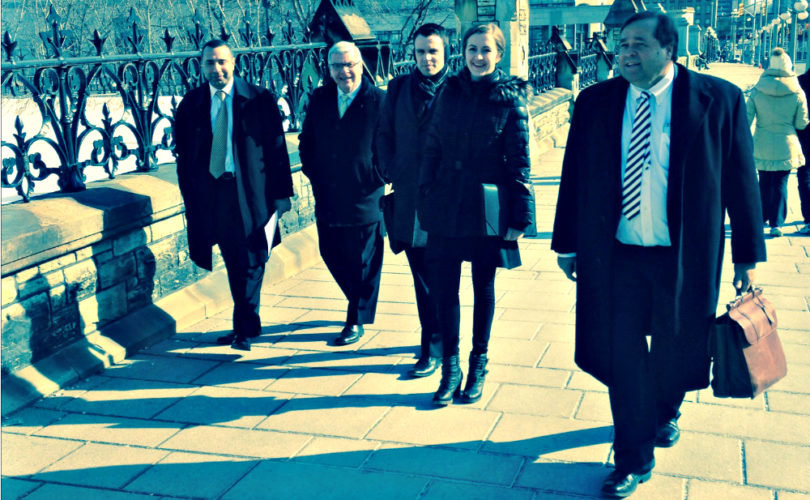 A group of faith leaders walk together in Ottawa on March 25, 2015, prior to a press conference warning of increasing persecution against Christians in Canada.

OTTAWA, March 26, 2015 (LifeSiteNews.com) – A group of Christian leaders chose Parliament Hill to warn that religious freedom in Canada is under deadly attack, but their target audience was as much ordinary believers as it was the government of Canada.

“We believe it is the government’s duty to protect our religious rights under the Charter,” evangelist Bill Prankard told LifeSiteNews. “But it is also the duty of every Christian to speak up in defence of our values and rights. Too many have been silent and complacent. In the words of our beloved Dietrich Bonhoeffer, ‘to not speak is to speak; to not act is to act.’”

While only five leaders crowded into the tiny Charles Lynch press theatre on Parliament Hill, organizer Faytene Grasseschi of My Canada told LifeSiteNews that several dozen leaders, mostly Evangelical Christians, are behind the group’s visit to Parliament. Along with Prankard, an Ontario evangelist who says he spends his life “urging Canadians to wake up,” there were Andre Schutten, legal counsel for the Association of Reformed Political Action, Majed El Shafie, founder of One Free World International, Charles McVety, the firebrand president of Toronto’s Canada Christian College, and Lia Milousis of My Canada.

Asked about the origins of the ad hoc group, which met with Minister of Multiculturalism Tim Uppal and pro-life MP Mark Warawa, Grasseschi said, “We were catalyzed by the persecution of Trinity Western University by the Bank of Montreal and the law societies.”

(BMO successfully urged the Law Society of Upper Canada to reject applicants to the Ontario bar from TWU’s proposed law school, as part of a general campaign to encourage business partners to hire homosexuals.)

Grasseschi also cited the Ontario College of Physicians and Surgeons’ decision to force members to refer patients wanting abortions to doctors who would do them, or to do them themselves when medically necessary. At the news conference, her colleague at My Canada, Lia Milousis, also referred to the persecution of Christians and pro-lifers at universities and even in high school.

“I myself have been a victim of bullying in my high school because of my Christian faith and have sat in classes where it is mocked at university,” Milousis said. “This type of persecution is wrong and alarming. If this creeping barrage continues Canada will become a nation far removed from the values that have made it great.”

Majed El Shafie, who escaped religious persecution in his native Egypt on jet skis and now runs an organization dedicated to religious freedom worldwide, also spoke of the Ontario school system’s new sex education curriculum as one of many examples of Christians having beliefs they oppose being forced on them. “Within our schools, within our churches even, we are being told what to think and what to say.”

But El Shafie told LifeSiteNews, “I don’t blame the people who are doing this. I blame the Christians who are silent about it. In the absence of light, the darkness rules.” El Shafie urged all Christians to lobby their federal MPs and their provincial legislators. “Send letters to the secular media. If you remain silent, it lets them believe they can do whatever they want.”

El Shafie identified the source of the war on religious freedom as “political correctness,” which he said was “a cancer in our Canadian fabric” eating away at traditional values of tolerance and freedom.

But Schutten went further, describing the persecution as coming from “a radical religious secularism.” He told LifeSiteNews that most Canadians don’t realize this “new religion” is running things, “and even a lot of so-called Christians don’t realize they are actually living their lives in this world view.”

Grasseschi said the group was being deliberately vague about what the government should do about the problem but noted, “It cares enough about the issue in other countries to create the Office of Religious Freedom. Certainly many Members have expressed their concern about Trinity Western University.”

“It is not so bad now compared to other parts of the world,” El Shafie said. “But over the next 10 or 20 years, it will affect us all, step by step, little by little, unless we do something.”