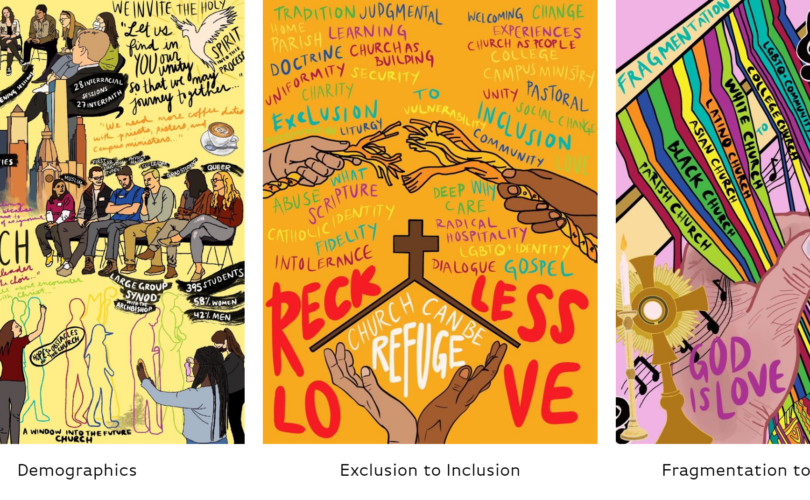 (LifeSiteNews) – A conservative Catholic accused an artist who used him and his friends as models for Vatican Synod on Synodality artwork of labeling the youth with “false identities,” such as “Muslim” and “queer,” to “fit a skewed agenda.”

Becky McIntyre, whose controversial artwork for the synod has been featured by the Vatican’s official Secretariat for the Synod Twitter account, created several illustrations that accompany a synod summary report written for the Archdiocese of Philadelphia. One of the report’s artworks by McIntyre illustrates the “Demographics” of the diocese’s synod participants, as McIntyre’s website indicates.

According to the summary document report, there were indeed three Muslim participants in the diocese’s listening sessions, and it appears to suggest one or more LGBTQ-identified students participated, stating “students desire healing, especially women, LBGTQ,” and others.”

However, part of the controversy surrounding this infographic stems from the fact that, as a photograph shared to “The Basic Catholic” Instagram account shows, real participants in one listening session were clearly used as models for McIntyre’s illustration.

One of those models —the young man holding a microphone — reached out to Austin Quick, who runs “The Basic Catholic” account, to express concern that the artwork misrepresented the young Catholics, since it is “drawn” in their likeness, modeling their body positions, clothing style and details, facial structure, and (for the most part) coloring.

His concern was deepened by the fact that the ideology promoted by the art was totally contrary to what the models were advocating during the listening session.

“The art portrayed in the picture of the synod does not correctly represent us as practicing Catholics. The artist depicted 4/5 of us with false identities seemingly to fit a more inclusive and skewed agenda,” said the young Catholic, who remains publicly unidentified.

According to the young man, McIntyre used only one label faithful to a model’s identity, that of the physics student. He explained that the model used for the “queer” label is actually “a heterosexual woman in agreement with Church teaching on sexuality,” and his own likeness was portrayed with what some perceive as an “upside down cross,” while he was “actually wearing a crucifix blessed by Cardinal Muller.”

While McIntyre intended to use the labels to represent the identities of other unspecified synod participants, as she confirmed to LifeSiteNews, the likeness of the people in her illustration so closely resemble those photographed that the face of the heterosexual woman used as a model for a “queer” person has been obscured to protect her name.

The illustration apparently further endorses homosexuality with a written quote taken from one of the synod meetings: “I don’t want my future family to be excluded because I’m gay.”

This pro-LGBTQ stance is at odds with what faithful Catholic youth actually want, said the mic-holding young man:

“This image warps the truth. The faithful youth of the Church do not want these progressive beliefs, we want truth found and rooted in Scripture, dogma, and the ecumenical councils. We need bold clergy to proclaim these truths and courageously reject peoples’ sin while seeing their humanity,” he wrote to Quick.

In fact, he said that when he had a chance to speak with the microphone, he decried the “liberal propaganda” being pushed by the synod and certain members of the Catholic Church.

“The synod was absolute heresy … As soon as we had [a] whole group discussion as depicted here, I grabbed the mic and spoke up as a conservative Catholic to tell the bishop that none of this liberal propaganda is what the youth want in the Church,” the young man recounted.

McIntyre’s artwork recently sparked controversy among Catholics when it was highlighted by the Vatican Twitter account for the Synod on Synodality, due in part to its endorsement of “LGBTQ+ identity.”

The visual artist “regularly creates” cover art for the far-left, heterodox Los Angeles Catholic Worker Catholic Agitator newspaper. She has shared to her Instagram account a few of her cover illustrations, including one that depicts a woman beginning to destroy a brick structure inscribed with the words “imperialism,” “white supremacy,” “capitalism,” “white theology,” “police,” and “colonialism.”

The illustration accompanies the magazine cover title, “Dismantle the System,” and McIntyre added in her Instagram caption, “We work to dismantle the systems of oppression in us and around us, both from within and outside.”

The Agitator promotes unorthodox theology (one article endorses the idea that “everyone,” including politicians who obstinately advocate for the right to kill innocent unborn children, such as Joe Biden, should receive Holy Communion) and promotes a radical ideology that aligns generally with antifa views.

The magazine’s editorial stance appears to prioritize this anti-capitalist ideology above even Christianity or Catholicism itself, including when addressing the Synod on Synodality. An article titled “A Synod for Justice” by Matt Harper reads:

“Justice implies something deeper and more profound than the individual acts of charity Christ centered in the Works of Mercy, our group concluded … Social justice ‘concerns the social, political, and economic aspects and, above all, the structural dimension of problems and their respective solutions.’”

While the article here quotes the Compendium of the Social Doctrine of the Church, it incorrectly suggests that social “remedies” enacted by collective bodies, such as governments, are “deeper and more profound” than an act of charity by an individual soul.

The article furthermore claims that justice “necessitates an end to hierarchies of dominance and power,” and asks of the Church, “Will we use our power to undermine all systems of power?”

McIntyre’s inclusion of “Gritty,” a muppet-like Philadelphia mascot, in her synod “Demographics” illustration, further suggests McIntyre holds Antifa views, and raises the question of whether the diocese endorses such views as well.

While McIntyre told LifeSiteNews that Gritty “was included because it captures the context of these sessions, common ground of our institutions, and the spirit of our city,” a bizarre Philadelphia City Council resolution “welcom[ing]” Gritty to the city more clearly describes what Gritty represents.

The resolution explains that the “hideous monster” Gritty “has been widely declared antifa,” and that “it has been argued that he ‘conveys the absurdity and struggle of modern life under capitalism.’”

Indeed, Gritty has often been used by Antifa and leftists on protest posters and banners, as well as on social media, so much so that a Wall Street Journal Article has attempted to reclaim Gritty from Antifa, protesting, “Keep your Marxist hands off of Gritty.”

With all the local synodal reports having been collected, a team of “experts” is now compiling the key document that will guide the next stage of the Synod – drawing from all the reports received so far. The “experts” include a range of pro-LGBT and pro-contraception individuals, including Austen Ivereigh and Msgr. Phillipe Bordeyene.