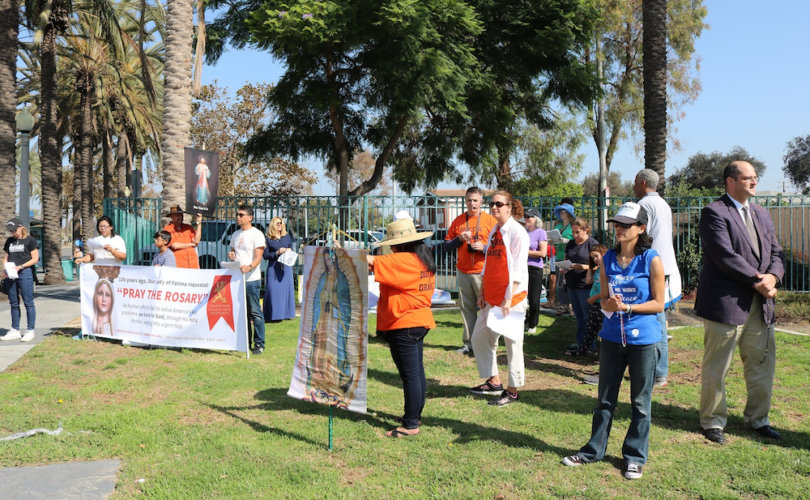 Faithful Catholics pray the rosary near where a dissident priest was speaking in the Diocese of Orange, California.

SANTA ANA, California, October 18, 2017 (LifeSiteNews) — A rosary rally drew Catholics together for a successful public witness to the faith last weekend while a dissident priest was keynoting a diocesan lay ministry event.

The rosary rally commemorated the centenary of Our Lady of Fatima with the additional intentions of praying for the U.S. Catholic diocese hosting the event and also for the priest.

More than 30 people gathered to pray across from Mater Dei High School in the Diocese of Orange, California, on Saturday, according to organizers who requested anonymity. The gathering was in conjunction with thousands of other planned rosary events across the country, organized by the group America Needs Fatima.

In addition to praying for the United States and reparation for abortion, contraception, cohabitation, same-sex “marriage” as well as the threat of nuclear war, the Orange County rosary rally attendees prayed for the diocese and Jesuit Father Greg Boyle as well.

Father Boyle has publicly dissented in the past from Church teaching on gay “marriage” and women’s ordination, and admitted his statements were “contrary to the party line.”

He gave the keynote address at the diocesan lay ministry event on Saturday to an estimated 1,500 participants, despite the Orange diocese having admitted to LifeSiteNews and the local laity in a statement that his comments were indeed “disturbing.”

The diocese’s statement played Father Boyle’s comments down, however, and said he was a priest in good standing. LifeSiteNews did not hear back on an inquiry to the Archdiocese of Los Angeles for comment on the Father Boyle appearance in light of the priest’s comments.

The Catholics concerned over the scandal and potential confusion created by the appearance were able to share their message with a good percentage of those coming to the diocesan gathering, they said. The group distributed flyers with information on Father Boyle’s problematic statements and Church teaching to roughly 30-plus percent of attendees as they arrived to the event in their cars.

Some among the Catholics had contacted the Orange diocese in advance of the event in hopes that Bishop Kevin Vann would reconsider the speaking engagement due to the risk of leading souls astray.

The group of Catholics is a diverse mix of the faithful, gathering regularly to pray, support each other, and share the faith as part of a Church Militant effort to connect local Catholics so they can “increase in personal holiness while at the same time combating the heresies and abuses that have infiltrated the Church.”

They organized the rosary rally after encountering unsatisfactory diocesan response.

One rosary rally attendee tangled Saturday with organizers of the diocesan event after attempting to attend the lay ministry gathering and hear Father Boyle’s address. He was curtly informed that he was “not allowed” because he was “with them” (the group praying the rosary).

Father Boyle is a member of the Jesuit order and conducts a ministry with incarcerated and gang-involved individuals within the Archdiocese of Los Angeles.

During a 2010 interview during the debate on California’s Proposition 8 referendum banning same-sex “marriage,” he criticized the U.S. Bishops’ position on the measure — which was in line with the Catholic Church’s opposition to homosexual “marriage.” He described it as “demonizing people,” and said Church teaching on same-sex attraction and gay “marriage” was the opposite of what God says.

And he mocked Church teaching on reception of the Eucharist for individuals married outside the Church.

Various diocesan representatives told the local Catholics in advance of Father Boyle’s appearance that the matter was being dealt with, or that the speaking engagement had been scheduled last year, and also that his topic would not be gay “marriage” or women’s ordination.

Some from the group of Catholics spoke with LifeSiteNews in advance of the event, expressing dismay that the Diocese of Orange was dismissive of the concern for souls potentially at risk by providing a venue to someone who publicly contradicts the Catholic faith.

The diocesan response did not deter those assembled to pray for the intercession of Our Lady for the event’s general intentions, the Orange diocese, and Father Boyle.

The rosary rally participant who was denied admittance to the diocesan venue told LifeSiteNews, “October 14 marked the first day of my newfound activism in defending, protecting and taking my Roman Catholic faith ‘into the street,’ the intention being to tangibly increase and strengthen my evangelization efforts in ways where I might give glory and honor to our Lord and thank Him for his mercy.”