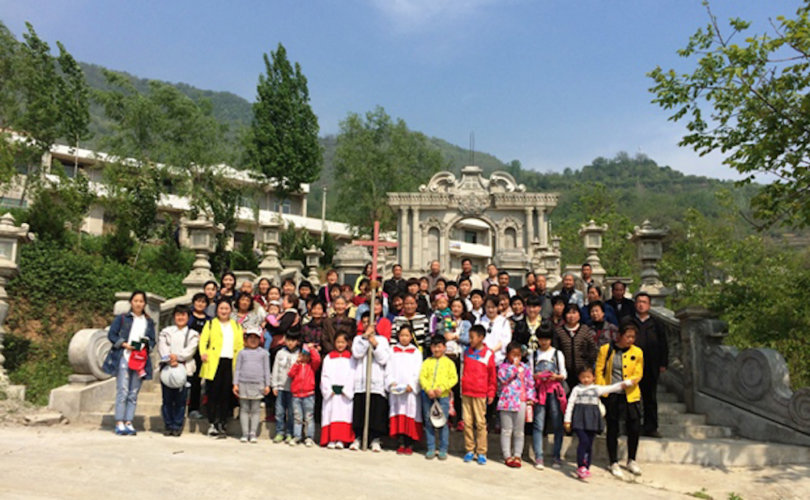 FENGXIANG, China, April 10, 2019 (LifeSiteNews) ― Two hundred Chinese Catholics put their lives on the line when they attempted to stop the Communist government from destroying their beloved shrine.

According to Fr. Bernardo Cervellera, missionary priest and the editor of Asia News, the 200 members of the underground Catholic church have been holding a sit-in on the steps of the shrine of Mujiaping since yesterday evening.

“We are willing to lay down our lives,” one of the Chinese Catholics is reported to have said.

This morning “at least 600” government officials and policemen arrived at the site to tear down the building.

Dedicated to the Sacred Heart, the shrine is considered Marian because pilgrims go there to visit its statue of the Blessed Virgin Mary. Chinese officials intend to destroy the statue as well as the sanctuary and a historical gate leading to its steps.

The shrine of Mujiaping is in the diocese of Fengxiang (Shaanxi), where last week agents of China’s communist government destroyed the church in Qianyang. It is believed that this diocese, headed by Bishop Luke Li Jingfeng until his death late in 2017, is the only one in China where neither the laity nor the bishop belong to the Communist-ruled Catholic Patriotic Catholic Association.

Cervella reported that it is unlikely that the outnumbered faithful will succeed in keeping the government officials from destroying the shrine.

David Mulroney, a former Canadian ambassador to China and a Catholic, told LifeSiteNews that the violent destruction of the Marian shrine is “heartbreaking, and shows how deeply China’s Communist Party fears religious belief.”

He added that the courage of the Fengxiang Catholics is inspiring and that they need help.

“While they deserve our prayers, they also deserve the support of the international community,” Mulroney said.

He added that the Vatican needs “to find its voice.”

“Vatican diplomats seem to think that speaking out will somehow threaten the agreement that they recently signed with Chinese authorities,” Mulroney stated.

“They need to understand that what’s happening at Mujiaping is the fruit of that agreement,” he continued.

“By speaking out, standing up for the faithful and the truth, Rome can undo some of the damage done by its naive infatuation with China’s communist leaders, who respect neither faith nor truth.”

In October 2018, soon after the Vatican and China signed a historic accord, Chinese authorities destroyed the Marian shrines of Our Lady of the Seven Sorrows in Dongergou (Shaanxi) and Our Lady of Bliss, also known as Our Lady of the Mountain, in Anlong (Guizhou).