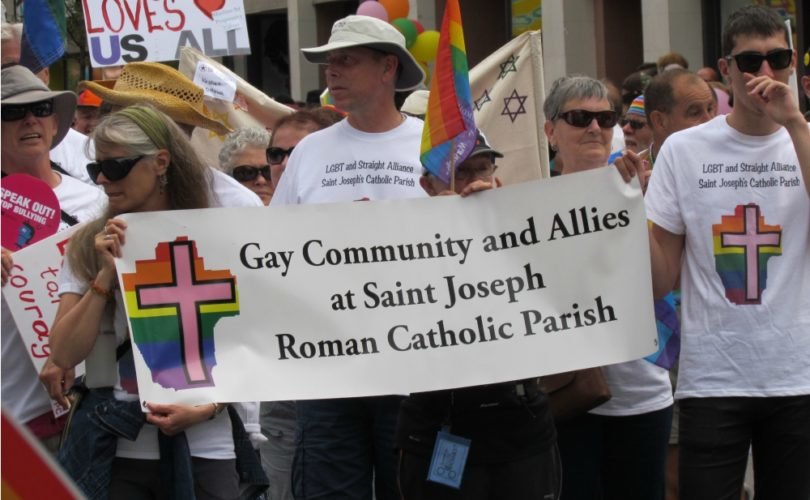 OTTAWA, August 25, 2015 (LifeSiteNews) – While parishioners praying on a public sidewalk in front of St. Patrick’s Basilica during Sunday’s Capital Pride Parade were told to go inside the church to avoid confrontation, St. Joseph’s Catholic parish had a delegation marching in the parade.

One Catholic activist believes it shows a “schizophrenia” in the Catholic response to the traditionally lewd, loud, and raucous event that underscores a “greater question.” John Pacheco, founder of the Catholic men’s group the Legionnaires of St Maurice and organizer of Sunday’s public prayer witness, said this is: “What is the appropriate response of Catholics to a great evil, an evil that can destroy a society?”

And more specifically, how should the Catholic Church in Ottawa have dealt with the “provocation” of Capital Pride deciding to alter this year’s parade route to take it right past St. Patrick’s Basilica, he questioned.

While the march – which in the past has featured semi-nudity and hyper-sexualized dancing – did not, as initially feared, interrupt the midday Mass, it was intentionally aimed at Catholics, Pacheco asserted.

“You had a gay Jesus walking in the parade,” he told LifeSiteNews in a telephone interview. “They prepared with signs. One sign was ‘Stop faith-based bigotry.’”

Pacheco’s own response, as he wrote August 24 on The Catholic Legate blog, was to issue an eleventh-hour call for public prayer, to which an estimated 50 people responded.

But their intention to be a public witness was thwarted, according to Pacheco, when St. Patrick’s rector Father Bosco Wong, encouraged by parish council member Sheila Jones, told the group to pray inside the church.

After confirming with Wong that this was a direct order, Pacheco decided obedience trumped all, and asked his people to comply, writing on his blog: “We were there to pray in reparation to Our Lord,” he wrote, “but also for the misguided and hurting souls who were seduced into the lie of the homosexual lifestyle.”

An estimated twenty people chose to remain outside.

But Father Wong told LifeSiteNews his chief objection was that Pacheco’s group stood with their backs to the Pride participants. “To me personally, that gesture is a weapon to judge and to accuse. … It invites someone who is in the march who might not be as balanced to do something irrational.”

“I was not opposed to them praying the rosary,” Wong said. He also stated he didn’t know the group was coming, and that he had a responsibility as the rector to protect his church. “I just don’t want to create an incident where the basilica will be violated.”

Pacheco says he doesn’t recall Wong stating that if the people praying turned around to face the parade, they could stay. “Maybe he said that to me and it didn’t register. … I would have been very happy to do it. … It’s just a big misunderstanding.”

People had asked Pacheco what to do, and he advised that they initially start the rosary with their backs turned to the march “because we didn’t know what was coming” as far as nudity or scandalous conduct. “It was really more protection to the women who came and joined us as well. It’s a difficult place to be.”

Pacheco says he understands why Wong did what he did. “He has an obligation to try and protect the parish, and it’s one of the reasons I acted the way I did. … At the end of the day, God’s going to reward obedience, I think.”

At the same time, he finds it galling that in the end Catholics could not even stand on a public sidewalk and pray the rosary while “St. Joseph’s Catholic Church has a banner in the gay pride parade” and “there’s no canonical action against that.”

In Pacheco’s view, this “trepidation, this fear of engagement, is very unhealthy. I don’t know how this schizophrenia that we as a church are adopting is furthering the Gospel.”

Pacheco emphasized that “we want to share our faith” with the Pride marchers, “and say that God loves them, that He has a plan for them, and that their lifestyle is actually against their own dignity and that we’re not here to judge them but to help them see God’s saving love.”

“We keep talking about the new evangelization, we keep talking ad nauseum about this idea that we need to dialogue with the culture,” he told LifeSiteNews, but “when we have an opportunity to do that, all of a sudden we have to hide and cower.”

“At the end of the day, we all have to get real,” Pacheco said. “Maybe we just have to admit that we just don’t want to have any confrontation at all, and perhaps it’s just better that we fold up the tent and go home.”

“At least that’s being honest.”

An email response from the mayor’s office stated, “The City was advised that the proposed schedule would not interfere with the 12:15 pm service, which they indicated normally ends at about 1 pm. Based on this information, provided directly by St. Patrick’s Basilica, City Event Staff determined that the Parade plan was acceptable.”

According to Wong, a member of the parish council told the Mayor’s office that Mass ended by about 1:15 or 1:30, and the mayor’s office must have misunderstood. The 12:15 Mass would never end by 1:00, he pointed out.

Wong told LifeSiteNews he is going to make recommendations to the city to change both the route and the time of the Capital Pride parade next year.

Pacheco and Hall are also looking ahead.

“Is this show going to be different or will it be another occasion to show how good we all are at capitulation?” wrote Pacheco in his blog, adding: “We need more troops on the ground and this issue needs to be raised at the highest levels of the Church here in Ottawa.”

Hall, for her part, is clear what she will do. “If the route is not changed, I will be outside with my rosary.”