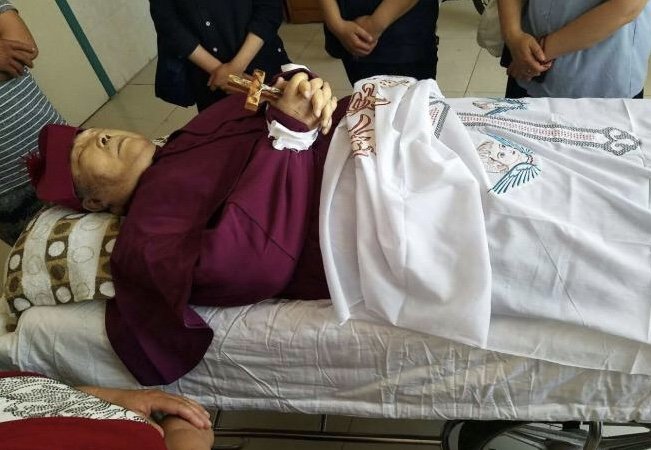 TIANJIN, China, June 13, 2019 (LifeSiteNews) ― A heroic bishop of the underground Catholic Church in China has died under house arrest and will not be permitted a Catholic burial.

Asia News reported that Bishop Stefano Li Side, the legitimate ordinary of Tianjin, died June 8 after a long illness. He was 92 and had been living under house arrest since 1992. Because Li never joined the schismatic so-called Chinese Catholic Patriotic Association, the state-backed religious authorities will not permit his body to be buried in a Catholic cemetery.

So far, it is unclear whether the late bishop will have a public funeral. According to Asia News, the underground Catholics of Tianjin have been negotiating with the local government for a funeral ceremony.

“One of the faithful told AsiaNews that ‘the local government is much more civil than the PA,’” the Catholic news portal reported.

“Until now, permission has only been given to carry out masses and funeral orations in every church of the diocese. The body of the bishop, after his death, was placed in a funeral parlor (a lay mortuary) and not in the Cathedral of St. Joseph (Xikai) in Tianjin.”

Apparently, some underground priests who entered the funeral parlor to pray for the bishop were allowed to stay for only 10 minutes and were subsequently forbidden to say Mass in a church.

David Mulroney, a former Canadian ambassador to China, told LifeSiteNews via email that he had followed the events around Li’s death “with sadness and concern” and that the late bishop’s life was “one of heroic witness.”

“Before, during and after the Cultural Revolution, he was severely punished for his faith,” Mulroney said.

“Despite years of cruel punishment, Li remained faithful to Rome. For that reason, the Communist Party is seeking to have him buried as quickly and anonymously as possible. They will do as much as possible to prevent local Catholics from being inspired and encouraged by his example,” he continued.

The former diplomat said this explains “perfectly the terrible dilemma facing the Church in China.”

“The Vatican believes that the recent agreement with Beijing will grant the Church the space and official toleration it requires to serve the faithful in China,” Mulroney observed.

“China’s Communist Party, however, interprets the agreement as Rome’s tacit approval for the sidelining and ultimate elimination of the underground Church and any meaningful links with Rome.”

“Beijing wants a Church staffed by dutiful bureaucrats, not saints and martyrs,” he concluded.

Steven Mosher, author of Bully of Asia, also underscored that the agreement between the Holy See and the Chinese government has not helped Catholics in China.

“Anyone who thinks that conditions for Catholics have improved following the signing of the secret Sino-Vatican Agreement has only to reflect on the disrespectful way that Communist officials, including representatives of the Patriotic Church, treated the good bishop,” Mosher told LifeSiteNews via email.

“They seemed almost more afraid of him in death than they were in life,” he continued.

“Perhaps, given that Bishop Stefano Li suffered a dry martyrdom for over 50 years and is now a saint in heaven, they should be.”

AsiaNews related that Li was born on October 3, 1927, to a large Catholic family and in 1955 was ordained a priest of the Tianjin diocese.

“Following Mao Zedong's seizure of power and the launch of the Patriotic Association, to control the Church and create an ‘independent’ community, he was arrested in 1958,” AsiaNews related.

“Released on 16 February 1962, he returned to service in the Cathedral of Saint Joseph in Tianjin, but was again arrested and imprisoned in 1963 until 1980, sentenced to forced labor camps.”

After his return to the Tianjin Cathedral, Li was secretly ordained the bishop of the diocese. The Chinese authorities did not recognize his episcopal status, and he was imprisoned again in 1989 after taking part in an assembly of the Chinese Bishops’ Conference. Li was released in 1991 and returned to his cathedral, only to be placed under house arrest in 1992 and sent to the small mountain village where he lived out the remainder of his days.

AsiaNews reported that most of the “official” priests in the diocese were loyal to Li, and that Tianjin also has an auxiliary bishop under house arrest in the mountains, the 92-year-old  Melchiorre Shi Hongzhen.