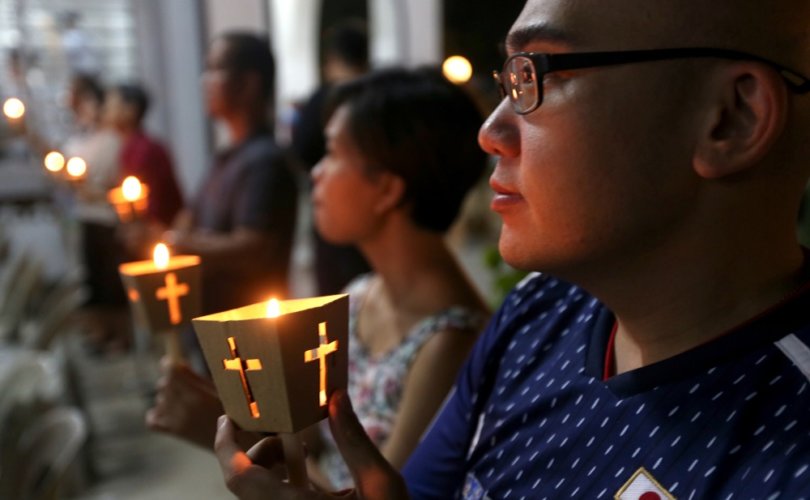 BEIJING, November 20, 2019 (LifeSiteNews) — A faithful Catholic Chinese bishop is believed to be hiding from Chinese communist authorities following his refusal to sign an agreement to join the communist-run “patriotic church” that would allow him to serve his flock openly.

According to AsiaNews, the 61-year-old auxiliary bishop Vincent Guo Xijin of Mindong, Fujian province, is reportedly exhausted by his ordeal, having been harassed for more than a year by the Chinese government. Although under the watch of government security guards, Guo escaped from the headquarters of Msgr. Vincenzo Zhan Silu, the officially recognized bishop of Mindong, and is now in hiding.

AsiaNews reported that the police had hoped that Zhan would have convinced Guo to sign the agreement and effectively join the schismatic religious association established by the Chinese government.

Currently, Guo’s whereabouts are unknown. His fellow Catholics are calling on all Christians to pray for his safety.

Guo is one of a number of Catholic bishops who human rights experts feared would face official persecution, following a secret “provisional agreement” Vatican diplomats reached in 2018 with China on bilateral relations and the ordination of bishops. Guo refused to join the Chinese Patriotic Catholic Association, even while he relinquished his role as the Vatican-approved bishop of Mindong last year because of a request he received from Pope Francis.

In light of the bilateral agreement, the Vatican released “Pastoral Guidelines” in June of this year to bishops and clerics in China, which recognizes the “complex” reality of the relations between the Holy See and China, and asks that the laity not to judge their pastors’ decisions too harshly. The guidelines allow clergy to register with the government, even under protest.

Retired cardinal Joseph Zen of Hong Kong, however, stated afterward that such a registration can be reached only by compromising the Catholic faith. Cardinal Zen had earlier begged Francis, in person, not to go through with the “provisional agreement” with China, to no avail.

There are, effectively, two organizations calling themselves churches for Catholics in China, but only one of them is in union with Rome. The government-established Chinese Patriotic Catholic Association operates openly, having bishops and priests approved by the communists. The officially recognized religious association, which Catholics loyal to the Holy See refuse to join, is unacceptable to so-called “underground” Catholics.

Guo and other clerics have been subjected to blackmail, threats, and other pressure exerted by the authorities to join the officially recognized religious association, which is not in communion with the papacy. In solidarity with his priests, Guo has refused to sign the agreement with communist authorities.

Following the “provisional agreement” reached between China and the Vatican last year, the Vatican’s excommunication of Msgr. Zhan was lifted. At the request of Pope Francis, Guo relinquished his see to Zhan and thus became an auxiliary. Francis himself had asked Guo to make a “sacrifice for the general situation of the Chinese Church” so that Zhan, of the officially recognized religious association, could become the Vatican-approved bishop of Mindong. Zhan is one of the seven previously excommunicated bishops whom the pope has re-admitted to communion with the Holy See.

Guo’s removal from his see has saddened and confused faithful Catholics in China, who have long suffered for their loyalty to the universal Church. Of the approximately 90,000 Catholics in Guo’s Mindong diocese, some 80,000 belong to the “underground” Church that is independent of the government. Pope Francis called upon Guo to integrate his flock with the minority official religious association.

Since the onset of communist rule in China in the 1940s, Catholics and other believers have been targeted for persecution by the government. In the early days, after Mao Tse-tung and his communist cadres triumphed over the forces of nationalist Chiang Kai-shek, Catholic priests and laity were murdered and imprisoned. Catholics are still considered a foreign element in the totalitarian country.

For decades, the Chinese government had clashed with the Vatican over the ordination of bishops, leading to a diplomatic impasse that last year’s Vatican-Beijing accord ostensibly sought to resolve. While there was hope that formal diplomatic relations might ensue, the initial concern that the communist government would abuse the agreement has been validated by an uptick of persecution of Catholics and destruction of their churches.

The militantly atheist Chinese government has been engaged in a years-long crackdown on religion, including Islam and the spiritualist Falun Gong movement. The government has banned Arab-style domes on mosques, for instance, and has imprisoned as many as one million Uighur Muslims in concentration camps. According to the United Nations, China is subjecting the Uighur detainees to “re-education” in the camps, where they are subjected to privation, torture, psychological abuse, and political indoctrination.

As for Catholics, there have been numerous instances when Chinese authorities have razed churches or stolen religious statues on public display. China’s communists insist that freedom of worship is guaranteed by their system, so long as believers worship in state-approved churches, mosques, and temples. All religious believers, assert the Chinese authorities, must “be subordinate to and serve the overall interests of the nation and the Chinese people,” making it explicit that they must also “support the leadership of the Chinese Communist Party.”

Retired U.S. diplomat John Tkacik, who served for years in China, noted in an email to LifeSiteNews that the Chinese Communist Party decreed in March 2018 that religious affairs are now the sole province of the party, not the government. This fact, he wrote, “completely nullifies the Vatican's September 2018 ‘provisional agreement’ with the Chinese foreign ministry on bishops.”

Despite pleas from Catholic prelates in China, Tkacik wrote, the Holy See “unwisely” assumed good faith on the part of the Chinese communists, thus signing over the Church’s apostolic succession to the Communist Party. Questioning whether the Vatican will offer support to Bishop Guo, Tkacik said that he doubts that Guo will find refuge in Hong Kong, where democracy advocates are embroiled in violent conflicts with armed police. It remains unclear, he wrote, whether Guo can leave China at all.

Recalling that Tibet’s Buddhists “learned the hard way” that the Communist Party makes all religious decisions once it is in control, Tkacik noted that the party even decides who will be the successor to the Buddhists’ revered Dalai Lama. Averring that many Catholics will remain “underground” in China, he wrote: “The Holy See's apostolic authority throughout the world is undermined by its failure to secure the Church in China from the control of the militantly atheistic Communist Party.”