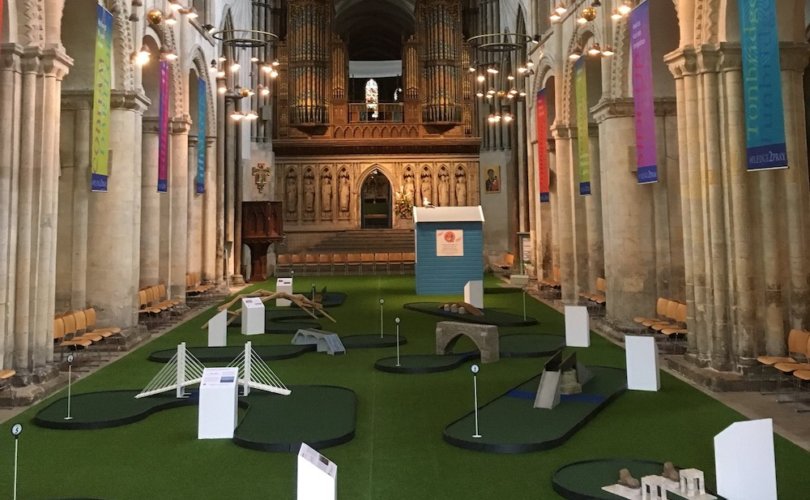 ROCHESTER, England, July 29, 2019 (LifeSiteNews) – The second-oldest cathedral in England has become a source of controversy for announcing it will soon host a decidedly unconventional secular feature within its historic walls: a mini-golf course.

Founded in 604 AD, Rochester Cathedral is second in age among English churches only to Canterbury, and was consecrated by St. Augustine himself. Earlier this month, the cathedral’s current leadership announced it’s partnering with the Rochester Bridge Trust to temporarily install a “bridge-themed adventure golf course” in the Medieval Nave. Running through the month of August, the course is being billed as a free attraction to educate children about bridge construction and foster reflection on more metaphorical bridge-building.

St. John Fisher, martyr for the sanctity of marriage, was the Bishop of Rochester from 1504 to 1535.

“The course forms the centrepiece of a ‘Building Bridges’ theme running through the summer,” Rev. Rachel Phillips, Canon for Mission and Growth at Rochester Cathedral, explained. “As well as the physical bridge which has stood over the River Medway since Roman times, the invisible but equally historic links between the Cathedral and the surrounding community are also bridges of a kind; we hope that, while playing adventure golf, visitors will reflect on the bridges that need to be built in their own lives and in our world today.”

The cathedral promises that the golf course will not interfere with normal church services or functions:

Worship continues unaffected with at least 3 services per day and the adventure golf is only taking place in the Nave of the Cathedral, with other spaces available for prayer and quiet as usual.

Reactions to the proposal have been largely negative among social media readers and conservative religious figures. “Young people won’t come to a church that doesn’t take itself seriously,” The American Conservative’s Rod Dreher remarked. “Who ever thought that Christianity in England would expire not with a bang, or even a whimper, but with a bogey on the ninth hole?”

You seem to have a hard time understanding this very simple sentence: “My house shall be called the house of prayer”.

Maybe go all he way and stick a Starbucks and McDonalds concession inside too while you're at it?

At what point does an act of sacrilege become so palpably stupid that the act itself is proof against adequate reason being possessed by the agent so as to excuse from moral a/o criminal liability? I ask because I think Rochester Cathedral authorities might have found that point.

“I was ‘ordained’ as an Anglican in this Cathedral. What an embarrassing shambles,” Fr. David Palmer from the Ordinariate of Our Lady of Walsingham lamented, the Daily Mail reports.

“English Catholics care for our ancient cathedrals, even if they are in the possession of the usurping Church of England,” Deacon Nick Donnelly told Church Militant. “We are very aware that the Mass was celebrated at the altars of these cathedrals. What is happening at Rochester Cathedral is sacrilege against God.”

As to the cathedral's claim that the attraction will attract newcomers to church, Donnelly called it “taking ‘dialogue’ with the world to extremes, which in reality means the mundane invading what was sacred. It betrays a lack of faith in the power of God's word to attract modern man. What next to appear ‘relevant’ at Rochester Cathedral? Pole dancing around the pillars?”