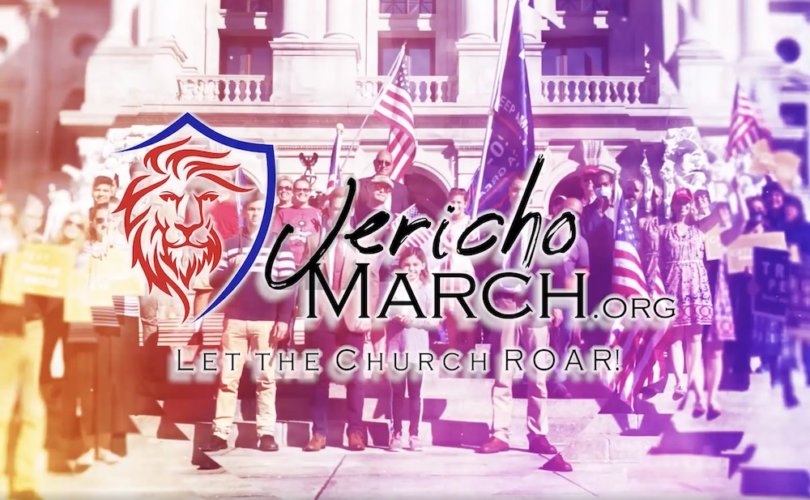 WASHINGTON, D.C., December 7, 2020 (LifeSiteNews) – With battles ongoing across the country over allegations of major fraud in last month’s presidential election, efforts of concerned Christians and Jews to pray and protest for election integrity are set to culminate on Capitol Hill on December 12.

The Jericho Marches are about “collectively praying to God to intercede, expose a particular darkness, and bring about justice,” particularly “for election integrity, transparency, and reform to preserve free and fair elections in America for this generation and generations to come — free from any corruption or interference, both foreign and domestic,” according to the Jericho March website.

The movement is named after the Biblical story of the City of Jericho, which the group notes was a “city of false gods and corruption,” around which “Joshua was instructed to march around the walls” seven times.

“Just as the Israelites circled the walls of Jericho until the walls fell, so we use peaceful means of protest until truth, transparency and justice prevail,” Weaver says in a press release. “What’s at stake is the future of free and fair elections in our Republic. We seek true election reform to protect our American freedoms and the integrity of our election process. We believe that God has blessed America and will continue to bless her, if our people remain faithful to God’s call to holiness and repentance.”

From now until the Electoral College makes the next president official on December 14, the group group “calls all patriots and people of faith to go every day at noon local time to their Capitol buildings and pray, fast, and march around them seven times until the walls of voter fraud and corruption fall down and the American people are allowed to see the truth about this election,” as well as to “contact local, state, and national officials and demand full audits, any and all fraudulent and illegal activities are exposed, and only LEGAL votes are counted to reveal the true will of the American people in this election.”

The Jericho March “has already engaged over 700,000 concerned people and they will continue circling their capitol buildings in all 50 states daily at noon, with a special emphasis on the swing states of Arizona, Georgia, Michigan, Nevada, Pennsylvania, and Wisconsin,” organizers say. The Jericho Marches, which are self-led by participants, are “a unified celebration of authentic and diverse Judeo-Christian forms of worship including praying, preaching, singing, rosary recitations, Eucharistic processions, and blowing shofars.”

These efforts will culminate in a national “Let the Church Roar” event in Washington, D.C. at noon on Saturday, December 12, during which participants will march around the United States Capitol seven times. Those interested in participating can sign up to receive more information here.

President Donald Trump’s lawyers claim they have identified more than double the number of questionable ballots necessary to prove he is the legitimate winner of the 2020 presidential election. Litigation is ongoing.

For Catholics, December 12 is the feast day of Our Lady of Guadalupe, patroness of the unborn.