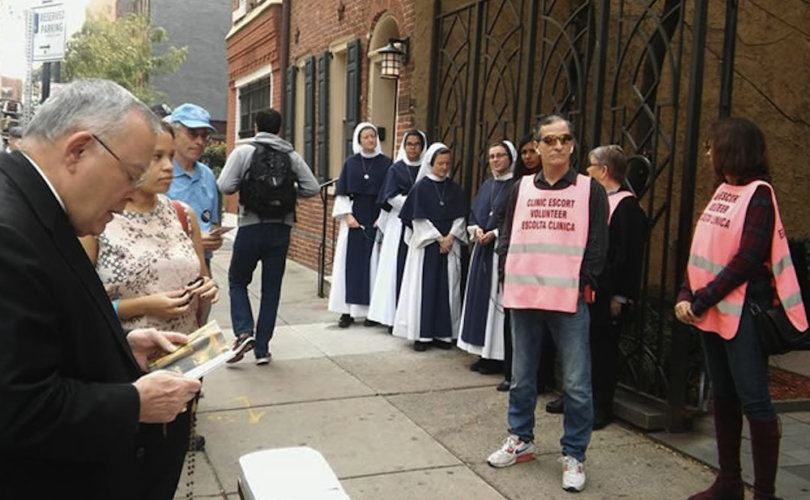 BRYAN, Texas, November 8, 2017 (LifeSiteNews) – A worldwide 40-day vigil outside abortion clinics has directly saved the lives of 546 children and potentially the souls of 546 mothers and fathers.

“The largest 40 Days for Life campaign so far has ended – and here’s a huge thank you for helping save so many lives!” Shawn Carney wrote on the organization’s website.

A global tally from 375 vigil locations showed 546 women who have changed their mind toward giving life.

“In many cases, all it took was the simple act of showing up to pray on the sidewalk,” Carney said.

Wonderful stories keep coming in from across the globe. In Rochester, New York, a 14-year-old girl and her mother were entering Planned Parenthood when a vigil participant gave them pro-life literature to peruse.

“A few minutes later,” Rick shared, “they came out and asked the volunteer where else they can go for help.” And they were off to a pro-life pregnancy center.

In Tallahassee, Florida, vigil counselors urged a pregnant woman to take a free ultrasound. “The new mom decided not to have the abortion after seeing the reality of the living child within her,” 40 Days for Lifer Toni excitedly related.

Another older woman came up to pro-lifers in Tallahassee simply to thank them for talking her daughter out of getting an abortion.

Volunteers spoke with a woman toting two children in Providence, Rhode Island. They assured the overwhelmed woman that there were many people willing to help.

The woman changed direction and went into a pro-life mobile unit, where she agreed to view a live ultrasound of her baby.

Her three-year-old exclaimed, “Is THAT our baby?!”

And the woman chose life.

Planned Parenthood told a San Antonio woman that she would have to pay for her pregnancy test. She hesitated and left, encountering 40 Days for Lifers outside.

“She teared up when she explained that she had two children at home and needed to go back to work,” a volunteer said.

She, too, got a free, immediate ultrasound. After seeing her child, the woman confirmed she chose “life for her baby.”

Archbishop Charles Chaput led 30 volunteers in prayer at a Philadelphia Planned Parenthood in front of the intimidating presence of four clinic escorts.

An obviously burdened woman came up to volunteers in Greensboro, North Carolina.  “She told me she needed prayers,” Salvador said. “I asked if she was there for an abortion and she said ‘yes,’ so we started praying with her.”

After they prayed, the woman left without going into Planned Parenthood.

From Medellin, Colombia, to Vukovar, Croatia, to La Paz, Bolivia, to England to Canada, and from Manhattan to El Paso, women responded to 40 Days for Life prayers and counseling to choose life.

One new mother in Birmingham, England, told vigil participants, “No one else knows I’m pregnant and I didn’t know what to do.” She had been walking all day, just praying that God would direct her, “but there was no sign,” she said.

Keeping her abortion appointment, the young woman encountered volunteers outside.  “As I came to the entrance … I saw that lady holding a cross, and I knew that was my sign to keep my baby.”

A woman in Riyon, Nigeria, became pregnant as a result of rape, and she faces extreme poverty. Nevertheless, she chose life, and 40 Days for Life volunteers are helping her get proper medical care.

The amazing stories of God’s intervention through 40 Days for Life go on and on. In Flint, Michigan, an abortion worker quit. As she drove away, she explained that seeing the pro-lifers peacefully praying was the impetus for her leaving the industry.

The life-saving campaigns continue. Next spring, 40-day prayer vigils will begin again and pro-lifers will re-enter the trenches, praying throughout Lent.