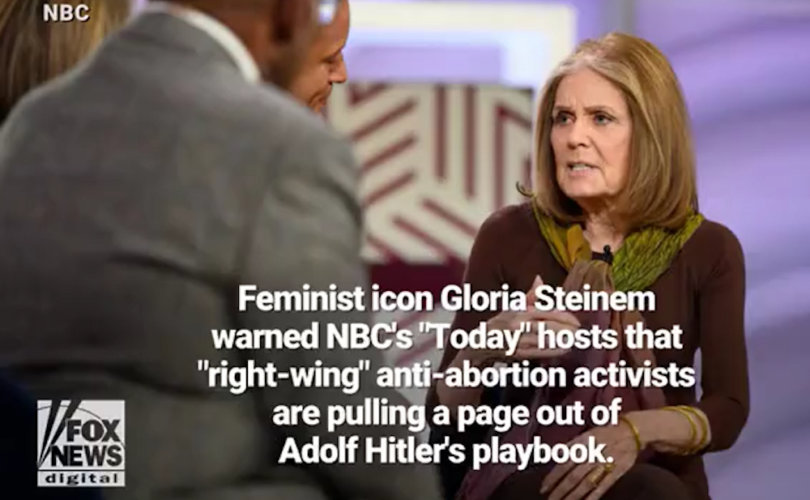 NEW YORK, February 28, 2019 (LifeSiteNews) — In the midst of a book tour, feminist Gloria Steinem said Tuesday that pro-lifers can be compared to Nazis.

A lifelong advocate of abortion, Steinem appeared on NBC’s “Today” show to promote the new edition of her 1983 book “Outrageous Acts and Everyday Rebellions.” Referring to Nazi dictator Adolf Hitler’s position on abortion, she commented on current debates over the value of human life.

Co-hosts Dylan Dreyer, Al Roker, and Craig Melvin spoke with Steinem, 84, during the third hour of their show. When Melvin asked Steinem what is the takeaway for a “new generation” of readers, she answered, “The new generation of reader is instructing me by saying that these essays are still relevant.”

Steinem got some laughs from the co-hosts when she mentioned a “parody” she wrote titled “If Men Could Menstruate.” Then she said, “On a more serious note, to put it mildly, is why Hitler was actually elected, and he was elected and he campaigned against abortion. I mean, that was — he padlocked the family planning clinics. OK,, so that is still relevant in the terms of the right wing. So there were very few things, actually, that I had to take out.”

Steinem first published “If Hitler Were Alive, Whose Side Would He Be On?” in the October-November 1980 issue of Ms. magazine. It later became a chapter in her book. In it, she denounced pro-lifers and conservatives just before Ronald Reagan was elected to the presidency. In the chapter, Steinem drew parallels to Hitler's National Socialist dictatorship.

The chapter begins with quotes from conservatives who compared the genocide of abortion to Hitler’s murder of six million Jews.

When Melvin said on the “Today” show that “some have tried to pervert the term … feminism,” Steinem recalled, “I've been called a 'femi-Nazi' by various people … we won't name.” Nodding in agreement, co-host Melvin said, “Let's not name names.”

Pro-lifers deplored Steinem’s statements. For example, conservative author and film director Dinesh D’Souza noted that the comparison Steinem drew is inaccurate. “Hitler was vehemently anti-abortion for Nordic Germans, and vehemently pro-abortion for the so-called inferior races. This can hardly be called a pro-life position!” he tweeted.

According to the authors of Abortion and Eugenics in Nazi Germany, which was published in the March 1988 “Population and Development” journal, while abortion was illegal for persons determined to be Aryan were discouraged, hereditary health courts held that abortions for racist “eugenic” purposes were exempt from punishment. For certain categories of persons, including Jews, those with Down syndrome and mentally ill, sterilization and abortion could be performed concurrently, “provided the abortion occurred before the sixth month of pregnancy and was approved by specially appointed experts who did not participate in the operation.”

Steinem is making the rounds while controversy continues to swirl after legislation was approved in New York last month that allows abortion throughout pregnancy. In addition, U.S. Senate Democrats voted down a bill that would have protected newborn baby survivors of abortion and called for them to be recognized as human beings with the rights of citizenship and deserving of medical care. And in Virginia, Democrat Gov. Ralph Nothram suggested last month that whether a baby who survives abortion should live or die is a decision to be left to the mother and her physician.

In November, Steinem appeared in a Netflix documentary on the Supreme Court’s decision in Roe v. Wade. She described the decision to endorse the right to abortion as the “basis of democracy.”