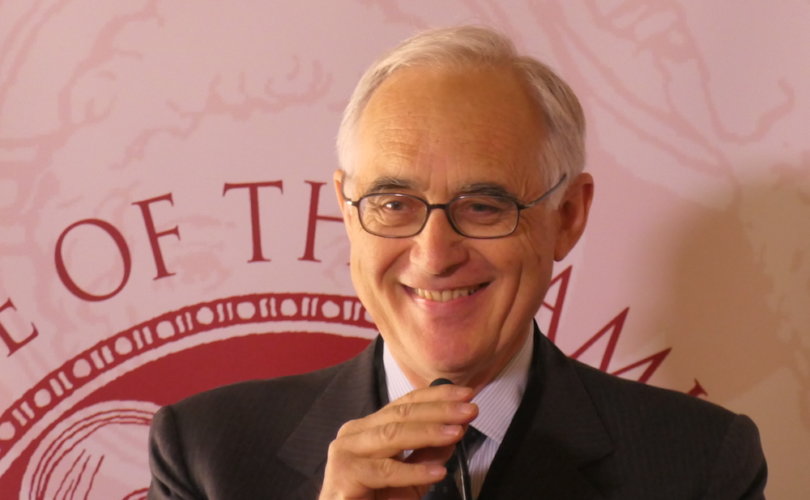 ROME, May 18, 2017 (LifeSiteNews) — Famed Catholic historian Roberto de Mattei says the family is facing a “profound crisis” as the result of a sexual revolution that unleashed its greatest violence in the 1960s, but had its “first decisive moment” in the Protestant Reformation.

“This crisis is founded on the idea that only in the sexualization of society, the revolutionary process can find its fulfillment,” de Mattei, former professor at the European University of Rome and founder of the Lepanto Institute, told participants at the fourth annual Rome Life Forum on Monday.

“The act of procreation is the object of anti-Christian hate, because this affirms that man has an end which surpasses him,” he said.

“The negation of procreation turns Christian morals upside down and affirms a Gnostic metaphysical principle: sex as an ultimate end of man, closed up in its own immanence.”

Indeed, “hate for the family characterizes all the heretical sects,” including medieval sects that proclaimed man was “divinized” and promiscuous sex a return to the state of Adam and a liberation.

These were harbingers of the greater assault against the family that followed the “religious revolution” that “exploded with all its virulence” after Martin Luther nailed his theses to the door of Wittenberg Cathedral on Hallowe’en 1517.

Out of this came “antinomianism” — or negation of the moral law — preached and lived by Anabaptists, for whom “as for the Gnostics of the first centuries, the ‘spiritual’ man is incapable of sin,” de Mattei said.

The Anabaptist belief that man had recovered his original innocence led to a reign of terror by self-proclaimed prophets in Münster, as well as Familists sect in Friesland, and the Ranters and Libertines in England.

While these attempts at a “pan-sexual utopia” were ultimately crushed by the state, the heresy persisted and moved from the “religious level to the political level” in the French Revolution.

When the revolutionaries stormed the Bastille on July 14, 1789, to release political prisoners, they found only seven prisoners, but among these was the notorious Marquis de Sade, who thereupon joined and influenced the revolution, according to de Mattei.

De Sade, who died in an insane asylum, provided the theory of “revolutionary pansexualism,” de Mattei said, and “listed as revolutionary achievements the following: blasphemy, theft, homicide and every type of sexual perversion, incest, rape, sodomy.”

“All gender theory is already contained in these words,” de Mattei said.

Moreover, “De Sade wants to convince us that vice is a virtue, that horror is beautiful, and that torment is a pleasure. In this sense, his vision of the world is satanic,” said de Mattei.

“The last two centuries have seen his plans realized, to a great extent. That which still hasn't come to pass is, maybe, part of our future.”

The French Revolution, which implemented divorce, among other things, was brought to completion by the Bolshevik Russian Revolution, de Mattei said.

The Bolsheviks introduced divorce a few weeks after seizing power in 1917, and in 1920 they legalized abortion, the “first time in the world that the procedure was available without restriction,” de Mattei said. In 1922, the Bolsheviks decriminalized prostitution and homosexuality.

De Mattei also detailed the influence of the Austrian psycho-analyst Wilhelm Reich, who wrote the seminal text for “Marx-Freudism,” and who saw “the family as the repressive social institution par excellence, and affirmed that the nucleus of happiness is sexuality.”

These ideas spread to the West and were disseminated by influential intellectuals such as Herbert Marcuse and Michel Foucault.

And the Catholic Church, the “one force alone” that could have “stopped this process of moral dissolution,” had its “own revolution” in the Second Vatican Council of 1962 to 1965, noted de Mattei.

“We did not arrive at Pope Francis' Exhortation Amoris laetitia (2016) in a single day,” he said. “Fifty years were necessary, but the roots are there, in the Second Vatican Council.”

Added de Mattei: “And the Council didn't do anything except search for a compromise between the doctrine of the Church and the anti-Christian theories of the modern Cultural Revolution.”

The “remedy” to the crisis is “indicated by Pius XI in Casti connubii: meditate on the Divine idea of the family and marriage, and live in conformity to this model,” concluded de Mattei.

The family, he said, “contains life, in itself. Physical life contained in the cribs which multiply, and spiritual life, expressed by parents and children united in prayer to God Who can do everything.”

He also pointed out that at Fatima, “Our Lady announced that Russia would spread its errors in the world.

The message of Fatima is “a message against any form of Gnostic and Egalitarian ideology, as it was [against] socialism in the twentieth and twenty-first century,” de Mattei said.

“The last apparition of Fatima October 13, 1917, that of the Holy Family, constitutes in this sense a manifesto which sums up all our principles and which opposes all the errors of our time.”

The full text of Professor de Mattei’s talk is available on LifeSiteNews here.

The Rome Life Forum was organized by Voice of the Family and takes place May 18 and 19.