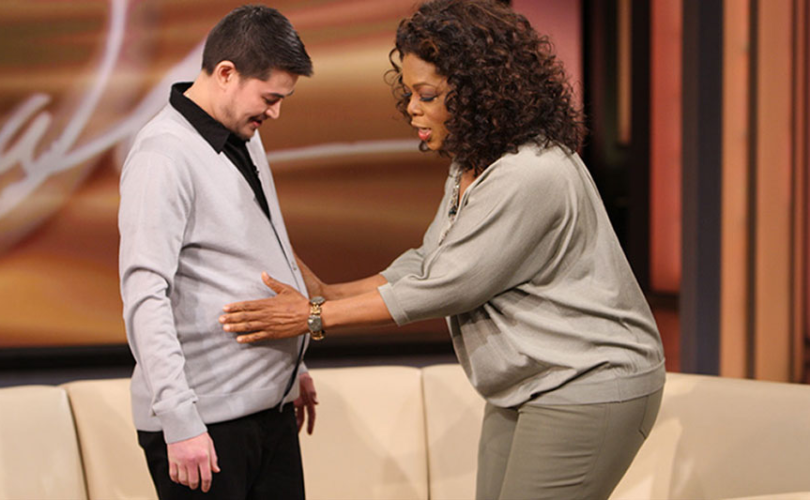 "Thomas" Beatie, the female-to-male transsexual who gained international fame as a "pregnant man" in 2008, appears on Oprah.

A female-to-male transsexual who received international fame and adulation as the world’s first “pregnant man” in 2008 has been arrested on charges of stalking the woman she fought to divorce in 2013.

“Thomas Beatie,” 40, who was born Tracy LaGondino, was charged with felony stalking in Phoenix last week after her ex-“wife,” Nancy Beatie, discovered a GPS tracking device hidden on her car.

Nancy Beatie told police that despite having taken out a restraining order against her, “Thomas Beatie” had repeatedly surprised her by showing up wherever she happened to be and interrogating her about places she had visited.

“The first feelings were fear, that he's [sic] been doing this to me for so long,” Nancy Beatie told KTVK. “Then a little bit of not feeling well, like sick. Like, oh my gosh, he's [sic] been knowing everywhere I've been, stalking me, and it's scary.”

The transgender individual admitted to installing the device and recharging it as needed, but told police she believed her actions were legal because she was the registered owner at the time of installation.

Under Arizona law, it’s true that owners of vehicles can install tracking devices without notifying other drivers of the car.  However, when Tracy signed ownership of the vehicle over to Nancy in 2013, she failed to remove the tracking device or inform Nancy of its existence, leading to last week’s stalking charge.

“Thomas” and Nancy were “married” in Hawaii in 2003, shortly after “Thomas” – then Tracy – underwent hormonal treatments and a double mastectomy to make herself appear more masculine.

Prior to the “wedding,” Tracy changed her name to “Thomas” Beatie through Hawaii's Office of the Lieutenant Governor, then changed the name and sex on all of her state and federal documents, including birth certificate, driver's license, passport, and social security index, making her legally “male.”

However, she opted not to have genital reconstructive surgery right away, nor did she remove her reproductive organs.  So when the couple wanted children and Nancy turned out to be sterile, “Thomas” underwent artificial insemination and delivered three babies between 2008 and 2011, even though she was legally recognized as a man.

The case sparked international interest and public praise from celebrities like Oprah Winfrey, Barbara Walters, and Larry King, and landed “Thomas” on lists including Barbara Walters’ Top 10 Fascinating People of 2008, Details Magazine’s 40 Most Influential Men in the World, Time Magazine’s Time 100 Finalist, Advocate Magazine’s People of the Year 2008, and the Huffington Post’s Top 20 Trans[sexual] Pioneer[s] of 2011.

All that notoriety soon launched “Thomas” to fame as a public “motivational speaker” who has traveled the world to talk about her experience as a “pregnant man.”

“People say that you have to be a woman in order to give birth, but I am proving that this is not so — I am a fully legal male, and I gave birth,” “Thomas” told the Discovery Channel, which profiled her in a 2008 documentary.

“My pregnancy challenged the socially accepted definitions of ‘woman,’ ‘wife,’ and ‘mother;’ in other words, it’s a social issue, not a biological one. I was a man before I gave birth, I was a man during my pregnancy, and I am a man now.”

In February 2012, Tracy decided to go ahead with genital plastic surgery to give herself a more manly appearance below the waist, a procedure that was featured on CBS’s The Doctors.  Just one month later, she filed for a legal separation from Nancy, which Nancy quickly escalated to divorce proceedings.

But Judge Douglas Gerlach balked at the request, arguing that Tracy’s having given birth to the couple’s three children meant that regardless of legal status, she was biologically a woman, and Arizona did not at that time recognize same-sex “marriages.”  Therefore, Gerlach said, the Arizona courts lacked standing to adjudicate a divorce for a marriage it never considered valid in the first place.

To accept a childbearing woman as a man based only on the woman’s word, Gerlach argued, “would lead to circumstances in which a person's sex can become a matter of whim and not a matter of any reasonable, objective standard or policy, which is precisely the kind of absurd result the law abhors.”

But in August 2014, Gerlach was overruled by the Arizona Court of Appeals, which ruled that under Arizona law, a legal sex change need not render a transsexual person sterile.

“Thomas” Beatie has been released on her own recognizance.  The transsexual’s current girlfriend, Amber Nicholas, told KTVK the couple are hopeful that the judge will toss the stalking charge out.

“The only reason for Thomas using the GPS was to give us peace of mind when the children were with Nancy,” she wrote in an email to the station, adding that, “in no way did he [sic] believe he [sic] was doing anything illegal by wanting to protect his [sic] children and ensure that they were not taken from him [sic] or in danger in any way.”

But Nancy’s attorney, David Higgins, told the station his client hopes the discovery of the tracking device “puts an end” to her being “bullied, being harassed and now stalked by [Thomas].”