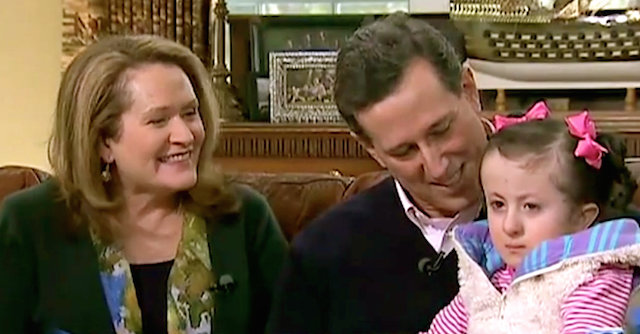 Fmr. Sen. Rick Santorum, with his wife and their daughter, Bella. Patriot Voices

MILWAUKEE, November 11, 2015 (LifeSiteNews) – The word “economy” comes from the Greek word “to manage a house.” And Rick Santorum warned at last night's debate that, if households are on the rocks, the economy will fail.

“The biggest problem in America today,” which is responsible for “the hollowing out of the middle of America,” is “the breakdown of the nuclear family,” Santorum said at the first of two debates hosted by Fox Business channel last night.

Promoting marriage is necessary so that children can be “raised in a two-parent family,” he said. Currently, 40 percent of American children are conceived outside wedlock, the highest level in American history.

“We'd better be the party that's out there talking about this issue and what we're going to do to help strengthen marriage and return dads into homes in all communities,” said Santorum, whose tax plan would greatly expand the child tax credit.

Focusing on family formation would benefit “the communities that are hurting the most. The ones you see the protests in – there are no dads,” he said. “And we need to do something about it.”

Social scientists have increasingly cited the intact family as a major factor in economic prosperity, individually and collectively.

A report written for the American Enterprise Institute found that “men and women who are currently married and were raised in an intact family” make $42,000 more than their single peers who were raised in a broken home.

While Santorum believes family breakdown is the problem, others believe inequality is a greater evil. Earlier this year, Professor Adam Swift of the University of Warwick told Australian media that “the family is this source of unfairness in society,” and “if we abolished the family, there would be a more level playing field.”