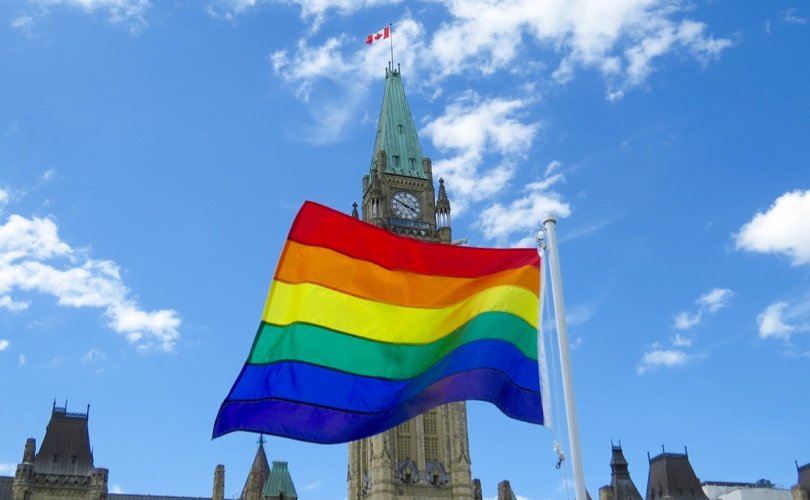 OTTAWA, June 2, 2016 (LifeSiteNews) — The homosexual rainbow flag was hoisted on Parliament grounds for the first time Wednesday as Liberal Prime Minister Justin Trudeau held an event to celebrate the month of June as World Pride Month. An exuberant Trudeau called the event a “great day for Canada,” adding that he and his government still “have more work to do in the coming years” to advance the “rights and protections” of homosexuals and trans-people across the country.

The Canadian Centre for Gender & Sexual Diversity had originally described the flag raising event to media in a press release as the “first time a flag other than the Canadian Flag and the Queen’s standard have flown from the Peace Tower on Parliament Hill” when in fact the flag was erected on a makeshift pole on Parliament grounds.

Prior to Trudeau taking the mic, openly gay MP Randy Boissonnault, Edmonton Centre, summarized the historical nature of the event.

“Today marks the next step in a long arc of inclusion that started in 1969 with then Prime Minister Pierre Elliot Trudeau and the decriminalization of homosexuality. And that continues to today with Prime Minister Justin Trudeau and this symbolic act and — two weeks ago — our introduction of legislation for [transgender bill] C-16, because, inclusion in a Trudeau government is a hallmark of our values and a hallmark of us as Canadians,” he said.

“Raising a homosexual flag on Parliament grounds displays the narrow, extremist, and exclusive viewpoint of the current Liberal government. The rainbow flag represents the views of an activist special interest group only.  To raise this flag is offensive to all Canadians who have knowledge and concern about Canada’s history, culture and traditions,” she added.

“It comes as no surprise that Trudeau and the Liberal government will do anything to grant special rights to appease the Gay lobby. That said, it is heartening to see Justin do something that will get him zero extra votes next election from Canadians who are deeply concerned about the direction he is taking our country,” he told LifeSiteNews.

The Bible describes the rainbow as being used by God as a sign of his everlasting covenant with mankind after he unleashed a great flood to punish men who had grown corrupt and evil. In the 1970s, homosexual activists hijacked this Christian symbol of God’s love and mercy and used it to represent their movement and its goal of attaining the full acceptance of homosexual sexual practices by everyone in society, practices that are expressly condemned throughout the Bible.

Openly gay man John McKellar has criticized the strategies used by activists to advance the homosexual cause through parades and flag raising events. The Toronto blogger in a post last week slammed the tactics as “rainbow narcissism and victimology.”