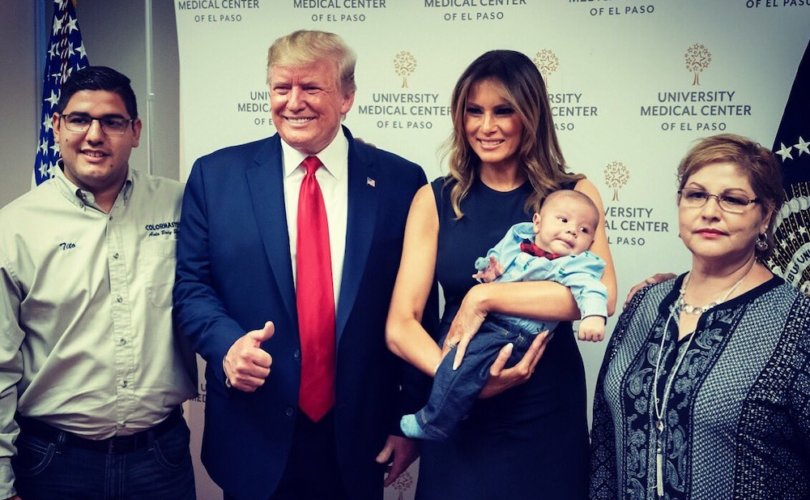 EL PASO, Texas, August 13, 2019 (LifeSiteNews) – The family of a couple killed protecting their baby in the deadly El Paso shooting says they’ve received death threats for taking a picture with President Donald Trump, but they refuse to wade into the political blame game.

Twenty-two people were killed and two dozen injured after 21-year-old Patrick Crusius opened fire inside an El Paso Walmart, apparently motivated by a range of ideological grievances including “racial and cultural replacement of the European people” as well as corporations “shamelessly over-harvesting resources.”

“Our hearts are shattered for every family whose parents, children, husbands, and wives were ripped from their arms and their lives,” Trump said in the wake of the shooting. “In one voice, our nation must condemn racism, bigotry, and white supremacy. These sinister ideologies must be defeated.”

Among the victims were Andre and Jordan Anchondo, who died shielding their two-month-old baby from harm.

“From the baby's injuries, they said that more than likely my sister was trying to shield him,” Jordan’s sister, Leta Jamrowski, said. “So when she got shot she was holding him and she fell on him, so that's why he broke some of his bones. So he pretty much lived because she gave her life.” Andre was in turn trying to shield his wife’s body.

On August 7, the president and First Lady Melania Trump visited the University Medical Center of El Paso to meet with victims and their families, including Andre’s brother, Tito Anchondo, which has sparked a backlash among left-wing activists and pundits who have tried to blame the shooting on Trump’s hard-line stance against illegal immigration.

I met many incredible people in Dayton, Ohio & El Paso, Texas yesterday. Their communities are strong and unbreakable. @potus and I stand with you! pic.twitter.com/SHzV6zcVKR

The president “was just there to give his condolences and he was just being a human being,” said Tito, the Houston Chronicle reported. “Is it that hard to try and understand that a family is trying to not be sad at a moment like this?”

He added that he has received death threats over a photo taken with the Trumps. “We should be coming together as a country at this time instead of threatening each other with hate messages,” Tito said.

He also said that he had “definitely” felt consoled by the conversation with the president, and that Andre had been “very supportive of Trump.”

Another relative of the slain couple, Vibora Anchondo, issued a stinging rebuke to two unnamed local politicians for warning Trump to stay out of El Paso.

“I cannot believe how these monsters are using the tragic event to push their political agenda,” she wrote on Facebook. “I lost my brother and sister-in-law on Saturday. My family and I are living a horrible nightmare. The visit from our President will be more than comforting to my family. He will not be here for a political agenda.”

Tito Anchondo has set up a GoFundMe to help with future expenses for the murdered couple’s baby and their two older children. As of Tuesday morning, it has raised more than $148,000.