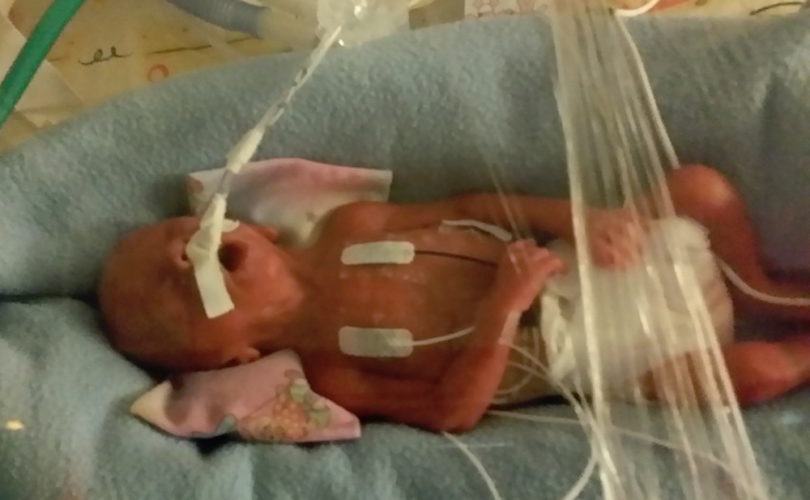 IOWA CITY, June 7, 2016 (LifeSiteNews) – Twin babies were born one week before abortion may be legally limited are fighting for life inside an Iowa hospital.

Although extremely premature, they are receiving treatment at the University of Iowa Hospital in Iowa City.

Two recent studies have found that as many as two-thirds of babies born at 22- or 23-weeks' gestation could survive if given medical treatment. The stunning findings have caused researchers to reconsider abortion law, since a 1992 Supreme Court case set 24 weeks as the date of viability, disallowing restrictions on abortion before that time.

One of the faculty at the University of Iowa, pediatrics professor Dr. Edward Bell, told the New York Times that he now considers 22 weeks to be the new limit for fetal viability.

The twins' parents, Jimmy and Ashley, are “a young couple just starting out, and the hardships ahead will be a true testament to their love and strength,” according to the twins' maternal grandmother, Wendy Kelly.

The couple has displayed tremendous affection for one another, and their children, before and after their premature entry into the world.

“Four months, 3 weeks, and 3 days ago Zeus,” their dog, “decided to eat your birth control,” Jimmy wrote in a Facebook message to Ashley on Mother's Day. “That was the best day of my life, because that's the day we made those two blessings you're carrying around.”

On May 31, Ashley became dilated and went to the hospital, where doctors administered injections designed to aid her babies, according to Jimmy. She was able to hold off going into labor until last Thursday.

“We are going through this with confidence and faith that we will be bringing home two healthy baby boys when it's all said and done!” Jimmy wrote.

That's when Kelly opened a GoFundMe with the goal of raising $10,000 to defer their expenses. As of their writing, 29 contributors had donated $1,730.

“We are so very grateful for all the help, it literally had me almost in tears. (And I don't cry),” Jimmy wrote.

He then shared a video of one of the two babies. Wrennyn was sleeping, he said.

The family is thankful for the outpouring of support for babies who could survive, although they are at a stage in which they are not protected by law.

“Day 1 of our campaign we couldn't ask for a more positive response,” Wendy Kelly wrote. “With the exception of a short lived problem with little wren's lung losing air yesterday both boys are still lil' troopers,” the family wrote. “Every new day is another WIN!”

New standard of viability? Many babies born at 22 weeks can survive with treatment, study finds