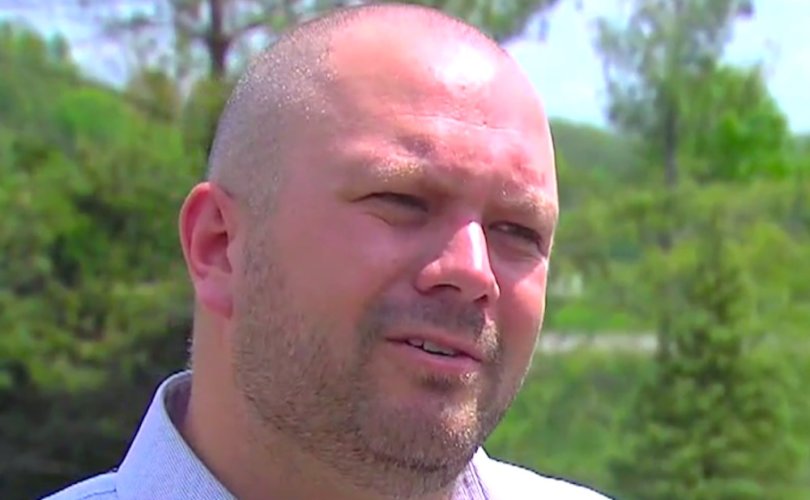 'We decided we were not going to force our children to make the decision between confusion, humiliation, and embarrassment,' says Matt Stewart.

HOWELL, Michigan, June 3, 2016 (LifeSiteNews) — The father of three sons has decided to take them out of public school because of a new policy allowing girls who identify as transgender to use the boys' bathroom at school.

Matt Stewart told WXYZ-TV that his son, a student at Southwest Elementary School in Howell, Michigan, returned home one day and informed him that “there was a girl in the bathroom with him and the other kids.”  Stewart consulted his wife, and they decided to keep their impressionable children at home.

“We decided we were not going to force our children to make the decision between confusion, humiliation, and embarrassment,” Stewart said.

The Howell School District says President Obama is forcing them to allow the opposite sex in the bathrooms, locker rooms and showers.  District leaders wrote an explanatory letter to all school parents, stating, “The United States Department of Justice and Department of Education…found that Title IX prohibits discrimination against students based on their transgender status.”

The Obama Administration announced that all public schools in the nation must allow males who identify as females to use the girls' intimate facilities and vice-versa, or else lose millions in federal funding.

Texas Lt. Gov. Dan Patrick even predicted the Obama transgender mandate “will be the end of public education,” and vowed that his state would rather lose federal funding than endanger its school children.

It is expected that the Supreme Court will ultimately take up the issue.

Radio personality and father of three Eric Nichols told LifeSiteNews, “I have grave concern over the acceptance in society for a policy that just a few years ago would have been deemed a very dangerous experiment imposed on society.”

“Certainly, there will be many negative ramifications from this misguided policy, some of which are unforeseeable,” Nichols continued.  “We have chosen to homeschool our three children due in part to directives and policies from President Obama such as this.”

Howell Superintendent Erin MacGregor told the Livingston County Daily that his district may hold a public forum or some other means of getting “feedback from the community to inform the board” as they seek to apply the Obama transgender mandate.

The next Howell school board meeting is scheduled for June 13.