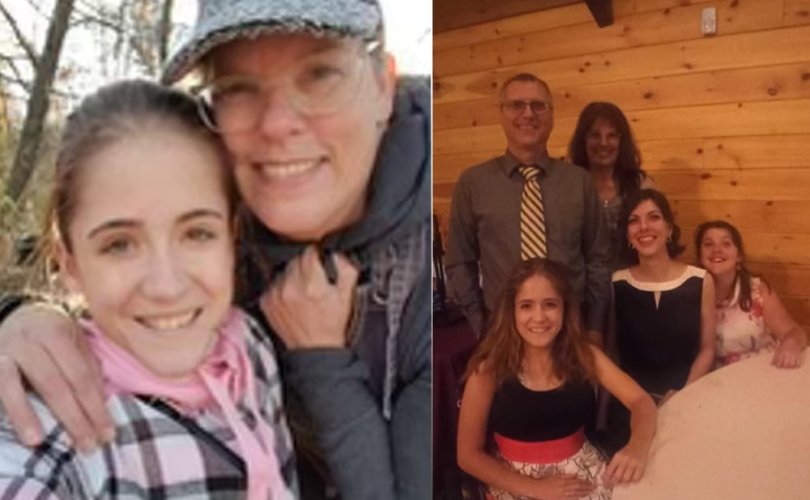 An earlier version of this article incorrectly stated that We The Patriots USA co-founder Brian Festa was representing the Campaus in their intended legal action. The family is actually being represented by law firm Pattis and Smith of New Haven, Connecticut, in partnership with local counsel Jimmy Thomas of Michigan. We The Patriots USA helped connect the Campaus to their outside legal counsel. The article has been updated accordingly.

GRAND RAPIDS, Michigan (LifeSiteNews) — A Michigan family plans to take legal action against a hospital for allegedly refusing to put their adopted Ukrainian daughter on the wait list for a kidney transplant because she hasn’t gotten the experimental COVID-19 shots.

Diagnosed with renal failure, their adopted daughter is on twice-a-week dialysis treatments to keep her single remaining kidney functioning, making getting a transplant a matter of urgency.

However, hospital officials at Spectrum Health Helen DeVos Children’s Hospital in Grand Rapids are reportedly preventing the girl from getting on the wait list for a transplant because she won’t get the required COVID-19 jab due to religious objections.

The Campaus are now seeking legal action against the hospital with the help of nonprofit organization We The Patriots USA, which connected the family with outside legal counsel. Campau and her daughter are being represented by Pattis and Smith of New Haven, Connecticut, in partnership with local counsel Jimmy Thomas of Michigan.

Don’t miss this interview with WTPUSA cofounder & attorney Brian Festa & the mother of a 17-year old girl being DENIED A KIDNEY TRANSPLANT b/c she will not take the covid shot.

Jenna Campau told LifeSiteNews in a phone interview Tuesday that the months-long effort to get her daughter on the wait list for a transplant is nearing a crucial deadline.

Campau said the pediatric list has a wait time averaging nine months to a year, and the adult list could leave patients waiting three to six years for a transplant.

The Campau family’s battle with the hospital began last year, shortly after they adopted their daughter from an orphanage in Ukraine.

Originally believing they would be able to get their teenage daughter the necessary treatment, the family was blindsided when the hospitals they had reached out to updated their requirements after the new year to require all transplant applicants to get injected with the experimental COVID shots.

According to Campau, the only hospital that wasn’t requiring the jab was out of the question because it was over 500 miles away and the family would need to be at the hospital within five hours once a kidney became available.

Moving forward with Helen DeVos Children’s Hospital, the Campau family applied for the wait list but have refused to get their daughter jabbed with the drug citing religious objections.

According to Campau, the hospital not only declined to put her daughter on the wait list unless she got the experimental drug, but staff even reported the family to Child Protective Services (CPS) on April 11.

However, Campau told LifeSite that four days later CPS said it would not open a case against the family due to the religious component of their objection to the injections, a decision she described as “a huge burden off of our minds.”

“So we were very thankful for that, but of course, we’re still dealing with the hospital dragging their feet,” she said.

RELATED: Family wages legal battle with state to keep their children after giving them ivermectin to treat COVID

Campau said We the Patriots USA is working to raise funds to pursue legal action against the hospital to get the necessary treatment for the teenager, whom Campau described as “a remarkable young lady.”

According to a fundraiser page set up on the organization’s website, the group “is prepared to take on the hospital and CPS in court to save this child’s life and keep her with her family.”

Meanwhile, the family is already taking the first steps toward legal challenge as their crucial deadline approaches.

“A letter has been sent by our attorney to the hospital,” Campau said, adding that hospital administrators “are very much aware that we are looking at litigation.”

According to Campau, however, the hospital has refrained from communicating directly with the family with regard to the potential legal action.

“I’m sure they’re following their own legal counsel and being as quiet as possible,” she said.

LifeSiteNews reached out to Helen DeVos Children’s Hospital for comment but has yet to hear back.

For Campau, legal action and activism aren’t the only paths to rectifying the situation. The homeschooling mom, who was driven to adopt her children from Ukraine through her reading of the scriptures and desire to help widows and orphans, emphasized the importance of prayer for both healing and for courage.

“We love the Lord and we love the Word, cover to cover,” she told LifeSite. Urging people to become educated about the pressure placed on religious people seeking medical care to go against their firmly-held beliefs to obtain treatment, Campau also asked for prayers for her family and other families facing similar situations.