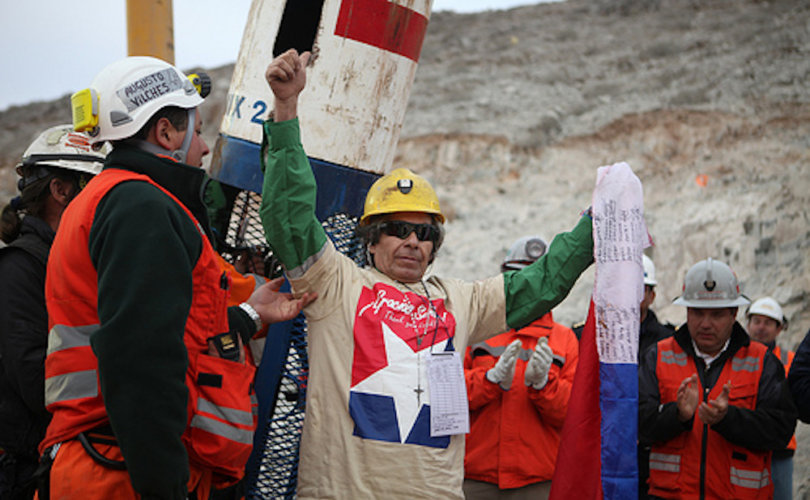 Chilean miners rejoice after their rescue in 2010. HUGO INFANTE/GOVERNMENT OF CHILE

CHILE, October 12, 2016 (LifeSiteNews) — Six years ago on October 13, 2010, the world rejoiced as 33 Chilean miners, trapped underground for 69 days, were successfully rescued. An estimated billion people around the world watched the miraculous escape.

Today, in an open letter, a number of these same miners thanked the Chilean people for not abandoning them trapped 700 meters under the earth, for investing the human resources needed for their seemingly hopeless rescue, and for believing in the value of life, and concretely in their lives.

They thanked God that “the impossible was achieved” and for allowing them, figuratively, to be “born again” from the womb of “Mother Earth.”

Their letter goes on to ask that the same solidarity and respect for life in the heart of the Chilean people continue to preserve and protect the right to life of those who “have no voice,” those who “cry out in silence.”

“As Chileans we do not accept laws that do not respect human life … we say a strong 'No' to the abortion law.”

The letter was published today in El Mercurio, one of the nation's most important newspapers.

The miners were reacting to President Michelle Bachelet's legislative proposal, which is backed by members of her government coalition of Socialist, Communist and Christian Democrat parties. The measure passed the House of Deputies earlier this year, and is now being considered in the Senate.

The measure calls for legalizing abortion of babies who are conceived in rape, who may suffer from a condition “incompatible with life,” or who could present a risk to the lives of their mothers.

Chile has had no legal abortion for decades, protecting both mother and unborn child equally in law. The country has had the lowest maternal mortality rates in all of Latin America, and rivals that of the United States, a country with far more medical and other resources.

In 2011, the people of Chile were presented with the International Protect Life Award by a coalition of NGO leaders active at the United Nations. The coalition, in recognizing Chile as a model country, cited her exemplary legal protection and other public policies relating to the right to life, as well as the country's low maternal mortality rates.

Chile has been targeted by international pro-abortion organizations such as Amnesty International. Elizabeth Bunster, coordinator of Chile's pro-life coalition, Chile es Vida, says, “They don't leave us alone. It is troubling that there is so much interference by these international groups. They have lots of money and they use it to push their anti-life agenda.”