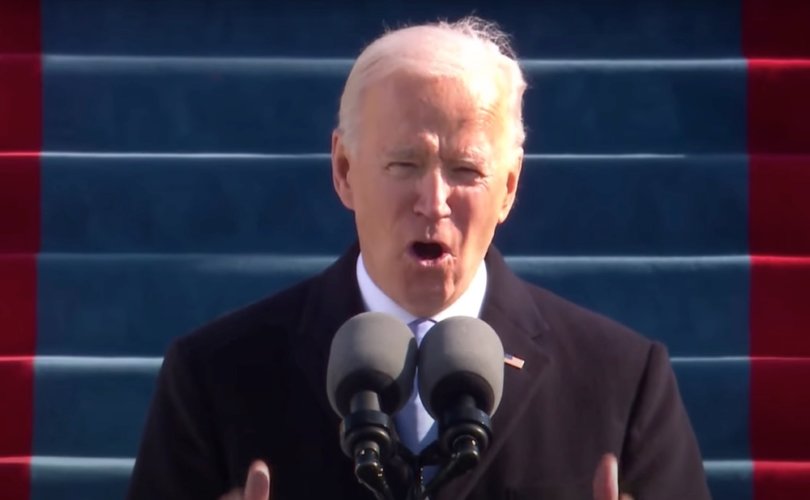 WASHINGTON D.C, January 20, 2021 (LifeSiteNews) – After being sworn in today as the 46th president of the United States, Joe Biden gave an inaugural speech in which he urged Americans to fight “political extremism, white supremacy, and domestic terrorism,”while hammering a call for unity.

Biden opened his speech celebrating the triumph of “democracy”: “This is Democracy’s day. We have learned again that democracy is precious, democracy is fragile, and at this hour, my friends, democracy has prevailed,” Biden said.

“So now on this hallowed ground where just a few days ago, violence sought to shake the Capitol’s very foundations, we come together as one nation under God, indivisible, to carry out the peaceful transfer of power as we have for more than two centuries.”

“And over the centuries we've come so far. But we still have far to go. We’ll press forward with speed and urgency for we have much to do in this winter of peril and significant possibilities,” he continued.

Biden bemoaned “a once-in-a-century virus that silently stalks the country” that “has taken as many lives in one year as America lost in all of World War II,” as well as “millions of jobs” lost and “hundreds of thousands of businesses closed.”

He went on to list the challenges that the country must meet, in his view: “A cry for racial justice, some four hundred years in the making, moves us.”

“A cry for survival comes from the planet itself. A cry that can’t be any more desperate or any more clear,” he continued. “And now, a rise of political extremism, white supremacy, domestic terrorism, that we must confront and we will defeat.”

Biden labeled Trump supporters who gathered at the Capitol on January 6, the vast majority of whom were peaceful, as “domestic terrorists” in a tweet on January 7.

Later in his speech, Biden referred to the “riotous mob” who “thought they could use violence to silence the will of the people, to stop the work of our democracy, to drive us from this sacred ground.”

“To overcome these challenges, to restore the soul and secure the future of America requires so much more than words, requires the most elusive of all things in a democracy. Unity.”

“I know speaking of unity can sound to some like a foolish fantasy these days. I know the forces that divide us are deep and they are real. But I also know they are not new,” Biden continued.

“Our history has been a constant struggle between the American ideal that we are all created equal and the harsh ugly reality of racism, nativism, fear, demonization, have long torn us apart. The battle is perennial. And victory is never assured.”

“We can see each other not as adversaries but as neighbors. We can join forces, stop the shouting and lower the temperature, for without unity, there is no peace, only bitterness and fury.”

“Many centuries ago, St. Augustine – the saint of my church – wrote that a people was a multitude defined by the common objects of their love. What are the common objects we as Americans love, that define us as Americans? I think we know. Opportunity, security, liberty, dignity, respect, honor, and yes, the truth.”

While Biden frequently touts his supposed Catholic faith, as well as his friendship with Pope Francis, the new U.S. president has made the promotion of abortion, contraception and LGBT issues a crucial part of his agenda, just as it was in the Obama administration when Biden held the role of vice-president.

Biden continued by calling for a rejection of “the culture in which facts themselves are manipulated and even manufactured.”

“Recent weeks and months have taught us a painful lesson. There is truth and there are lies. Lies told for power and for profit,” he said.

Biden continued, saying that our leaders are not just “pledged to honour our Constitution, to protect our nation,” but also “to defend the truth and defeat the lies.”

“My fellow Americans, in the work ahead of us we're going to need each other. We need all our strength to persevere through this dark winter. We're entering what may be the darkest and deadliest period of the virus,” he continued.

“We must set aside politics and finally face this pandemic as one nation, one nation. And I promise this, as the Bible says, 'Weeping may endure for a night, joy cometh in the morning'. We will get through this together. Together,” Biden said.

Despite Biden’s celebration of what he has declared to be a triumph of Democracy in this Presidential election, many prominent conservatives have contested the legitimacy of the election.

China expert Steve Mosher has affirmed the conclusion that the election was illegitimate, saying, “Biden will be president for the next four years, but everyone in D.C. knows who really won the election.”

“On Election Night, the Democrats had to resort to massive fraud in a half-dozen key swing states. If you doubt this, you need to read Peter Navarro’s brilliant account in three volumes,” said Mosher.

“No one believes that, thanks to a massive infusion of votes arriving at 4 A.M., Biden received the most votes of any candidate in history. But, whether because of cowardice or death threats, the fraud has been allowed to stand.”