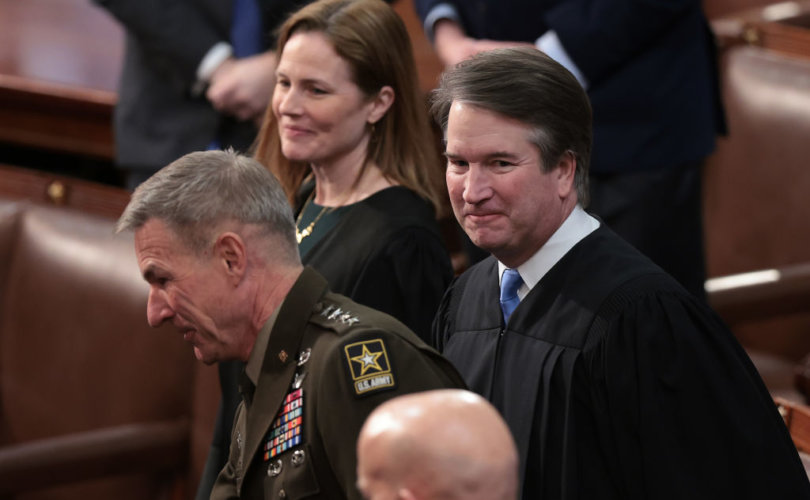 WASHINGTON, D.C. (LifeSiteNews) – A radical far-left group has put a $50 bounty out for the names of restaurants where conservative Supreme Court justices are having dinner.

The bounty goes up to $200 dollars if the justices are still at the restaurant half an hour after the initial tip. This follows harassment at a Washington D.C. steakhouse last Wednesday that forced Justice Brett Kavanaugh to flee to safety after a tweet revealed his location.

The organization, ShutDownDC, posted the bounty on Twitter last Friday. The tweet, directed to Washington D.C. service workers, reads, “If you see Kavanaugh, Alito, Thomas, Gorsuch, Coney Barrett or Roberts [direct message] us with the details! We’ll venmo you $50 for a confirmed sighting and $200 if they’re still there 30 mins after your message.”

The tweet featured a Politico story by David Lippman about Kavanaugh’s flight from Morton’s Steakhouse last week after ShutDownDC posted that the justice was having dinner there.

DC Service Industry Workers… If you see Kavanaugh, Alito, Thomas, Gorsuch, Coney Barrett or Roberts DM us with the details!

We’ll venmo you $50 for a confirmed sighting and $200 if they’re still there 30 mins after your message. https://t.co/xXWZ5JZiE7

Twitter policy prohibits calls to harass or abuse people offline. “We prohibit behavior that encourages others to harass or target specific individuals or groups with abusive behavior,” the platform’s policy on abusive behavior states. “This includes, but is not limited to; calls to target people with abuse or harassment online and behavior that urges offline action such as physical harassment.” Twitter has yet to remove the tweet as of the time of this writing.

READ: The pro-abortion dissent in Dobbs was utterly weak, unclear, and unpersuasive

ShutDownDC also claimed that Friday was their best day for donations, pointing to a tweet by Fox News’ Tucker Carlson.

The tweet, posted late Friday, read “Whoa thanks Tucker (sic). We have gotten more donations than any single day yet. KEEP THEM COMING!” Carlson tweeted about the organization earlier that evening, saying “Antifa activists @ShutDown_DC are trying to harass Supreme Court Justices. Everyone should flood their account until they give up.”

Last month, a socialist subreddit posted the addresses of the justices who voted to overturn Roe. Included in the subreddit were discussions on how to hunt down the justices at their churches and send dangerous substances to them. The subreddit was removed after 22 hours. On TikTok, someone posted a picture of Justice Clarence Thomas, his address, and the ingredients for a pipe bomb.

Protests and violence broke out in May after a leaked majority opinion of the Court in Dobbs v. Jackson Women’s Health Organization revealed that the Court might overturn Roe.

Last month, a man attempted to assassinate Kavanaugh at his home. That night, protests broke out in the street in front of his house. The man, Nicholas John Roske, said that he attempted to kill Kavanaugh because of his potential role in Roe’s reversal.

Last month, the Department of Homeland Security (DHS) released a brief that stated violence against pro-life organizations could continue “for weeks” after the Dobbs ruling.