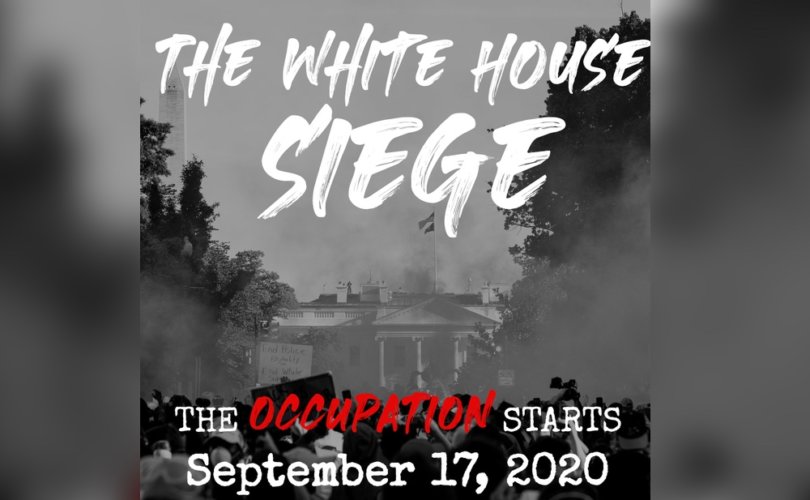 WASHINGTON, D.C., August 13, 2020 (LifeSiteNews) – The little-known foreign organization which helped incite the “Occupy Wall Street” movement and its imitators in big cities across the U.S. a decade ago is now declaring war on the Trump Administration, capitalism, and the American electoral process as it invites agitators to D.C. to “lay siege to the White House” for 50 days before Election Day.

It is clear that the subversives behind this planned assault on the nation’s capital want Democrats Joe Biden and Kamala Harris to win.

They seek to “inspire a global movement of systemic change – a Global Spring – a cultural heave towards a new world order.”

Recruiting for a ‘revolution’

Hoping to tap into the ongoing roiling turmoil of Black Lives Matters (BLM) protests and Antifa destruction in many American cities over the last few months, Adbusters, a non-profit Canadian organization which calls itself “a global network of activists[,] writers[,] artists[,] designers[,] hackers[,] tricksters[,] poets[,] philosophers[,] and punks,” has begun publicizing its plans and offering “Tactical Briefings” via social media.

“On September 17, 2020 we will lay siege to The White House for exactly fifty days,” announces Adbusters’ July 28 Tweet, pinned at the top of the group’s Twitter page.  “We need your wisdom and expertise to pull off a radically democratic toneshift in our politics.”

“Are you ready for #revolution?” they ask. “This is the #WhiteHouseSiege.”

On September 17, 2020 we will lay siege to The @WhiteHouse for exactly fifty days.

We need your wisdom and expertise to pull off a radically democratic toneshift in our politics.

Are you ready for #revolution?

A subsequent Adbusters tweet says, “Here’s hoping for [a] #revolution,” over an edgy dystopian meme:

Previously, Adbusters had declared that they seek to bring together those “who want to advance the new socialist activist movement of the information age. Our aim is to topple existing power structures and forge a major shift in the way we will live in the 21st century.”

“This toppling, it seems, entails a lot of extreme, foul behavior,” I observed in 2011 after having gone undercover with the “Occupy” movement for a few days.

If the planned White House “siege” is anything like the “Occupy” movement’s takeover of public spaces nine years ago, Americans can expect the same sort of ugliness recently witnessed in Seattle’s police-free CHOP/CHAZ zone, and much more.

By any measurement of objective truth, this “movement” is appalling.  What is more appalling is this: adult progressives ––politicos, pundits, self-interested activists, and activist organizations–– are inhumanely manipulating these poor clueless kids who are experiencing degradation all for the sake of a flawed, failing ideology.

Through Occupy Wall Street, liberal elites reveal who they are deep down inside and how they would behave if they themselves were free to cast aside all societal restraint.  Their unwavering support and cheerleading for the Occupiers prove that they are comfortable with some level of both anarchy and tyranny if either will bring about their impossible utopian vision for the United States of America.  Many seem to be longing for a “Kent State” or “Tiananmen Square” moment to win public sympathy and spark the revolution.

The big story concerning Occupy Wall Street was not about the protesters. It was about the politicians, media, pundits, public- and private-sector unions, and other liberal elites whose ideological contempt breathed life into the movement.

The same is true today. The same liberal elites – whose numbers and influence have swelled since then via the growth of Big Tech and as others have ascended the corporate ladder in the country’s biggest companies – are likely to support the planned White House “siege” from behind the scenes in order to influence the 2020 Presidential and Senatorial elections.

Amazon is already seeking to profit from the planned event, promoting “The White House Siege” tee shirts on its website.

What’s more, the Democrat Party is now steered by its radical socialist base, and will likely be cheering from the sidelines if the planned “siege” takes place.

“The group’s website boasts an updated twist to the messaging, branding, and PR of a standard Marxist cultural revolution,” noted PJ Media’s Kari Donovan, “this one meant to destroy the foundations of the American Republic with the assistance of the other domestic terrorists and participants of the Black Lives Matter movement.”

“A siege only works if it is sustained. We witnessed this — the multiplying power of a strategic occupation — nine years ago. You dig in, hold your ground, and the tension accumulates, amplifies, goes global,” states Adbusters’ Tactical briefing #1.

“Fifty days — September 17th to November 3rd,” it continues. “Let us once again summon the sweet, revolutionary nonviolence that was our calling card in Zuccotti Park.”

“White House Siege will electrify the U.S. election season — and it doesn’t stop there…Drawing wind from Me Too, BLM, Extinction Rebellion, and protests against Trump’s lethal bungling of coronavirus, we’ll inspire a global movement of systemic change — a Global Spring — a cultural heave towards a new world order.”