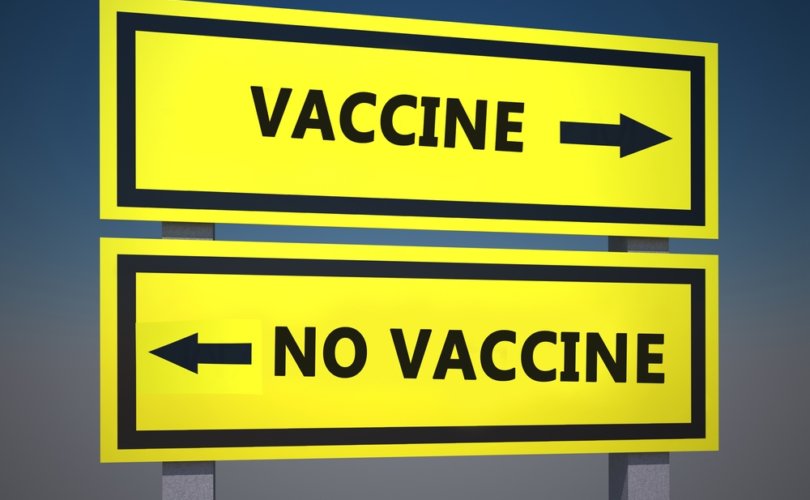 SAN FRANCISCO, CA, February 15, 2021 (LifeSiteNews) — The CEO of an internet watchdog focused on monitoring conversations about COVID-19 has called on Big Tech de-platform and deny service to those who are critical of COVID-19 vaccines.

“Big Tech needs to make a decision, now that we expose the intent, the tactics and the deadly impact of the anti-vaxx industry, and the ways in which social media platforms have become integral to their success,” Ahmed told Jay. “Facebook, Instagram, Twitter and Google can stop this now. They could stop providing services to people whose business is in enabling the spread of disease and death.”

Ahmed claimed that “anything less than the dismantling of these individuals’ profiles, pages and groups and permanent denial of service” would be “willing acquiescence” on the part of the Big Tech with the so-called “anti-vaxx industry.”

CHT, which organized the event, lists among its lead supporters the George Soros-founded Open Society Foundations among a host of international organizations working for societal change.

Jay, who led the interview, is an “asexual activist” and the founder of an online community for those who identify as “asexual.”

The CCDH simply states that the organization is “funded by philanthropic trusts.” An August 2020 Off Guardian article notes that as a Non Governmental Organization registered in the U.K. “the CCDH are exempt from audit and can thus keep their finances largely secret.” Ahmed, who has held a number of position in the U.K.’s Labour Party, last year described “anti-vaxxers” as “an extremist group that pose a national security risk.”

Both Ahmed and Jay say that leading critics of vaccines are, in fact, “an industry” dedicated to “sowing doubt” for profit.

The CHT interviewer invoked the specter of racism by saying that that vaccine skeptics pose “terrifying risks to public health, especially public health in communities of color and other communities that are deeply vulnerable to Covid-19.”

Jay said that social media is designed to show people information that will “generate as much engagement as possible” and that “conspiracy theories” are among the content that performs best. He then expressed a conspiracy theory of his own: that leading critics of vaccines are deliberately manipulating algorithms for profit.

“That has led to the emergence of actors who have built business models around the gaming of that algorithm,” he stated.

“They make money by convincing people not to trust in scientifically validated public health measures and instead ask them to trust in non-scientific ways of thinking about disease.”

Jay was never clear about how such “actors” usually make their money, although later Ahmed did mention an online conference held by the National Vaccine Information Centre which charged participants $80 to attend.

Ahmed said that these “actors” understand “instinctively” and “technically” how to “game algorithms” and also that their message is just the “fruit, the fleshy exterior that makes you want to dig in.”

“What they’re really trying to sow is the seed of doubt,” he stated.

He called it a “battle of authorities” which pitted organized authorities like “Her Majesty’s Government’s Health Service” against those with “special knowledge that only you can get from them — of course, for a fee.”

“Because these are highly monetized and highly productive actors,” he said.

These “actors” were not named during the meeting, which was mostly a repetitive exchange of remarks about vaccine skeptics and their alleged message that COVID-19 is not dangerous, that vaccines are dangerous, and doctors can’t be trusted. Ahmed recommended that their opponents should stress that COVID is dangerous, praise the vaccine, and shore up doctors’ status.

“Everyone loves doctors,” he exclaimed.

Ahmed spoke briefly about the original mission of the Center for Digital Hate, which was working against movements spreading misinformation to encourage identity-based hate.

In 2020, the CCDH’s focus moved from concerns about hate groups to monitoring conversations about the coronavirus. In December it produced a booklet entitled The Anti-Vaxx Playbook. In the Introduction, Ahmed states that bad actors on the internet have created “a Digital Counter Enlightenment.”

Digital spaces have been colonised and their unique dynamics exploited by fringe movements that instrumentalise hate and misinformation. These movements are opportunistic, agile and confident in exerting influence and persuading people.

Over time these actors, advocating diverse causes – from anti-feminism to ethnic nationalism to denial of scientific consensus – have formed a Digital Counter Enlightenment. Their trolling, disinformation and skilled advocacy of their causes has resocialised the offline world for the worse.

The CCDH’s “work combines both analysis and active disruption of these networks,” he says.

“CCDH's solutions seek to increase the economic, political and social costs of all parts of the infrastructure – the actors, systems and culture – that support, and often profit from hate and misinformation.”

The document also refers to the most popular antivaxx (or vaccine critical) voices as “super-spreaders.” One of its primary messages to Big Tech is that “deplatforming works” to stop vaccine critical voices from expressing their doubts to others.

“It was a bit like James Bond infiltrating SPECTRE,” Ahmed said although the conference was open to the public.

The Antivaxx Playbook describes these and others who are concerned about the dangers of vaccines with the epithet “anti-vaxxers” throughout. It uses emotive language, as did Ahmed throughout his meeting with Jay.

The two men were a study in contrasts. The Californian Jay, in a t-shirt, began the meeting with a minute of meditative silence, ringing a bell to indicate the beginning and the end. Ahmed, a Cambridge University graduate in a suit and tie, referred to “blackguards” and spoke apologetically about having taken a Greyhound bus as if doing so were a social solecism. He also insinuated that he became infected with COVID-19 last February at a Klu Klux Klan rally he observed in Portland, saying his team had told him afterwards that such extremists deliberately catch COVID-19 and cough on “target audiences.” He offered no evidence that this is, in fact, how he caught the virus.

Ahmed, a graduate of Cambridge University, referred to the British vaccines as a “great hope”, their discovery “a Herculean achievement” and the governance of the British Government, with evident admiration, “swashbuckling.” But he said that these efforts, and any debate about how best to mitigate the pandemic, have been “undermined” by “misinformation.” He compared the vaccine skeptics at the NVIC to “mid-level marketers” and their missions to “a sales industry”.

Jay (who is white) emphasized his belief that vaccine skeptics, whom he described as “wealthy white people”, were targeting people of color. Ahmed repeated his booklet’s admonitions to Big Tech to deplatform vaccine skeptics, saying that trust in social media is the biggest driver in leading people to distrust vaccines.

Big Tech’s platforms, Ahmed said, “have failed to do their bit against the ‘parallel pandemic’” of vaccine skepticism.

This January, NVIC president Barbara Loe Fisher responded to the CCDH’s booklet with a video statement.

“It contains false and misleading information about the Fifth International Public Conference on Vaccination, which was sponsored by the 39-year old U.S. educational charity the National Vaccine Information Center, and held online in October 2020,” she said.

“Promotion of the CCDH report resulted in the spreading of fake news and misinformation by mainline media outlets in Great Britain and the U.S.”

Fisher decried both the CCDH’s demonization of those who question the safety of vaccines as “malignant actors” and its attempts to silence debate. She also stressed that NVIC is a not-for-profit organization with deeply personal motivations: their vaccine- injured children

“Our not-for-profit charitable organization was established for one reason: we were mothers and fathers of children brain injured by the highly reactive pertussis vaccine in the DPT shot and we wanted a safer pertussis vaccine to replace the one that had hurt our children,” Fisher said.

“That goal was accomplished after 14 years of consumer advocacy when a less reactive acellular pertussis (DTaP) vaccine was licensed for babies in the U.S. in 1996,” she continued.

“We also wanted parents to have access to accurate and full information about the risks and complications of both diseases and vaccines before children are vaccinated, so parents and paediatricians could work together to identify those children who are more susceptible to vaccine reactions and protect their health.”