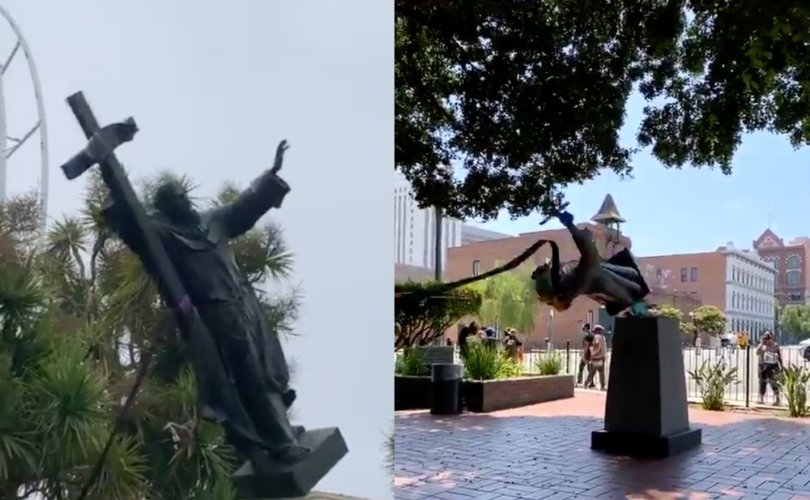 CALIFORNIA, June 22, 2020 (LifeSiteNews) – Protestors have pulled down and desecrated statues of Catholic missionary St. Junipero Serra in both San Francisco and Los Angeles, with others calling for the removal of another of his statues outside of Ventura City Hall.

Serra, a Spanish Franciscan missionary to the United States, helped to found nine missions in California in the late eighteenth century. Pope Francis canonized him in 2015.

Last week the Los Angeles Times reported that Ventura Mayor Matt LaVere, along with representatives from the Barbareño/Venureño Band of Mission Indians and Father Tom Elewaut, a Catholic priest based at the San Buenaventura Mission in Ventura, had issued a joint statement saying they believe the time has come to remove the statue from outside Ventura City Hall and have it “moved to a more appropriate non-public location.”

In 2013, upon being assigned to that mission, Father Elewaut told parishioners who had been attending the Traditional Latin Mass there for 15 years that he would no longer allow that rite of the Mass and they would need to find another parish.

On Saturday in Olvera Street, Los Angeles, 100 people reportedly helped to topple a statue of Serra with ropes. In a video of the incident, one participant can be heard saying “this is for our ancestors” as the statue came crashing down.

Natives just tore down the statue of Junipero Serra at Placita Olvera in solidarity with #BLMprotest #antiracism #antislavery pic.twitter.com/8ZDdv7vej7

“The demonstration was referred to as an ‘unmonumenting and cleansing of space’ done in partnership with the Tataviam and Tongva Tribal Nations, according to a statement from members of Los Angeles’s Native/Indigenous community,” Los Angeles Daily News reports.

“The act was described as ‘a step forward in returning balance to these lands,’” the report continues.

“No police intervened as this was a ceremony,” Joel Garcia, a witness who helped author the statement on behalf of the Tataviam and Tongva Tribal Nations, told the local newspaper.

“We had some elders share songs at the start and we collectively built an altar following the removal,” Garcia said.

The statue of Junipero Serra came down quickly and without any resistance from law enforcement. @LATACO pic.twitter.com/C0CyoLuYeI

And in Golden Gate Park, San Francisco, activists pulled down another statue of Serra. A video of the incident shows those in attendance cheering as the statue is toppled. One person can be seen hitting the statue with their fists and another person hitting it with a skateboard once it has fallen to the ground.

In response to the toppling of Serra’s statue in San Francisco, Archbishop of San Francisco Salvatore Cordileone said in a statement that a “renewed national movement to heal memories and correct the injustices of racism and police brutality in our country has been hijacked by some into a movement of violence, looting and vandalism.”

“The memorialization of historic figures merits an honest and fair discussion as to how and to whom such honor should be given. But here, there was no such rational discussion; it was mob rule, a troubling phenomenon that seems to be repeating itself throughout the country,” Cordileone said.

Voices in favor of the destruction of Serra’s statue have accused him of having committed numerous crimes, including genocide and the enslavement and torture of indigenous peoples.

But Cordileone insisted that Serra was a champion and protector of indigenous people.

The Embassy of Spain in the U.S. issued a statement on Saturday expressing their deep regret for the destruction of Serra’s statue in San Francisco.

“We deeply regret the destruction of the statue of Saint Junípero Serra in San Francisco today and would like to offer a reminder of his great efforts in support of indigenous communities,” they stated.

“It is also with great regret that we receive the news of the damages inflicted upon the bust of Miguel de Cervantes, who was himself held as a slave in Algiers for 5 years, and whose literature serves as a call for freedom and equality. Defending the Spanish legacy in the US is a priority of our foreign policy in this country, and we will continue to do so by intensifying our educational efforts in order for the reality of our shared history to be better known and understood,” the statement continued.

“We are also expressing our deep concern regarding these attacks to federal, state, and local authorities, asking that the memory of our rich shared history be protected, always with the utmost respect for the debates currently taking place,” the embassy concluded.

As of press time, LifeSiteNews was unable to find a public statement from the United States Conference of Catholic Bishops (USCCB) on the statues’ desecrations.

St. Junipero Serra “was the embodiment of ‘a Church which goes forth,’ a Church which sets out to bring everywhere the reconciling tenderness of God,” Pope Francis said when he canonized him. The pontiff has also called the saint “one of the founding fathers of the United States, a saintly example of the Church’s universality[,] and special patron of the Hispanic people of the country.”