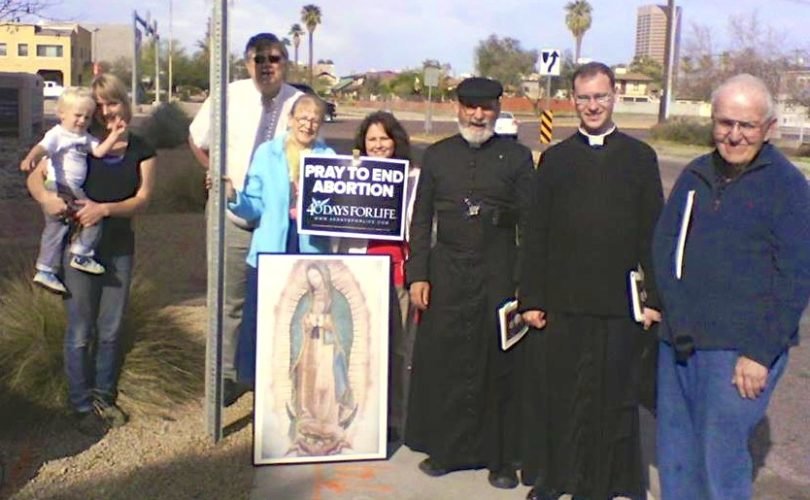 Father Kenneth Walker (priest on right) witnesses to life with other pro-lifers in Phoenix.Courtesy of 40 Days for Life Phoenix

Police allege that on June 11 Gary Michael Moran, 54, broke into the rectory of the Mater Misericordiae (Mother of Mercy) Mission in an attempted burglary and attacked Terra with a metal pipe.

According to court records, they say Terra tried to defend himself with a handgun, but Moran wrestled the gun away from the wounded priest and then shot and killed Walker who had come to Terra’s aid.

Father Terra, 56, was able to call 911 after the attack administer last rites to Walker despite his injuries.

Police investigators believe that the assailant stole a car from Mater Misericordiae Mission, which was found nearby, but were unable to locate the suspected killer until receiving a tip that someone had heard Moran bragging about the incident.

Moran is charged with first-degree murder, aggravated assault, burglary, kidnapping, armed robbery, misconduct involving weapons and unlawful means of transport. He is scheduled for another appearance in Maricopa County Superior Court on Sept. 2, 2014.

Both Walker and Terra are members of the Priestly Fraternity of Saint Peter (FSSP), an order dedicated to celebrating the Latin Mass, commonly called the Tridentine rite.

At the June 17 Requiem Mass celebrated for Father Walker at St. Catherine of Siena Catholic Church in Phoenix, Father Eric Flood, the North American District Superior of the FSSP, posed a question to the people who came to mourn and remember the young man who had been a priest for only two years.

“What would Father Walker say to his attacker today?” asked Father Flood, according to the Arizona Republic. “He would say, 'Turn to God. Grow in friendship with him.’ He would tell the suspect that heaven is still possible.”

“Some of us might not be so quick to think that. But Father Walker would say, 'There was once a bad thief to the right of our Lord. And (Jesus) looked at him and said, 'Today, you will be with me in Paradise.' “

Phoenix bishop: Murdered priest was praying outside abortion clinic each time I went