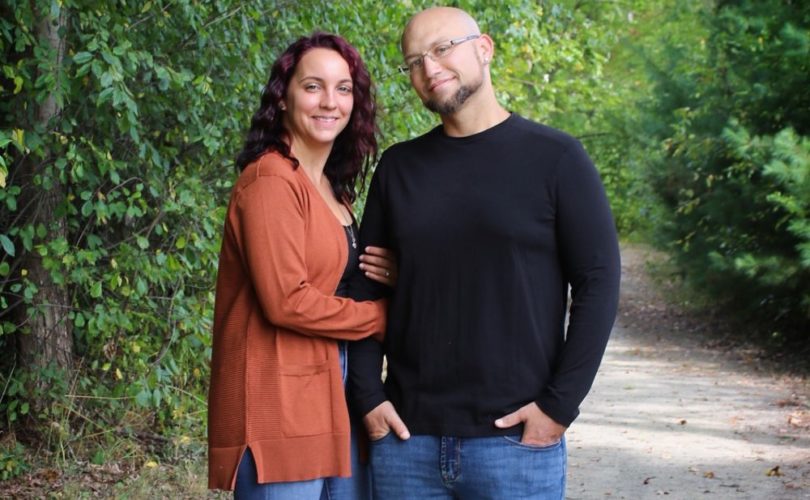 Bernard LaPierre, pictured with his wife Meagan, is being denied a kidney transplant over his refusal to take an experimental coronavirus vaccine.

Worcester, Massachusetts, July 16, 2021 (LifeSiteNews) – A father of three young children has been denied a kidney transplant by UMass Memorial Health Center unless he agrees to take experimental COVID-19 shots before the surgery.

Bernard LaPierre, 37, who has been a Type 1 diabetic since his childhood, was told in 2019 that his kidneys were failing and he needed to be put on the waiting list for a transplant when he was hospitalized for a major reaction to one of his prescription drugs.

LaPierre’s wife Meagan told LifeSiteNews that she has recently completed most of the tests required for donating one of her own kidneys to her husband and “so far, everything looks good” to allow her to be his living organ donor.

The parents of three young boys ages 12, 10, and eight, said all was going well with their preparations for the major dual surgery and they had inquired about vaccination – which they were reluctant to undergo – and were re-assured on “at least three occasions” by UMass personnel that the decision to take any vaccine was their own medical choice.

UMass administration suddenly pivoted its policy, however, said Meagan. According to electronic patient notes she provided LifeSiteNews, a nurse identified as “Linda S.” wrote on June 25 that Bernard had become “understandably… upset” that morning when she told him that a Patient Selection Committee met on June 23 “and while we believe he is a good candidate for transplant, we want him to have the vaccinations recommended (Hep A, Hep B, Prevnar, pneumovax).”

Hepatitis B affects one in 100,000 Americans, according to data from the Centers for Disease Control and Prevention – most of whom are homosexual men or prostitutes with a high number of sexual partners or injection drug users or babies born to infected women.

Both hepatitis vaccines are a series of two doses. Prevnar and Pneumovax are vaccines against different kinds of pneumonia.

LaPierre had pointed out that he was very unlikely for him to acquire sexually transmitted disease from his own wife’s organ.

“I explained that vaccines were recommended to get infections in general rather than those transmitted from his donor,” Dr. Co wrote in Bernard’s progress notes on July 7.

“We talked about the increased risk of infections post-transplant and the possible compromise of his transplant should he develop an overwhelming infection.”

“The patient said he was willing to assume the risks of going without vaccination, but I said that our program is not,” Co wrote.

“I told him that we respected his wishes and concerns but that we, as a program, believe that the benefits of vaccination outweighed the risks and that having these vaccines was important to ensure that he had the best outcome after transplant.”

Meagan LaPierre said she began questioning vaccine protocols that require multiple injections years ago after one of her sons became ill for months with diarrhea and ear infections following an appointment in which he received multiple vaccine shots in the same leg. She and her husband had become especially wary of the fast-tracked, experimental COVID-19 vaccines that are still undergoing clinical trials and have already been unexpectedly linked to serious disorders including blood clotting disorders, inflammatory heart conditions and a paralyzing neurological condition, Guillain Barré Syndrome, and shingles.

No consent to experiment

Bernard, a corrections officer, had said he would agree to the other vaccines but not the experimental coronavirus injections. All current COVID-19 vaccines are still undergoing clinical trials for at least another year and have not been approved by the Food and Drug Administration but granted Emergency Use Authorization Only.

The Nuremberg Code, enshrined after the atrocities against the Jews in World War II, recognizes the individual’s right to exercise the free power of choice to give informed consent or to refuse to any experimental or other medical intervention, free of any constraint or coercion.

UMass has refused the LaPierre’s wishes, however.

“Our policy is that we need to have them vaccinated,” said UMass public relations officer Debora Spano. “Immunosuppressive patients are at higher risk for infections and have poorer outcome. We’re responsible for his outcomes.”

Spano said that the decision came from Adel Bozorgzadeh, chief of division of organ transplantation.

Asked about risks of the vaccine itself, for which the U.S. Vaccine Adverse Event Reporting System has received more than 438,000 reports of adverse events. These include 9,048 deaths and more than 14,000 reports of life-threatening and permanently disabling events.

Spano said, “Our physicians are saying that the chances of a major side effect are still better, and the Pfizer vaccine is 93% effective at preventing COVID and you’re better to be alive.”

“Now, if you’re the person that dies or ends up with myocarditis [from the vaccine] that’s a problem,” Spano said. Asked if the hospital could be liable in that case, if it forced a patient to take an experimental COVID vaccine, she said, “I couldn’t answer that for you.”

In a study published in May in the Journal of the American Medical Association (JAMA), Johns Hopkins Medicine researchers showed that in people who have received solid organ transplants, two shots against SARS-COV-2, the virus that causes COVID-19, does not confer immunity and they are still advised to keep social distancing and masking afterwards.

A clinical trial of a third Pfizer booster shot against COVID to see if it raises immunity in kidney transplant recipients has not yet begun recruiting.

“The bottom line is he did agree to get the vaccinations,” said Spano, who added that he is scheduled for surgery two weeks after his final injections.

Meagan LaPierre told LifeSiteNews her husband has not consented to the COVID-19 vaccines at all, however, and has instead found two other hospitals willing to do the surgery without requiring him to take shots.

— Article continues below Petition —
PETITION: No to government and corporate penalties for refusing COVID-19 vaccine
Show Petition Text
103160 have signed the petition.
Let's get to 125000!
Thank you for signing this petition!
Add your signature:
Show Petition Text

The ordeal of trying to evade vaccination and what the couple see as the unreasonableness of being forced to undertake an experimental injection has led the LaPierres to consider alternatives to transplantation altogether.

In the time that doctors said LaPierre’s kidney damage was irreversible and that transplantation was inevitable, his kidney function has increased from 17% in 2019 to 23% today.

LaPierre underwent a fistula surgery this spring to insert apparatus for dialysis which his doctors thought would be necessary. But so far he hasn’t experienced symptoms of kidney failure, despite his poor lab measurements, and he does not qualify for dialysis at this point. Now the couple is looking at healing by alternative measures before undergoing the transplant, which is risky for them both.

“We’ve hit pause,” said Meagan. They are seeing a doctor about other tests for vitamin deficiencies and ways to strengthen Bernard’s immune system and at the same time, leaving their transplant options at other facilities open.