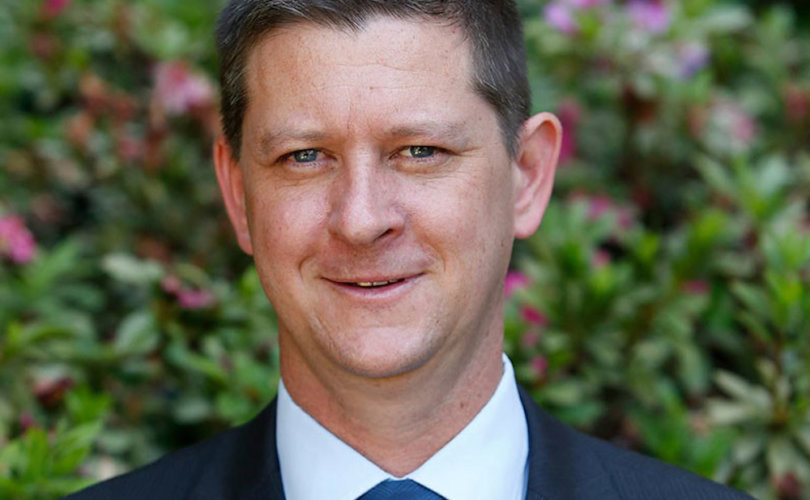 February 6, 2017 (LifeSiteNews) – An Australian Catholic father of seven has won his case in New South Wales after he was accused of vilification for publicly objecting to what he believed was the blatant promotion of homosexuality.

“The New South Wales Court of Appeal handed down a judgment that effectively ended three years of progressive totalitarian action against me – and all Australians who dare to express conservative views,” Gaynor said in a media release. “This victory could not have come without your support. As such, it is not mine. It belongs to all of us.”

The judgment ended nearly three years of costly legal action and effectively terminated 32 complaints (many of which were duplicates) for opposition to homosexual “marriage” brought against Gaynor by Australia's most notorious gay, self-described “anti-free speech” activist, Garry Burns.

One of the complaints against Gaynor came after he objected on his blog to naked gay men exposing themselves to children at the Toronto Pride Parade in Canada. Another resulted from pointing out remarks made by an Australian judge who legitimized incest, saying it was “no longer taboo” because of the cultural embrace of homosexual behavior.

In a telephone interview on Monday with LifeSiteNews, Gaynor said, “I've fought this case very hard for three years now and I think this case sets a huge precedent,” he said.

Up until the ruling, Gaynor faced the prospect of fronting what he calls a “kangaroo court” and being ordered to issue a formal apology and pay fines up to $1.6 million to Burns. Failure to do so could be considered contempt and opened the possibility of Gaynor’s imprisonment.

A “kangaroo court” is a judicial tribunal or assembly that blatantly disregards recognized standards of law or justice, and often carries little or no official standing in the territory within which it resides.

“First of all, this matter ends the tyranny of the NSW anti-discrimination board and its serial complainants from attempting to launch complaints against anybody in Australia and holding them to account against NSW law,” he said. “Secondly it provides great hope to the many, many Australians who want to see these anti-discrimination laws scrapped.”

For now, the ruling still allows costly action against New South Wales residents who dare to express conservative views on marriage and family.

“I am disappointed that the arguments on political communication and religious freedom weren't considered. The judges only ruled on jurisdiction and those battles will come another day,” he said.

“The key takeaway is that we should not be afraid of fighting anti-discrimination laws particularly because it is becoming increasingly evident that the anti-discrimination body themselves are operating entirely outside the law. They are unconstitutional. They are nothing more than political thought police.”

As a result of the ruling, former Victorian political candidate Tess Corbett has also been spared contempt charges that might have resulted in her imprisonment. Gaynor assisted Corbett with her case in 2013, after Burns took her to court for her firm statements on homosexuality.

In one statement, Corbett implied that gays and lesbians were on the same level as pedophiles and emphatically declared that such individuals should not be allowed to work at her kindergarten. She was subsequently found to have engaged in “homosexual vilification,” according to the NSW Administrative Tribunal and ordered to publish a public apology in The Sydney Morning Herald.

“It is clear from today’s ruling and recent revelations about the operation of the Australian Human Rights Commission that the entire anti-discrimination industry is operating outside the law,” Gaynor said. “This industry is best described as a political police force for the Greens [Party].”

“A Royal Commission is warranted into the operations, motives and actions of the henchmen who have become a self-anointed ‘Thought Police’ of Australia and the various states,” he continued.

Gaynor is not confident, though, that a formal inquiry will be conducted. He has given instructions to his legal team to commence legal action against the New South Wales Anti-Discrimination Board as soon as possible.

“I have good reason to believe that this will be successful,” he wrote. “After all, the Acting President of the New South Wales Anti-Discrimination Board has admitted in writing that her organization has breached its own statutory obligations under the Anti-Discrimination Act 1977 (NSW). The Board failed to provide me with information in relation to its ‘investigations’ into me.

“As such, it is appropriate to note that in this lengthy farcical saga the only people to have breached New South Wales anti-discrimination law are those who enforce it. It should not be a surprise at all that this is how ‘Thought Police’ operate.”

He also hopes New South Wales police will take appropriate action against Burns for his decision to contact Islamic organizations and offer them Gaynor’s personal details, including his family’s home address. The subsequent harassment caused “great stress” for the Gaynor family and as a result they were forced to seek residence elsewhere for their own safety.

So far, the police have declined to take any action on the basis that Gaynor was subject to anti-discrimination complaints.

Gaynor said there's a public perception that anti-discrimination activists are nice people, but he argued to the contrary, saying “they have absolutely no regard for the law.”

Gaynor is no stranger to drawn-out court battles in the ongoing fight for Christians to be able to express their opinions and beliefs publicly without hindrance.

LifeSiteNews previously reported that Gaynor was terminated in 2014 by the Australian Army, for whom he served three tours of duty in Iraq, after criticizing Army members for participating in a gay and lesbian parade and expressing his views on Islam.

Gaynor launched a suit in federal court against Army General David Hurley to have the termination decision overturned. Gaynor later won his appeal in the federal court protecting free speech for military personnel when off duty.

However, all action has been stayed in the case pending the outcome of the Department of Defence's appeal.

Gaynor thanked his wife, family and the thousands of Australians who have supported him.

“I could not have defended myself without their generosity and assistance. This victory belongs to all of them,” he said, “and I must thank God as well. He has truly protected me.”

Gaynor currently supports his family primarily through donations sent via his website from generous supporters where he writes what might be deemed as “controversial” and “daring” articles about the loss of Christian values in today's society and its impact on all aspects of life.

Find out how you can support Gaynor here.

Caleb Stephen is a widely-published Christian conservative freelance journalist, columnist and social commentator based in Australia. He is also the founder and Editor-In-Chief of The Caleb Report. Caleb, the oldest in a family of nine, has been an active pro-life advocate for a number of years participating in rallies, political campaigns, multimedia promotion and public events. Caleb is thankful for the opportunity to be one of LifeSiteNews’ Australian correspondents. Visit his website www.calebstephen.com and follow him on Twitter @CalebSOfficial