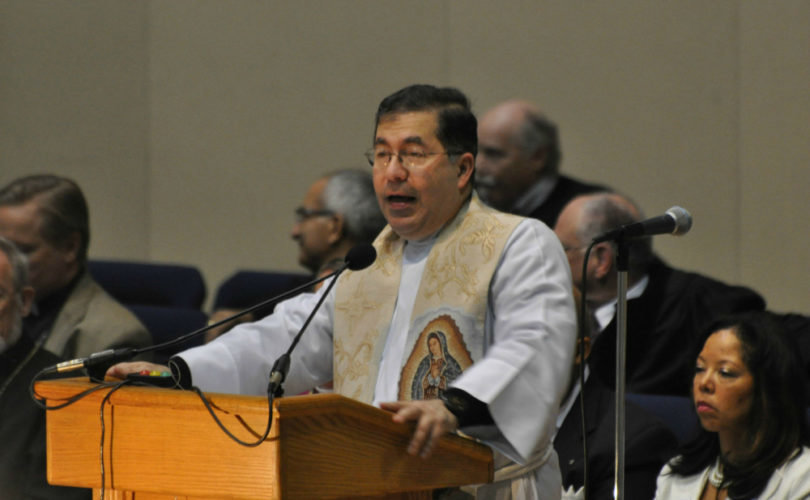 Father Frank Pavone offers Mass at the National Memorial for the Pre-Born and their Mothers and Fathers on January 22, 2015.Lisa Bourne / LifeSiteNews

WASHINGTON, D.C., January 31, 2017 (LifeSiteNews) – Father Frank Pavone never lacks passion in his defense of the unborn, but he was on fire with hope Friday at a prayer service before the annual March for Life.

Speaking sometimes at a fever pitch at the 23rd annual National Memorial for the Pre-Born and Their Mothers & Fathers at DAR Constitution Hall, the national director of Priests for Life told the audience that a new day has dawned for the pro-life movement.

For eight frustrating years under the Obama administration and its pro-abortion policies, Pavone said, “We had to say we're on the side of right and the president is wrong.”

Today, President Trump, Vice President Mike Pence and elected members of the House of Representatives have begun in Washington to restore and expand protections for life.

“This is about a new era of pro-life leadership in our country,” Pavone said. “This is our moment now.”

The White House and Congress in the past two weeks have restored and enhanced the Mexico City Policy to ban federal abortion funding support for foreign organizations and acted on extending the Hyde Amendment.

After meeting with newly elected members of Congress in recent days, Pavone said, “They are just as passionate about this as we are, and they are ready to do the work. They said no matter what agency, no matter what the funding stream is, no federal tax dollars will go for abortion. None.”

Pavone was joined at the prayer service by Pam Tebow, pro-life advocate Alveda King and members of the clergy from a variety of faiths. He drew a parallel between King's uncle, Martin Luther King Jr., the civil rights leader who fought for racial equality, and the pro-life cause.

“We have come to Washington for the very same reason, the call to protect the unborn, to welcome life with the same protection that has come back repeatedly, over and over and over and over again, with a check marked insufficient funds,” Pavone said. “We have had enough of this. We refuse to believe it.”

“Now it's 2017, as we are here today in a new administration that is also saying there are sufficient funds to protect the unborn and we're going to do it. Oh, yes, brothers and sisters, we have a pro-life president. We have a pro-life Congress.”

And Pavone, who was a member of Catholic and pro-life advisory boards for the Trump campaign during the 2016 election, expects a Supreme Court nomination to be brought forth soon to replace conservative Justice Antonin Scalia, who died a year ago.

“I can tell you right now it will be a pro-life justice,” Pavone said. “And we're going to see a vote in the Congress to defend Planned Parenthood.”

While acknowledging that some pro-lifers were reticent of Donald Trump's pro-life convictions, Pavone made it clear that the new president not only has exceeded expectations after just two weeks in office but achieved one of his greatest victories before taking over the White House.

“He has already done a magnificent thing for the pro-life movement unequaled by anything anyone else has done. We have Hillary Clinton out of the White House,” Pavone said, drawing the biggest ovation of his 16-minute presentation. “Thank you, President Trump, for what you have already done.”

Fr. Pavone implored clergy not to stand on the sidelines in silence.

“Don't let anyone tell you these have to be kept separate. We're proud to say that we're part of the process by which we elect leaders that are going to follow God's law and stop the shedding of innocent blood.”

He went on to issue a warning for politicians, co-workers, family and friends who equate social justice causes with pro-life work.

“I'm talking about even some religious leaders,” Pavone said. “They will say, 'Oh, yeah, I'm pro-life because I help the poor and I feed the hungry and I want to end of the death penalty and I'm working for peace on earth.”

“Hey, listen, we say amen to all those things. But so many of those people who claim to be fostering human rights, human dignity and social justice have a little poison pill hiding behind their rhetoric. And it is they refuse to speak up for the unborn.”

Fr. Pavone cautioned pro-lifers to continue to work at all levels to advance the cause and not to expect new leadership in Washington to do all the heavy lifting.

“I was told, 'We will do everything that every previous pro-life president has done and more,'” Pavone said. “We've been told at different times that we've got to wait and see. Let's wait and see if this man fulfills his promises. Some have wondered, is he really pro-life? Brothers and sisters, he is.”

The ultimate goal is for the courts to overturn the 1973 Roe v Wade decision legalizing abortion in the U.S. by “standing up for them.”

“We're speaking for them, we're marching for them and, yes, we will succeed in protecting them,” Pavone concluded.