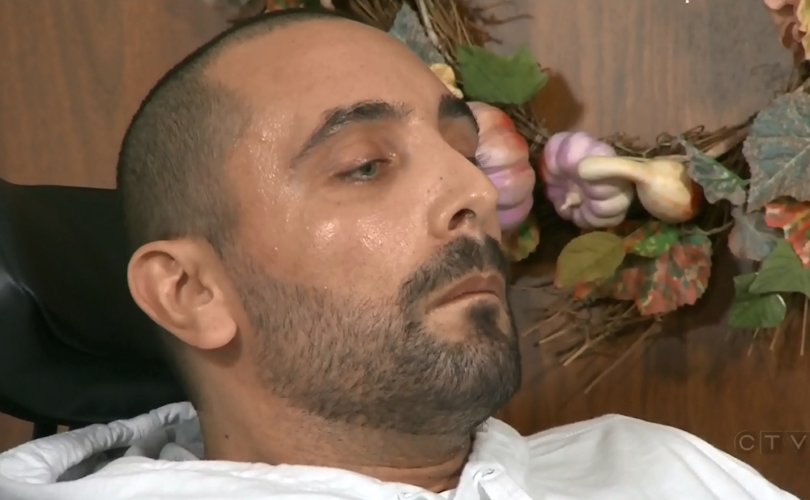 OTTAWA, Ontario, November 17, 2016 (LifeSiteNews) – A group of Canadians with Amyotrophic Lateral Sclerosis is lobbying quietly for a “Right to Try” law allowing doctors to treat terminally-ill patients with unproven and unapproved procedures and drugs.

This week, Gino Sisera, a 34-year-old father of two dying of ALS, was featured on CTV News and lamented his plight. “Right now, there is only one outcome in my future.” Noting the recent passage of Bill C-14 legalizing euthanasia and assisted suicide, he asked, “If terminally ill patients have the right to end our lives, why aren’t we allowed to try promising experimental treatments?”

The federal government’s Special Access Program provides some leeway for the use of unapproved drugs and procedures, but it is severely restricted, according to Jeffrey Perreault, the co-founder of Right to Try Canada.

What’s worse for a terminally ill patient is that getting drugs and procedures approved takes years. “We don’t have years,” Perreault told LifeSiteNews. “We’re dying.”

Also, the Special Access Program won’t cover a non-drug treatment such as stem cells. Perreault says there is no drug or procedure in any stage of development for ALS, but adult stem cell injections do offer some hope — but cannot legally be given to Canadian patients.

Right to Try Canada is having encouraging talks with Health Canada, says Perreault, as well as with a group of sympathetic Liberal MPs who made a presentation before the House of Commons caucus last week on the subject.

Right to Try co-founder Owen Thomas, a Nova Scotia lawyer with ALS, has drafted a Right to Try bill that would protect doctors, researchers and suppliers from malpractice or negligence lawsuits. The bill would be limited to mentally competent, terminally-ill adults. The cost of treatment would be up to the patient to provide, says Perreault, but all patients could potentially benefit from proving whether the treatment works or does not.

Perreault wants patients to be able to get potentially curative treatments even after clinical trials are over, at which point patients are usually cut off.

Perreault is particularly keen on marrying up an adult stem cell treatment for ALS developed by an Israeli-American company called Brainstorm with a method pioneered by a University of Toronto team using MRI-focused Ultrasound to target stem cells for use treating stroke victims. The Brainstorm’s method, developed at the Hadassah Medical Centre in Jerusalem, is too invasive, says Perreault, the founder of a company that cleans mining equipment.

Perreault has also founded a fundraising charity, the Adaptive Canuck ALS Foundation to bring Brainstorm, which he says is “cash starved,” to Canada, and to fund other treatments that arise.

There is opposition to Right to Try legislation, which has passed in 32 U.S. states in the past two years. Bioethicists call the laws “toothless” because they only waive federal regulations but do not compel doctors or pharmaceutical companies to provide treatment. It is claimed they are unconstitutional because state laws cannot overrule federal laws and would fail if challenged by federal regulators. This is not a problem with the Canadian proposal for a federal law.

Ethicists also complain that the law allows drugs to be used before there is evidence they work, which effectively means patients lack informed consent.