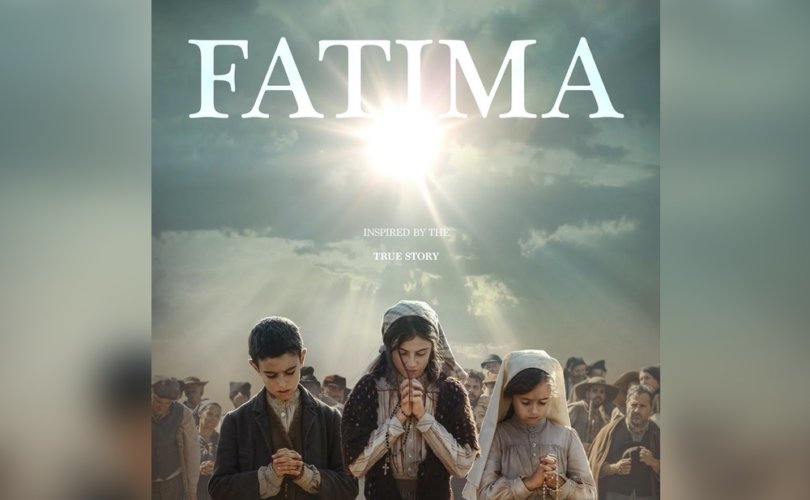 HOLLYWOOD, California, March 2, 2020 (LifeSiteNews) ― A blockbuster film about Our Lady of Fatima will hit cinemas across America in April. The official trailer was released last week.

FATIMA will tell the real-life story of three children from rural Portugal, Lucia dos Santos and her cousins Francisco and Jacinta Marto, who experienced apparitions of a beautiful lady eventually identified as Mary, the mother of God.

As the trailer reveals, the children suffered many hardships because of their visions. They were accused of lying by their parents and Church authorities and were even taken into custody by police. However, they are believed by many of their neighbors and by thousands of pilgrims who come to Fatima in the hopes of witnessing a miracle.

“The key inspiration for the movie was Sr. Lucia’s memoirs, which details the experiences of the last remaining Seer, and her relationships, from her point of view,” producer Natasha Howes told LifeSiteNews via email. “There are artistic liberties taken in some of the key story elements that differ from the documented history of Fatima, and those are primarily found in the characters and their function in the dramatic arc. For example, Manuel, Lucia’s brother, did not serve in the First World War; however, his role in the film is to firmly place the contemporary political climate into the local and emotional experience.”

Howes told LifeSiteNews that “authenticity is a key quality of the FATIMA movie’s aesthetic.” Most of the actors are from Portugal.

“And so presenting a community of people that look Portuguese was crucial to the historical accuracy of the film,” she explained. “The majority of the actors that appear in the movie are from Portugal, including Lucia Moniz (Maria, Lucia’s mother) and Joaquim de Almeida (Father Ferreira), who are well-known and recognized internationally.”

“The lead roles of the Children of Fatima were cast out of Madrid, and all three of the young actors are Spanish. The most recognizable stars, including Harvey Keitel, Sonia Braga, Goran Visnjic and Joaquim de Almeida, are all U.S.-based, and travelled to Portugal for the filming,” Lowes continued.

The film was entirely shot in Portugal. Lowes explained:

Fatima today is very different to how it was in 1917, although much of Portugal retains its rurality. The City of Fatima has been built around the original site of the Apparitions and Miracle, which was a rocky mountainous field. We filmed those scenes in a National Park, called Tapada de Mafra, which was confirmed by the Shrine of Fatima, who visited set one day, to be identical in topography to the Cova da Iria, where Our Lady appeared. We built the Santos home in studio in Lisbon, and filmed in various locations throughout Portugal, including: Sesimbra, Tomar, Coimbra, which is the original convent home of Sr. Lucia, and a village in the North of Portugal as Aljustrel, where the Children of Fatima lived.

At over 1,564,625 Facebook views by press time, the trailer has already gone viral.

The film will be released across the U.S. on April 24, and tickets are now available for various cinemas, including AMC, Cinemark, Harkins and Regal.

FATIMA has been endorsed by a spokesperson for the Shrine of Our Lady of the Rosary of Fátima in Portugal, who said, “Inspired by the story of Our Blessed Virgin Mary’s appearances to three children, the movie … shows why it is still possible for humanity to believe in divine intervention, even in our contemporary world. The film leads us to reflect that 100 years later, the light of God that the Virgin Mary shined upon Francisco, Jacinta and Lucia still lights the way for those who commit to a life of faith in the Gospel.”