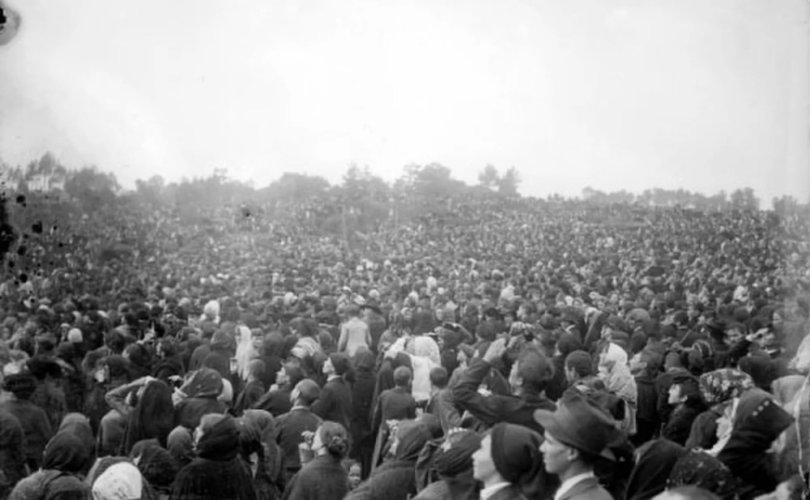 Editor’s Note: LifeSiteNews is republishing its report from the centenary of the Miracle of the Sun at Fatima, originally published on October 13, 2017, for today’s anniversary.

BUCKFAST ABBEY, England, October 13, 2017 (LifeSiteNews) — The Miracle of the Sun which took place in Fatima, Portugal, exactly one hundred years ago today (on October 13, 1917), was one of the most extraordinary events of the 20th century.

An estimated 70,000 people witnessed the Miracle of the Sun, both believers drawn by the Blessed Virgin Mary’s promise to the three shepherd children the previous July that she would perform a miracle in October, and many sceptics and unbelievers who were drawn for lesser motives.

At noon, Our Lady appeared to the three children. After repeating her requests for the daily rosary, she promised that World War I would soon end. Then she said to the children: “Do not offend the Lord our God any more, because He is already so much offended.”

What then unfolded was reported by the secular Lisbon newspaper O Dia, in this way:

The silver sun … was seen to whirl and turn in the circle of broken clouds. A cry went up from every mouth and the people fell on their knees on the muddy ground. … The light turned a beautiful blue as if it had come through the stained-glass windows of a cathedral and spread itself over the people who knelt with outstretched hands. The blue faded slowly and then the light seemed to pass through yellow glass. … People wept and prayed with uncovered heads in the presence of the miracle they had awaited. The seconds seemed like hours, so vivid were they.

The event was declared of “supernatural character” by the Catholic Church in 1930.  But was the Miracle of the Sun a strange demonstration of divine power, or was the particular form of the miracle somehow symbolic, or even scriptural?

LifeSiteNews attended a conference commemorating the Fatima centenary at Buckfast Abbey in Devon, England. Among other featured speakers, including Cardinal Raymond Burke, Fr. John Hunwicke offered a biblical and patristic interpretation of the Miracle of the Sun.

A century after the sun danced down upon the earth, we offer LifeSite readers this important analysis of the miracle’s deeper meaning.

The Miracle of the Sun I think is very interesting biblically, because it bears upon the way in which Almighty God bears witness to His own truth. Sometimes God takes the line of “Blessed are those who have not seen, and yet believe,” as he said to St. Thomas on that Sunday evening after Easter. Sometimes, on the other hand, he says: “Father (and then makes a request), in order that they may believe.” In other words, on account of the crowd standing around, he asks for a wonderful sign which will witness to the truth of the Gospel Message.

And I want to begin by pointing out the description of Our Blessed Lady in Chapter 12 of the Book of the Apocalypse, where she is called the “Woman clothed in the Sun.” The actual Greek word there is a word that means a ‘wrap around,’ as if she had a long cloak, and it was the sun, and she just threw it around herself, wrapped herself in the sun. She is girded in the sun.

In the sun, He has placed his tabernacle, and he himself like a bridegroom going forth from his chamber, has rejoiced like a giant to run his course. From highest heaven is is going forth and his meeting is to the highest, neither is there one who might hide himself from his heat.

It comes into patristic writings and ancient hymns and liturgies a great deal. Our Catholic and our Orthodox forbearers took the sun to be Our Blessed Lady. St. Sophronius, Patriarch of Jerusalem from 634 onwards, writes: “For in thee, O Virgin, as in a most pure and sparkling heaven, God has placed his tabernacle.” The Fathers understood the Bridegroom to be Christ. The bridal chamber is the womb of the Blessed Virgin because in that womb He united the Godhead with manhood in the hypostatic union,” just as bridegroom is united to bride. And he, our Incarnate Lord, is a giant because he has two natures: his human and his divine nature. His going forth is his eternal generation as the divine and Only Begotten Son from the Father. His meeting is the Son’s equality with the Father. And in the Church’s liturgy — let us take an Advent Office hymn — “Thou camest, the bridegroom of the bride, as drew the world to eventide/proceeding from the virgin shrine/ the spotless victim all divine.” And a hymn of St. Ambrose, the Veni Redemptor gentium: “Forth from his chamber goeth he/that royal home of purity/ a giant in twofold substance one/ rejoicing now his course to run. From God the Father he proceeds/ to God the Father back he speeds/ his course he runs to death and hell/returning on God’s throne to dwell.” And one last ancient patristic early Christian hymn. “The Son of the highest Father has gone forth from the palace of the Virgin/ bridegroom, redeemer, creator, the giant of his Church.”