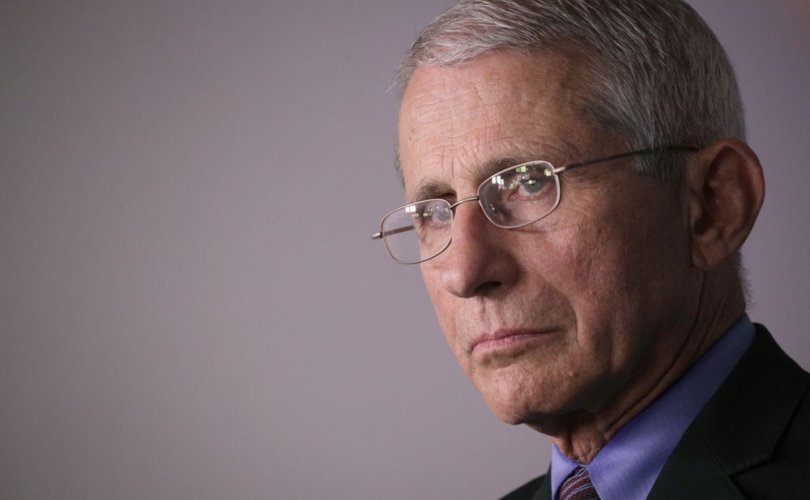 WASHINGTON (LifeSiteNews) – Dr. Anthony Fauci and top Democrats are publicly admitting that COVID vaccine efficacy is failing while pushing booster shots, which the U.S. Food and Drug Administration (FDA) and Centers for Disease Control and Prevention (CDC) approved Friday for all American adults.

In multiple interviews Tuesday, Fauci acknowledged that a “significant” amount of vaccinated Americans are being hospitalized for COVID-19 and said that he thinks boosters are “going to become a part of the standard regimen.”

The scandal-ridden presidential COVID adviser said in an interview aired at the 2021 STAT Summit that, “when you have a virus as transmissible as delta, in the context of waning immunity, that dynamic is going to negatively impact even the vaccinated people.”

“You’re going to see breakthrough infections, even more so than we see now among the vaccinated,” he said. Fauci, who heads the National Institute of Allergy and Infectious Diseases (NIAID), added that he now thinks booster shots “are essential for an optimal vaccine regimen.”

A booster isn’t an add-on and a booster is part of what the original regimen should be. So that when we look back on this, we’re going to see that boosters are essential for an optimal vaccine regimen.

He reiterated those remarks in a separate interview Tuesday with Axios, saying that “boosters are ultimately going to become a part of the standard regimen and not just a bonus.” “As every month goes by, the immunity wanes more and more. So as time goes by, you’re going to see more vaccinated people” losing protection against the virus, he told the outlet.

“What we’re starting to see now is an uptick in hospitalizations among people who’ve been vaccinated but not boosted,” Fauci also told NBC News. “It’s a significant proportion, but not the majority by any means.”

Reports of the vaccinated dominating COVID hospitalizations have been commonplace in recent weeks, however, both in the U.S. and abroad.

Leaked data from the Department of Defense last month showed that around 60 percent of older Americans hospitalized with coronavirus by August were “fully vaccinated.” In Vermont, almost three-quarters of COVID-19 deaths in September were vaccinated, reflecting a wave of breakthrough cases across the Northeast. Sweden and the U.K. have reported similar trends.

The efficacy of all three COVID vaccines approved for use in the U.S. has fallen significantly since the beginning of 2021, according to a study published earlier this month in Science. The Pfizer-BioNTech vaccine’s protection against infection dropped to just 43 percent in October, down from 86 percent in February, and Moderna’s jab declined to 58 percent from 89 percent. The Johnson & Johnson shot fell to just 13 percent efficacy.

VAERS has been found to undercount adverse reactions by up to 99 percent, and experts have estimated the true death toll from the vaccines at more than 50,000.

Israeli data published in August showed that around one-third of Israelis given booster shots experienced side effects, while one in 100 required medical care.  CTV News reported last week that an Alberta man spent six days in the hospital and was diagnosed with endocarditis following a “premature” booster. A prominent Canadian doctor known for denigrating the unvaccinated passed away at 52 years old days earlier, just two weeks after his third shot.

Citing waning immune responses, the FDA and CDC on Friday approved booster shots with the Moderna and Pfizer vaccines for all U.S. adults.

The agencies had endorsed boosters for the elderly and immunocompromised two months ago, after an FDA advisory panel rejected the Biden administration’s plan to start rolling out third jabs for the general public in September.

“We have an unclear need with unclear motivation, significant safety concerns, poor evidence of sustained boost efficacy, and wrong priorities,” vaccine expert Dr. David Wiseman told the panel, the Vaccines and Related Biological Products Advisory Committee. “If FDA cannot assure us of the safety of two doses, how can they assure us of three? We see strong signals for death (myocardial infarction and coagulopathy) that need transparent investigation.”

The FDA declined to hold another meeting of the panel before commissioner Janet Woodcock expanded booster eligibility Friday. A press release from the FDA said that after reviewing new data submitted by Pfizer and Moderna, “the FDA concluded that the requests do not raise questions that would benefit from additional discussion by committee members.”

The White House’s aggressive push for booster shots amid Joe Biden’s failing approval ratings on his handling of COVID-19 led to resignations of multiple top FDA officials earlier this year.

Around 33.5 million Americans have received a booster shot to date, according to CDC data.

Democrats have already begun updating the definition of “fully vaccinated” to include boosters, with Connecticut Gov. Ned Lamont saying Wednesday that no one should “consider themselves fully vaccinated” six months after a second dose.

Democratic New Mexico Gov. Michelle Lujan Grisham made similar comments at a briefing Wednesday. “Because we were so early, that six months where immunity starts to wane, means that we’re more susceptible, potentially, to that virus as its moving,” Grisham said.

“We are analyzing what we can do to create those incentives and potentially mandates for making sure that people are fully vaccinated which means three vaccines,” she added.

Several countries, including Israel, Austria, and Croatia, announced plans this summer to cancel COVID-19 passports for those without three jabs, LifeSiteNews reported.