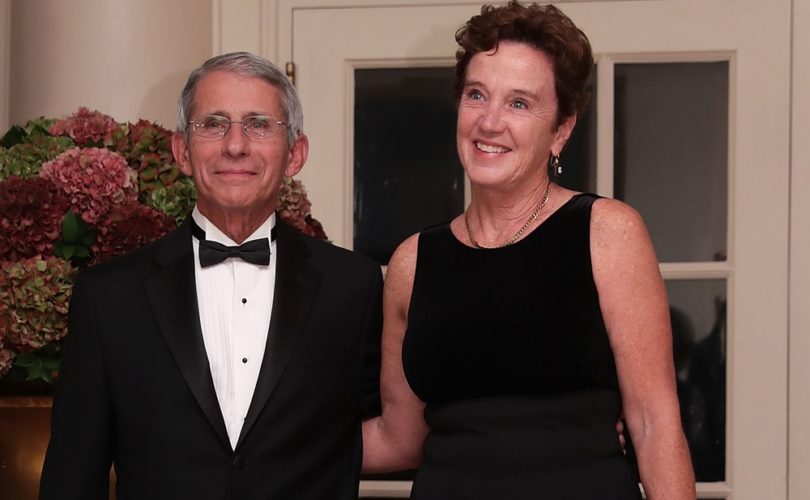 (LifeSiteNews) – Dr. Anthony Fauci and his wife, Dr. Christine Grady, will receive an award from a Catholic charity for their “significant contributions to the Catholic Church and particularly to America’s men and women religious.”

The couple are to be presented the Saint Katherine Drexel award from the non-profit group Support Our Aging Religious! (SOAR!) in a virtual event on November 5. The award is given to individuals or organizations who have “significant contributions to the Catholic Church and particularly to America’s men and women religious.”

The most recent Saint Katherine Drexel award was given to Cardinal Joseph Tobin in 2018.

Founded in 1986, SOAR! “raises funds and provides grants to help Catholic religious congregations in the United States care for their elderly and infirm members.”

The annual awards gala is now in its 35th year, but will be held online for the second consecutive year.

SOAR! did not specify the doctors’ contributions to the Catholic Church. LifeSiteNews contacted SOAR! but was unable to properly reach them due to their scheduling arrangements.

Fauci himself was raised Catholic and attended Our Lady of Guadeloupe Grammar School in Brooklyn, the Jesuit-run Regis High School in Manhattan, and later the College of the Holy Cross in Massachusetts.

Despite this Catholic upbringing and education, Fauci has previously explicitly stated that he does not view himself as Catholic.

“I am not a regular church-attender. I have evolved into less a Roman Catholic religion person to someone who tries to keep a degree of spirituality about them,” he said during a 2015 interview. “I look upon myself as a humanist. I have faith in the goodness of mankind.”

What ‘significant’ contribution to the Church?

As a self-proclaimed “humanist,” Fauci was given an award by the American Human Association earlier this year, when the group proclaimed him its 2021 “Humanist of the Year.”

The director of the National Institute of Allergy and Infectious Diseases (NIAID) has come under increased scrutiny in recent weeks as damning evidence continues to emerge showing that Fauci funded coronavirus research at the Wuhan lab (despite his denials) and has even been described as the “godfather” of the COVID-19 “pandemic.”

Fauci is one of the foremost proponents of the abortion-tainted COVID-19 injections, welcoming vaccine mandates even for young children.

In the past few days, Fauci has also come under increased scrutiny from both sides of the political divide when documents claimed that he conducted drug research on puppies after having removed the dogs’ vocal chords so as not to be bothered by their barking.

As Kevin Burke wrote, “It is a sign of the times that while Fauci’s NIH has been complicit in gruesome medical experimentation on live aborted babies, and the cover-up of “gain of function research” in the origins of the pandemic, it may be the hideous torture of dogs that will finally end the reign of Dr. Fauci-Stein.”

Meanwhile, Grady has garnered much less media attention than her husband, yet her role in the current political and medical situation in America is by no means inconsequential.

Grady leads the Department of Bioethics at the National Institutes of Health (NIH) and is head of the Section on Human Subjects Research. As such, she has quietly become a key figure in medical research and medical ethics in America.

Fauci’s NIAID is guided by the ethics of the NIH, meaning that Grady’s decisions on ethics are intimately linked to and inform her husband’s decisions on vaccine research and development. The NIAID participated in the development of COVID-19 vaccines (namely the Moderna jab) and the trials of the vaccines.

In her 2004 paper entitled “Ethics of vaccine research,” Grady advocated for the goal of vaccination “to benefit the community at large rather than the individual.” That philosophy is echoed by America’s governing health bodies today, who continue to recommend the COVID-19 injections as a good for the wider community despite the growing number of adverse reactions, arguing that the benefits outweigh potential risks.

Grady has also written to promote radical experiments on fetal therapy trials under a “new ethical framework,” which would be acceptable even if they had a “mildly unfavorable risk-benefit ratios for pregnant women and/or fetuses.”