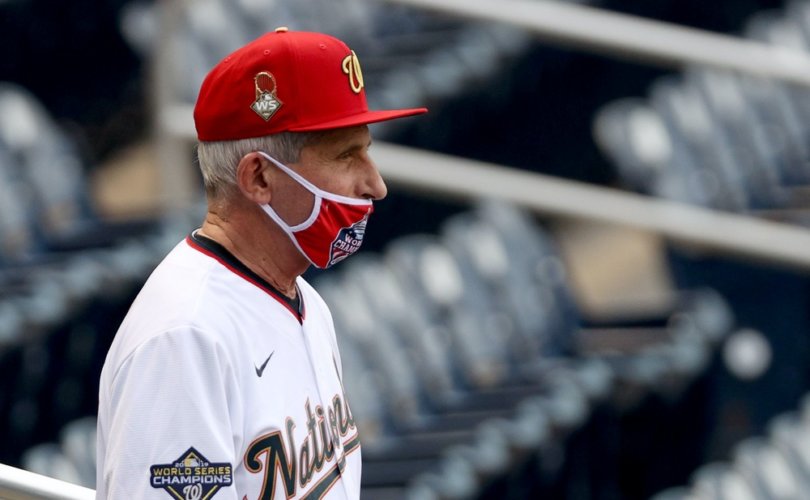 WASHINGTON, D.C., September 16, 2020 (LifeSiteNews) – Dr. Anthony Fauci said it could take as long as “towards the end of 2021” for life after COVID-19 to be back to normal. Fauci is the director of the National Institute of Allergy and Infectious Disease (NIAID) and President Donald Trump’s top advisor during the coronavirus crisis.

“If you’re talking about getting back to a degree of normality which resembles where we were prior to COVID, it’s going to be well into 2021, maybe even towards the end of 2021,” he said on Friday during an interview with MSNBC.

Fauci was talking about a scenario where a COVID-19 vaccine was ready to go very by the end of the year, or at least early next year. He cautioned that “by the time you mobilize the distribution of the vaccine and get a majority or more of the population vaccinated and protected, that’s likely not going to happen until the end of 2021.”

The Trump campaign, meanwhile, wrote in an email that “anti-vaccine conspiracy theories” could lead “to more Americans dying from the coronavirus.”

President Donald Trump himself had said that the vaccine would be voluntary. At the same time, the campaign email stressed the safety of the potential vaccine.

“President Trump has moved mountains to produce a life-saving safe vaccine in record time,” the email stated. “Perhaps that scares Joe Biden, who botched the response to the 2009 H1N1 swine flu pandemic so badly that his former chief of staff Ron Klain admitted it was only pure luck that it wasn’t ‘one of the great mass casualty events in American history.’”

The Trump campaign argued both Joe Biden and his running mate Kamala Harris were being “reckless and wrong” for refusing to say they will take the vaccine.

Whereas people protesting the lockdowns, mask mandates, and mandatory vaccines, are in general more likely to vote for Trump, people supporting the Democrats tend to be more supportive of governments imposing vaccinations.

Now, however, given that Trump is making sure the vaccine is ready as soon as possible, Democrats have suddenly emerged as vaccine critics, questioning the safety of the product developed during the Trump administration. In turn, the president’s campaign is attacking Democrats from the left, saying they’re “reckless and wrong” in their refusal to support the distribution of a potential COVID-19 vaccine.

A large – and growing – number of Americans have said they would not get the vaccine.

“Fifty-one percent of U.S. adults now say in a Sept. 2-6 poll that they would get a COVID-19 vaccination if one became available, representing a decline of 21 percentage points over the past five months,” reported Morning Consult. “This includes double-digit decreases among men, women, Democrats, Republicans, independents, residents of urban, suburban and rural environments and respondents of all levels of education.”

A petition against mandatory vaccinations launched by LifeSite less than two months ago has garnered over 865,000 signatures and can still be signed HERE.

In addition to his comments about vaccines, Dr. Fauci also warned about a supposed greater risk of transmitting and contracting COVID-19 in the upcoming months. “Being indoors absolutely increases the risk,” he said. “I am concerned when I see things starting indoors, and that becomes more compelling when you move into fall and winter season.”

During a webinar last Friday, the head of NIAID criticized American citizens for not adequately changing their behavior during the lockdowns imposed by governments. “When you’re dealing with a situation that requires behavioral change, we in the United States have a significant issue that I’m very disappointed in,” he lamented.

Fauci warned young people, who are very unlikely to die from the coronavirus, not to forget “their societal responsibility to not propagate the outbreak because if they get infected, they’re likely going to infect someone else who then might infect someone who really is vulnerable and will have a serious severe consequence.”

Fauci’s expertise has been questioned during the course of the coronavirus crisis. Early on, he had advised against wearing a mask, only to change his position later and strongly recommend wearing face coverings.

“I don’t regret anything I said then because in the context of the time in which I said it, it was correct,” Fauci defended himself. “We were told in our task force meetings that we have a serious problem with the lack of PPEs and masks for the health providers who are putting themselves in harm’s way every day to take care of sick people.”

Fauci has also been criticized for suggesting in April that using hookup apps like Tinder to meet strangers for sexual encounters at the height of the lockdowns was simply a question of “relative risk.”

“If you’re willing to take a risk—and you know, everybody has their own tolerance for risks—you could figure out if you want to meet somebody,” he said. “And it depends on the level of the interaction that you want to have. If you’re looking for a friend, sit in a room and put a mask on, and you know, chat a bit. If you want to go a little bit more intimate, well, then that’s your choice regarding a risk.”

Only a couple of weeks earlier, Fauci had said, “I don’t think we should ever shake hands ever again, to be honest with you. Not only would it be good to prevent coronavirus disease, it probably would decrease instances of influenza dramatically in this country.”